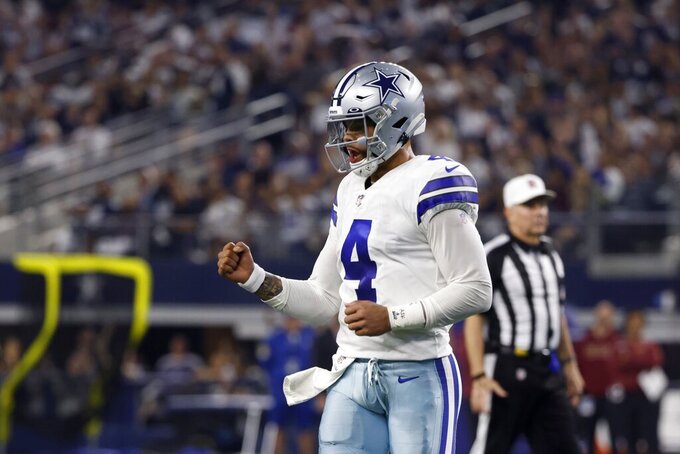 ARLINGTON, Texas (AP) — The most complete victory of the season for the Dallas Cowboys came just in time for them to try to stay in the running for the No. 1 seed in the NFC.

The Cowboys had touchdowns on offense, defense and special teams in the same game for the first time in nine years in a 56-14 rout of Washington.

Dak Prescott spread his four touchdown passes, all in the first half, to a running back, receiver, tight end and offensive lineman. The only other quarterback to do that was Kurt Warner in a St. Louis playoff game for the “Greatest Show on Turf” during the 1999 season.

The Cowboys had four receivers with at least 50 yards each in a half for the first time since at least 1981, according to club research.

Prescott never would say he was in a slump even though the numbers did. Now he's not, and the Cowboys (11-4) have a four-game winning streak with reeling Arizona (10-5) set to visit Sunday.

Dallas, which clinched the NFC East title about an hour before kickoff against Washington, is a game behind NFC-leading Green Bay with two to go. So are the Los Angeles Rams and Tampa Bay.

“It's good to celebrate a goal you set out at the beginning of the year,” said Prescott, who threw for 330 yards as the Cowboys had their most yards (497) since a six-game roll to start the season.

“We’re trending in the right direction for our ultimate goal of what we really want to do,” he said. “So it was a good celebration but as I said nobody’s satisfied with this celebration.”

The Cowboys tied a club record with their third blocked punt of season. It was the second recovered for a touchdown, with Corey Clement's block bouncing conveniently to Chauncey Golston at the goal line for a 49-7 lead in the third quarter.

Terence Steele's sense of history. The backup tackle was so excited about his 1-yard touchdown catch, his exuberant spike ended up in the stands. Running back Ezekiel Elliott, a veteran of touchdown celebrations, retrieved the ball while everybody else mobbed Steele.

“Shoutout to Zeke, because I want that ball,” said Steele, who gave Mike McCarthy a bear hug that jarred the coach enough for him to “check my teeth.” “That’s something I’m going to cherish forever.”

The victory over Washington was the best illustration so far of what the receiving trio of Amari Cooper, CeeDee Lamb and Michael Gallup can bring.

Each had a catch of at least 24 yards. Lamb got the second TD drive going with consecutive catches for first downs, and Cooper kept it alive with a third-down grab. Gallup had the longest catch among the three, a 40-yarder. Prescott capped his highly productive first half with a 13-yard scoring toss to Cooper for a 42-7 lead with 5 seconds remaining.

Their halftime totals were the final ones — seven catches, 85 yards for Cooper; four for 66 for Lamb; and two for 53 for Gallup. Tight end Dalton Schultz (seven for 74) was the other with more than 50 yards at the break.

“We’re not designed just to throw the ball to one guy,” said McCarthy, who is in his second season with Dallas. “I made that clear the day I arrived here.”

Prescott was so dominant with his passing, it's hard to tell if the running game is coming around. There are signs it might be. Elliott says his ailing right knee keeps getting better, and it looks that way when he runs.

The numbers are still paltry, though. The two-time rushing champ had 37 yards as the team finished with 108. A 100-yard game, which Elliott hasn't had since Week 5, would be a better sign of his recovery.

Rookie CB Kelvin Joseph got his first career start with Jourdan Lewis sidelined by COVID-19. Lewis and S Malik Hooker should be in line to return from the virus list. DT Osa Odighizuwa did return. LT Tyron Smith (ankle) could be back after missing the past two games.

19 — The number of Dallas players to score touchdowns this season, a club record. DeMarcus Lawrence broke the previous mark of 17 with his 40-yard interception return in the first quarter. Golston made it 19.

The Cowboys figured to be chasing Arizona if they still even had a shot at the NFC's top seed in their regular-season home finale. Now it's the other way around with the Cardinals at 3-5 since their 7-0 start. It will be the second year in a row for Arizona QB Kyler Murray to play in the stadium where he starred in the playoffs in high school. The Cardinals won 38-10 last season.