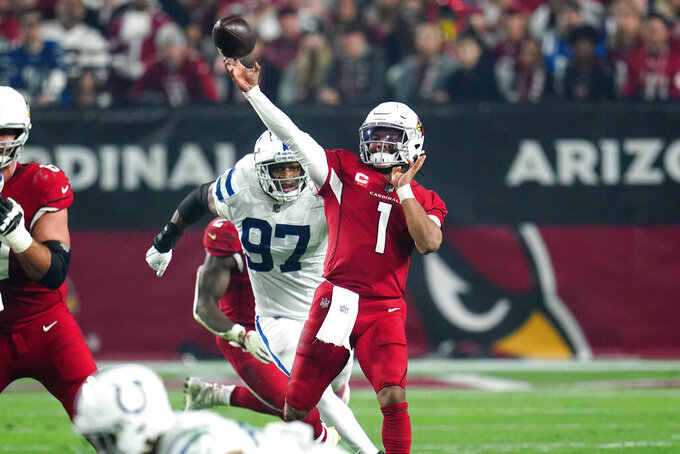 BETTING LINE: Cowboys by 5½, according to FanDuel SportsBook.

TURNOVER DIFFERENTIAL: Cardinals plus-10; Cowboys plus-14.

CARDINALS PLAYER TO WATCH: C Rodney Hudson. A center might be a strange suggestion, but Hudson's expected return from the COVID-19 list is a big boost. Arizona is 8-2 with the three-time Pro Bowler and 2-3 without him. The question is whether Hudson will be in game shape.

COWBOYS PLAYER TO WATCH: CB Trevon Diggs leads the NFL with 11 interceptions, the most in the league in 40 years, when Everson Walls set the Dallas club record with 11 as a rookie. Lester Hayes had 13 for Oakland the year before Walls. The NFL record is 14 by Night Train Lane for the Los Angeles Rams in 1952.

KEY MATCHUP: Cardinals QB Kyler Murray vs. Cowboys LB Micah Parsons. The Dallas rookie is the most logical choice to track the quick and speedy Murray because Parsons' speed is a big reason he's just 1½ sacks from the NFL rookie record of 14½ by Jevon Kearse for Tennessee in 1999. Sacks won't necessarily be the focus against Murray as much as limiting his big gains as a runner.

SERIES NOTES: While the Cowboys have a big edge overall, the Cardinals lead 6-4 since the NFC East rivalry ended with Arizona's move to the NFC West. The Cardinals lead 9-7 since winning the only playoff meeting during the 1998 season. Arizona is 2-0 at AT&T Stadium.

STATS AND STUFF: Arizona and Dallas are two of five NFL teams with turnover margins of plus-10 or better. ... The Cardinals have lost three straight games since starting the season 10-2. They still qualified for the playoffs last weekend for the first time since 2015 because the LA Rams beat Minnesota. ... The Cardinals are an NFL-best 7-1 on the road. After starting 7-0 away from home, they lost 30-12 at Detroit on Dec. 19. ... Murray needs three passing touchdowns to become the first player in NFL history with 70 TDs passing and 20 rushing in his first three seasons. He is 7-0 as a starter at the home of the Cowboys after winning in his first appearance as a pro there last season. The first five victories were in the playoffs for Allen High School, north of Dallas. The sixth was the Big 12 championship game against Texas in 2018. ... Edge rusher Chandler Jones needs half a sack to reach 10 sacks for the seventh time in his 10-year career. ... The Cowboys have won four consecutive games and wrapped up the NFC East title. Dallas is headed to the playoffs for the first time since 2018. ... Dallas needs a victory to keep pace with NFC North-leading Green Bay (12-3) in the race for the conference's top seed and first-round bye. ... The Cowboys lead the NFL in scoring offense (30.5 points per game) and takeaways (33). Only five teams have led the league in each category since 1970, with three of them making the Super Bowl and the 1971 Cowboys winning the title. ... QB Dak Prescott needs 72 yards passing and one touchdown for a second consecutive full season with at least 4,000 yards and 30 TDs. He has 21 touchdowns (20 passing, one rushing) and two interceptions in seven home games this season. ... TE Dalton Schultz has career highs in catches (69), yards (733) and receiving TDs (six). ... The Cowboys have a team-record six defensive touchdowns. The most recent was DE DeMarcus Lawrence's 40-yard interception return last week against Washington. ... Diggs leads the NFL with 21 pass breakups. Since that became an official stat in 1999, he is the only player with at least 11 interceptions and 20 pass breakups.

FANTASY TIP: Cowboys RB Ezekiel Elliott might believe he has something to prove. Last season's loss to Arizona in Week 6 was the first game after Prescott's season-ending ankle injury, and the only time in Elliott's career he lost two fumbles in the same game. Elliott has looked more explosive in recent weeks and is coming off his second two-TD game of the season.