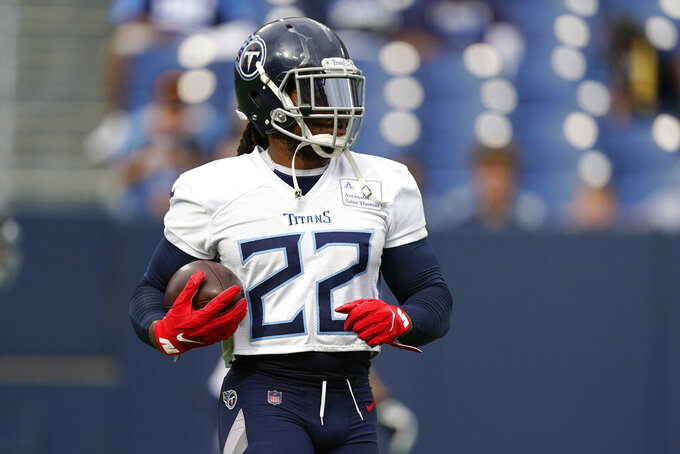 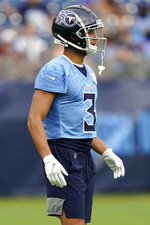 NASHVILLE, Tenn. (AP) — Ongoing construction at the Tennessee headquarters has prevented the Titans from having fans watch any of their practices so far during training camp.

Protocols for operating during the pandemic limited how close the Titans could get to fans Monday at Nissan Stadium in the one open practice of camp. So the Titans improvised.

They autographed mini-footballs, loaded them into plastic bins and had everyone take a few to toss into the stands to fans. Ryan Tannehill chucked several to the 6,925 fans on hand, left guard Rodger Saffold threw a few and then ran up to hand one to a young fan at the rail.

Improvisation has been a must for Tennessee working throughout a year where construction workers remain busy finishing renovations inside the team's main headquarters along with work inside the expansion nearly doubling the size of the facility.

Titans coach Mike Vrabel took the microphone at the end of practice to talk to fans, then followed up to reporters explaining the challenges of signing autographs.

“I just wanted to thank the fans and then also just let them know that we weren’t denying them opportunities to get autographs," Vrabel said. "It’s just that we weren’t allowed.”

Actually getting in front of fans at a stadium being shared with MLS' Nashville SC, concerts and a recent grand prix race right outside also has been an issue. Vrabel said that took some planning for what wound up being a great night, especially with the footballs.

“It seemed like it was a big hit, and they enjoyed it," Vrabel said. "So we realized how important our fans are. We want to continue to grow that and make them proud of what we do.”

The Titans didn't have fans for their home opener in 2020 because of the pandemic and never had more than 21% of capacity as they won the AFC South for the first time since 2008. They obviously are hoping to be able to fill up the building this season as they try to defend that title.

Outside linebacker Bud Dupree, the Titans’ biggest free agent signee of the offseason, enjoyed his first time in front of his new fans.

“I could tell everybody was excited to be in front of the fans, just be out here in the atmosphere, be in the stadium,” Dupree said. "Every time you’re in the stadium it feels like kind of game day simulation. So that's always a great opportunity to feel that vibe, feel the energy so you know what to expect.”

The Titans worked for about 90 minutes in a session with perhaps the biggest roar came when seven-time Pro Bowl wide receiver Julio Jones walked onto the field about an hour into the session.

The biggest play was a 50-yard-plus pass from Tannehill to Josh Reynolds, a free agent signee in March who said he's been dealing with an Achilles that has slowed him in camp. Tannehill also was picked off during the first team drill with safety Kevin Byard intercepting a pass to tight end Anthony Firkser.

Kicker Tucker McCann missed a second straight practice since getting his right, kicking ankle rolled up after making a field goal in the preseason opener. Vrabel said McCann is working hard to return. All Titans are going to Tampa Bay for joint practices Wednesday and Thursday with the Bucs before Saturday's preseason game.

Sam Ficken took advantage of the extra work. He made eight of nine field goals in one stretch, making a long of 53 and missing from 48.