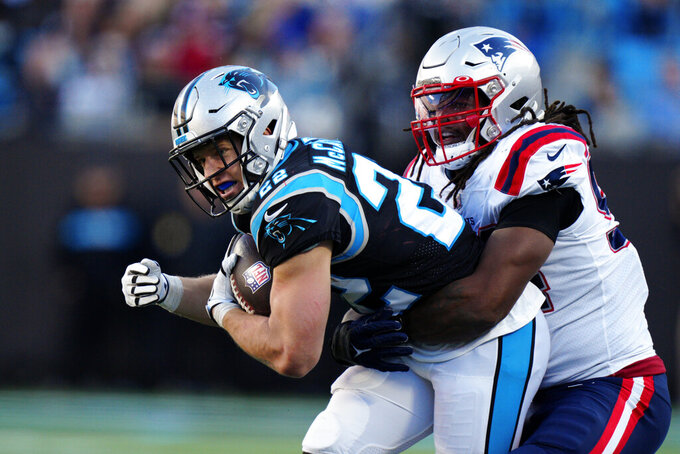 Carolina Panthers running back Christian McCaffrey is tackled by New England Patriots outside linebacker Dont'a Hightower during the second half of an NFL football game Sunday, Nov. 7, 2021, in Charlotte, N.C. (AP Photo/Jacob Kupferman)

CHARLOTTE, N.C. (AP) — The Carolina Panthers traded away three draft picks for Sam Darnold with the idea they could resurrect his career and he could develop into the franchise’s long-term answer at quarterback.

Now, it will be a surprise if Darnold can keep his starting job through the remainder of the season.

Darnold’s struggles continued Sunday as the fourth-year quarterback turned in another turnover-plagued outing, throwing three interceptions including a pick-six in a 24-6 loss to the New England Patriots. Darnold has thrown 10 interceptions in Carolina’s last six games, five of which have been losses.

Darnold is 17-30 as an NFL starter with 52 career touchdown passes and 50 interceptions.

The Panthers have scored one touchdown in the last three games, leaving coach Matt Rhule uncertain who'll be the team's quarterback next Sunday when the Panthers (4-5) visit the Arizona Cardinals.

“I will watch the tape before I make some big statements,” Rhule said of Darnold's status. "To be honest, I want to make sure I see everything and consider all factors. ... But we can’t have a quarterback throwing the ball up in the air. He knows that. I know that. So is it coaching, is it him? We can’t keep doing that. I can probably better answer that tomorrow.”

P.J. Walker is the only other quarterback on Carolina's roster, but he has thrown one touchdown and five interceptions in his NFL career.

Rhule benched Darnold two weeks ago in the second half of Carolina's 25-3 loss to the New York Giants, but this week said he wanted Darnold to “play through it.”

In fact, he got worse and seemingly less confident as the game went along.

After suffering a concussion last week against the Atlanta Falcons and seeing limited reps in practice, Darnold threw interceptions on three consecutive second-half possessions, allowing an ugly, albeit close game to get out of hand.

Two of the interceptions were clearly on Darnold — an overthrow of tight end Ian Thomas that was returned 88 yards for a touchdown by J.C. Jackson, and another jump ball pass in the end zone that Jackson outleaped D.J. Moore to intercept. The other was a great play by linebacker Jamie Collins, who leaped to intercept a ball at the line of scrimmage.

“It’s learning from it, continuing to take care of the football,” Darnold said. “It’s really that simple. I think for me it's understanding like if it's not there, throw it away, and then if I am outside of the pocket just making smart decisions.”

After Darnold's third interception, emotions began to boil over on the Carolina sideline.

Wide receiver Robby Anderson threw his helmet toward the bench and walked by Darnold twice, shouting something in the QB's direction. Darnold mostly ignored the flamboyant wide receiver, calmly putting on his baseball cap.

“I don't know exactly what I said to him, but it was pretty much like ‘you need to tighten up a little bit,’” Anderson said. “The same way if I'm slacking, I need someone to tell me that. We hold each other accountable and I hold myself accountable. That's part of it. That's part of somebody being your brother, telling them what they don't want to hear sometimes when you've got to hear it.”

The hope for the Panthers was that the return of 2019 All-Pro Christian McCaffrey might rejuvenate the offense and help get Darnold back on track. McCaffrey had more than 100 yards from scrimmage, but he couldn't help the Panthers get into the end zone.

Rhule's biggest frustrations with Darnold continue to revolve around his decision making, which has rapidly deteriorated since the team's 3-0 start.

When asked if the Panthers can win with Darnold over the long term, Rhule responded, “It’s a fair question. I don’t want to answer those questions in my brain right now coming off the game. Obviously we are all disappointed and I’m disappointed.”