Denver rookie Ojemudia makes most of 2nd chance in secondary 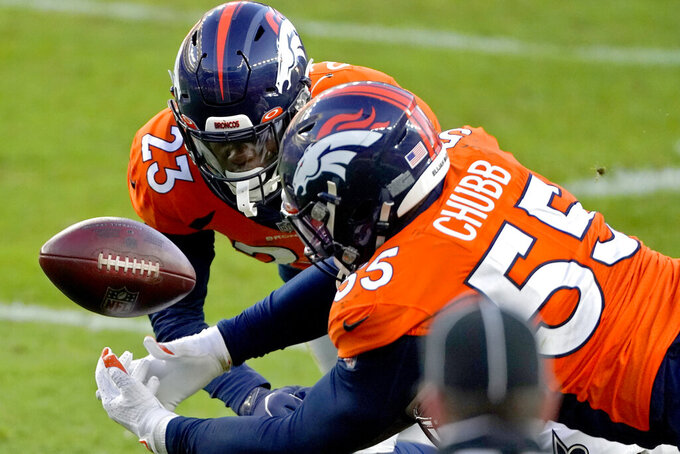 Denver Broncos outside linebacker Bradley Chubb (55) and cornerback Michael Ojemudia (23) can't hold on to an incomplete pass against the New Orleans Saints during the second half of an NFL football game, Sunday, Nov. 29, 2020, in Denver. (AP Photo/Jack Dempsey)

DENVER (AP) — Michael Ojemudia was summoned to the place no rookie wants to go — his head coach’s office.

A hard-to-hear conversation ensued as the Denver Broncos cornerback was demoted earlier this season.

Friendly words of advice from Vic Fangio followed — work on his technique and stay ready, because anything can happen.

Ojemudia took the words to heart and now is getting a second chance in a depleted secondary. The third-round pick out of Iowa has 12 tackles and a pass defensed over the last two games.

“It was a tough conversation,” said Ojemudia, who still played a role on special teams as he worked his way back into the cornerback rotation. “As a competitor you never want to sit and watch. During the week, my mindset never really changed. I always kept working. ... It definitely sucked, but it’s just part of the growth process.”

Ojemudia (pronounced oh-jay-MOO-dee-uh) has shown flashes of his skills this season, such as two forced fumbles and seven tackles in a win at New England on Oct 18. But he's also been inconsistent at times, which led to him being called into Fangio's office.

Ojemudia studied how the veterans handled their business at practice. Same for when he was on the sidelines after not starting at Las Vegas or against Miami. He began to see more time in the defensive back rotation against New Orleans.

“Even if you’re not in the game, you’re still in it like you’re playing,” said Ojemudia, whose team hosts Buffalo (10-3) on Saturday. “So, just watching those guys and taking tactics from them and just implementing it in my game is why I think I played a little better when I got back in the lineup.”

He has started the past two weeks in Denver's thinning secondary. The Broncos (5-8) are without Bryce Callahan (foot), Essang Bassey (knee) and A.J. Bouye (suspension). On Sunday at Carolina, they lost Kevin Toliver II and Duke Dawson Jr. to knee injuries.

Fangio can’t recall a injury-marred season in a secondary quite like this.

One of the things they wanted Ojemudia to work on was his technique.

So that was priority No. 1.

“It was just doing the simple things right,” he said. “Doing the things that you got drafted for, doing the things you did good in college. Just getting back to playing your game, not overthinking. Just being good at the basics and the fundamentals.”

Ojemudia and the rest of the secondary have a tough assignment Saturday against quarterback Josh Allen and the Bills.

“He has a rocket of an arm,” Ojemudia said of Allen. “You’re definitely going to have to be tight on your man, deep or short. I think protecting that bomb is going to be a focus of this week.”

Same with this — preparing for Bills receiver Stefon Diggs, who’s famous for his hitch routes that can chew up a cornerback young or old.

“It’s going to be tough,” said Ojemudia, who had three interceptions, nine passes defensed and one forced fumble his senior season at Iowa. “He’s definitely mastered that route and has a double move off of it. Just watching film, picking up little things and just studying him all week is how you can get an edge during the game.”

His view of the final three games? A chance to make another impression.

“Our backs against the walls — nobody left,” he said of the depleted secondary. “Just showing what you’re made of last couple of weeks is definitely going to be good going into the next season.”

NOTES: Tight end Nick Vannett had his first TD grab Sunday since 2018 when he was with Seattle. He was filling in for Noah Fant, who left the game with an illness. “It’s always nice when you get rewarded with a couple catches, especially with all the dirty work that I do,” Vannett said. ... RB Melvin Gordon (shoulder), LT Garett Bolles (illness) and Fant (illness) didn't practice Tuesday. WR Jerry Jeudy (ankle), RB Phillip Lindsay (hip), OG Graham Glasgow (foot), DL Shelby Harris (elbow) and OLB Bradley Chubb (neck) were all limited.