Devin Smith has injury-marred career back on track in Dallas 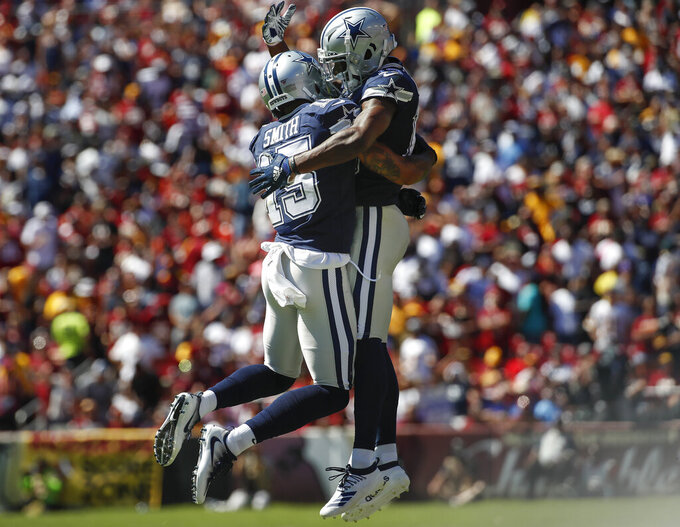 FRISCO, Texas (AP) — Devin Smith glances to his left and right in the Dallas Cowboys locker room while trying to explain how difficult it was to be out of the NFL for a year following two major knee injuries that derailed his career.

The fifth-year receiver's stall isn't far from those of star running back Ezekiel Elliott and receiver Noah Brown, a pair of Ohio State teammates when the Buckeyes won a national championship during the 2014 season.

By nodding in the direction of the lockers for Elliott and Brown, Smith is pointing out that they were helping the Cowboys make the playoffs last season, while he was trying to find a team after the New York Jets gave up on their 2015 second-round draft pick.

"All my former teammates, all my friends that I have in this league, watching them still play and have fun," Smith said. "It was tough for me because I'm sitting at home on the couch, watching them. That's definitely a place that you don't want to be when you're in this league."

Smith finally joined the fun, running under a deep throw from Dak Prescott on a 51-yard touchdown that sparked a second straight strong performance from the Dallas offense in last week's 31-21 win over Washington.

Now Smith wants to do it again for the Cowboys (2-0), three-touchdown favorites at home against Miami (0-2) on Sunday. Not only did the long TD do wonders for his comeback, Smith's role might increase with a knee injury that could sideline leading receiver Michael Gallup for a month.

"Everything that I've been doing has helped me get to this point," said Smith, who had 74 yards receiving against the Redskins after entering the game with 135 career yards and one TD from 14 games over his first two seasons in 2015-16. He hadn't played in two years.

"So I don't really want to change anything. I don't want to overhype myself or overthink anything. I just want to stay even keel and just go out here, just work hard every single day and try to have a great performance on Sunday."

After a half-dozen or so teams passed on Smith as he looked for a job in 2018, the Cowboys signed him as soon as the season was over. He quietly went through offseason workouts — so quietly, even some of the players in the receivers room with him didn't know the whole back story.

"I knew he had some injuries, but I didn't know the severity of them," said Randall Cobb, who joined the Cowboys as a free agent. "You look back, it makes you think about him during OTAs and training camp. You saw his confidence continue to grow and to build."

Everyone else noticed in preseason games, when Smith stood out enough to make the roster. He went without a catch in the opener, then punctuated his comeback by displaying the breakaway speed that was his most notable attribute during a 12-TD senior season at Ohio State.

"It means a lot," said Elliott, one of the stars who overshadowed Smith during Ohio State's title run five years ago. "Just a guy who has battled the way he has in his NFL career and just to see four or five years later, things are coming together. I'm happy for him."

Smith's son, Devin Smith Jr., saw his dad's preseason TD catch in Hawaii on television, so the youngster would ask every day when Smith got home if he scored a touchdown that day. The kid finally got the answer he wanted.

"It's an inspiration," Prescott said. "Injuries can hurt careers and sometimes people can never bounce back. But in this case, you found a guy that does great in offseason, training camp and preseason. He really got his confidence back and forgot about those injuries and forgot about all those things and reasons that said maybe he couldn't do it."

The addition of Cobb and emergence of Gallup, both behind No. 1 receiver Amari Cooper, left Smith battling for one of the final roster spots. He left little doubt he deserved it, and now has everybody wondering what could be while Gallup is out.

Nestled between his former Ohio State teammates in the Cowboys locker room, Smith can say he is back.