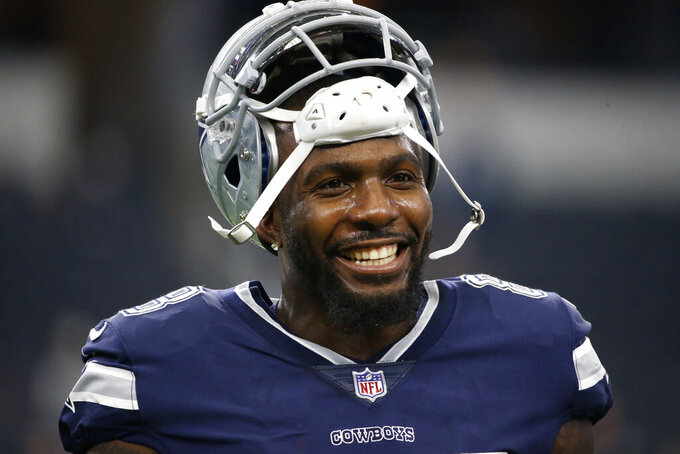 FILE - In this Nov. 23, 2017, file photo, Dallas Cowboys' Dez Bryant warms up before an NFL football game against the Los Angeles Chargers in Arlington, Texas. Former Cowboys receiver Dez Bryant is one step closer to playing in the NFL again. The 31-year-old Bryant signed with the Baltimore Ravens on Tuesday, Oct. 27, 2020 and has been assigned to the practice squad. (AP Photo/Ron Jenkins, File)

Former Cowboys receiver Dez Bryant has moved one step closer to playing in the NFL again.

The 31-year-old Bryant signed with the Baltimore Ravens on Tuesday and has been assigned to the practice squad.

Bryant last played in 2017, when he had 69 catches for 838 yards in his eighth and final season in Dallas. He signed with New Orleans in November 2018, but tore his Achilles tendon before getting into a game.

Now he’s on the cusp of getting back on the field.

If he's retained his speed and is not too rusty, Bryant could add a much-needed deep threat to a Baltimore passing attack that currently ranks 31st in yards per game. Second-year receiver Marquis Brown is currently quarterback Lamar Jackson’s most prominent target for the long ball.

After scoring a career-high 16 TDs in 2014, Bryant endured two straight injury-shortened seasons before playing in 16 games in 2017.

He put up some impressive numbers with Dallas, but was sometimes perceived as a distraction because of his outbursts on the sideline during games and in the locker room. He was released by the Cowboys in April 2018.

Ravens tight end Mark Andrews was asked Monday what the addition of Bryant could mean for the team. His reply: “That would be cool. He’s been around the league for a long, long time. I’m excited to meet him, get around him hopefully. Just learn everything you can from a guy like that because they’ve done it and they’ve been there. It’s super exciting for me.