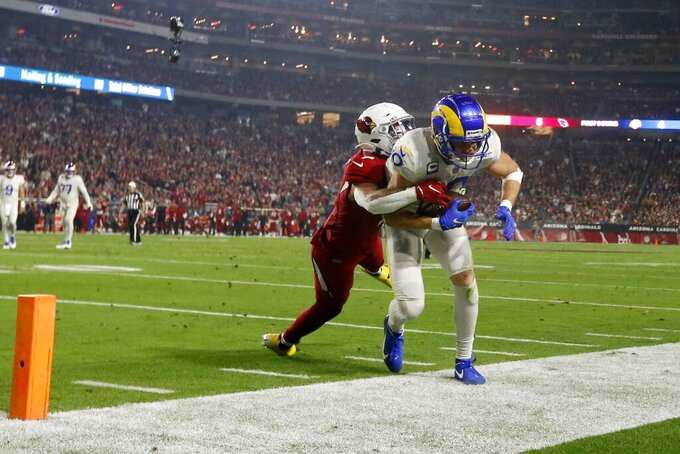 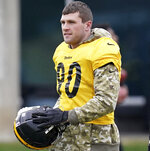 Division rivalries add extra spice to NFL matchups. There are a bunch of them in Week 15 as teams hit the stretch run.

OK, maybe no one is paying attention to the AFC South meeting between Houston and Jacksonville. Balance that with these: Saints at Buccaneers, Cowboys at Giants, Washington at Eagles, Jets at Dolphins, and Vikings at Bears. All with some playoff implications.

Not to forget other significant games in a week severely impacted by COVID-19. That includes Las Vegas at Cleveland, moved from Saturday to Monday; Seattle at the Los Angeles Rams, and Washington at Philadelphia, both switched from Sunday to Tuesday.

“Guys know, but at the same time we try every week to make it about the week, not make it bigger than it needs to be,” Colts quarterback Carson Wentz says of facing New England in one of those big games. “We know the magnitude of the game, the magnitude of who we are playing in the conference and where teams sit. We know all that stuff."

The action began Thursday night with Kansas City's 34-28 overtime win over the Los Angeles Chargers. Travis Kelce caught a short pass from Patrick Mahomes and made several defenders miss for a 34-yard, game-ending touchdown as the Chiefs (10-4) won their seventh straight and took command of the AFC West. Kelce caught 10 passes for a career-high 191 yards and two touchdowns, and Mahomes threw for 410 yards and three scores. The Chargers (8-6) failed to convert three fourth downs while in field-goal range and also lost a fumble at the Kansas City 2, ending a 97-yard drive with no points.

On Saturday, Indianapolis beat New England 27-17 when Jonathan Taylor ran for 170 yards and scored on a 67-yarder with 2:01 left. The Colts (8-6) solidified their playoff hopes by winning for the fifth time in six games — and ending an eight-game losing streak to the rival Patriots (9-5). Taylor has run for a touchdown in 11 straight games to tie Hall of Famer Lenny Moore for the longest streak in franchise history. New England had won seven straight and started the weekend in the top spot of the AFC playoff chase. But the Patriots could not overcome a 20-0 deficit because of too many uncharacteristic mistakes, including Taylor’s game-saving run.

What a mess. No, not just the plummeting Raiders. Cleveland is in the midst of a major COVID-19 outbreak that could see quarterbacks Baker Mayfield and Case Keenum sidelined, putting Nick Mullens in the lineup. Browns coach Kevin Stefanski also is in the protocol; he missed a playoff win at Pittsburgh in January for the same reason.

The Raiders have won three straight in this series, but have dropped five of six games since starting the season 5-2. They come off their second-most lopsided regular-season loss in the Super Bowl era, 48-9 to Kansas City and have been held to 16 points or fewer in all seven losses.

The Ravens have been ravaged by injuries from the preseason on, and might be in their worst shape yet. Quarterback Lamar Jackson was sidelined in a loss to Cleveland by a sprained ankle, and the secondary is down to third-stringers. Not the best way to face Aaron Rodgers, who is having another superb season, and the balanced Green Bay attack.

But history is on Baltimore's side. It has won 13 straight games against the NFC, the longest active streak by a team against the opposing conference. Slowing wideout Davante Adams will be the biggest challenge, and the Packers take the NFC North by winning.

One of the NFC's top teams against the league's tail-ender. Seems like a rout, especially with Arizona being 7-0 on the road and in position to clinch a playoff spot.

If the Cardinals win, they will be the 10th team with eight road victories in a season; they play at Dallas on Jan. 2 and could be the NFL’s first team with a 9-0 road record in a season. The league is playing a 17-game schedule for the first time.

Despite their inconsistencies in all aspects, the Steelers remain viable for the playoffs. A win over the Titans, who have a two-game edge in the AFC South, would be massive. The Steelers are optimistic star linebacker T.J. Watt (groin) and DB Joe Haden (foot) will be able to play. Watt, the NFL’s sacks leader with 16, is the key: Pittsburgh is 6-2 when he plays a full game and 0-4-1 in games when he sits or is limited because of injury.

Tennessee can win its second straight division title with a win and an Indianapolis loss to New England.

A pair of streaky teams pursuing AFC playoff spots, with the Bengals in contention for the title of the jumbled North. But they have lost two straight and the Broncos have dominated the series, especially in Denver, where they’re won 13 of 16.

“I think everybody is still optimistic. They all know we have a good team,” coach Zac Taylor says. “We have to find ways to handle our business and get some wins here. But it’s not doom or gloom.”

Lots of playmakers to keep an eye on, from Cincinnati receivers rookie Ja'Marr Chase and the emerging Tee Higgins (three 100-yard games in a row) to Denver's running backs, Melvin Gordon and rookie Javonte Williams.

Yet another game involving two contenders. The Niners have won four of five. Atlanta is 5-2 on the road and seeks its first season with six road wins since 2016, when it went to the Super Bowl.

This one could be decided in the red zone. San Francisco has scored an NFL-best 5.7 points per trip inside the 20 with touchdowns on a league-leading 73% of those drives. Atlanta has struggled to stop teams near the end zone, ranking 29th in points allowed per red-zone drive (5.58) and 28th in TDs allowed (68.8%).

Each team is reeling, though the Bills still control their chances of being in the Super Bowl mix they once were favored for. The Bills have dropped three of four and five of eight. They have not lost three straight since a four-game skid in 2018 when quarterback Josh Allen was sidelined with a sprained right elbow. Now he has a left foot issue.

Bills coach Sean McDermott faces his former team for the second time; he was the Panthers defensive coordinator from 2011-2016. Carolina has lost eight of its past 10 and QB Cam Newton has lost 11 straight starts for Carolina going back to the 2018 season.

Winners of five straight to climb back into the playoff chase, the Dolphins have won seven of the past eight games in the series, including the past three by a combined 68-20. But the Jets, losers in their past five visits, actually are 4-0 in their past four December trips to Miami. New York will clinch last place in the AFC East by losing; that's a spot it has owned four of the past five seasons.

Jets rookie quarterback Zach Wilson needs to watch for a fellow rookie, linebacker Jaelan Phillips. He has five sacks in his past two games and seven sacks during the victory string.

With 9-8 seemingly a wild-card qualifying record, the winner at the Linc could be in good shape. Not that either team is in the best of shape at quarterback, with Philly's Jalen Hurts and Washington's Taylor Heinicke battling injuries.

Washington, in the midst of a COVID-19 outbreak, plays the second of five consecutive divisional games to end the regular season. The previous time that occurred was 1995 for Tampa Bay.

Dallas is in a strong position to secure a playoff berth and, soon, the NFC East title. Don't look for the undermanned Giants to stand in the Cowboys' way. Dallas is 3-0 against the NFC East and has a three-game division lead with four games remaining. No other NFL team is unbeaten in its division.

The Cowboys likely will return to the run game; they rushed for 201 yards on 39 attempts in an early season victory over New York. Meanwhile, the Cowboys have tied a club record with five defensive touchdowns, and Trevon Diggs is the NFL leader in interceptions with nine.

A victory and some losses elsewhere would get the Rams into the postseason parade. For now, they must concentrate on an opponent that has won its past two and must win out for any shot at a playoff berth. Seattle could be hampered, too, with top wideout Tyler Lockett in COVID-19 protocol, though it is the Rams who have had the coronavirus outbreak.

“According to the outside, we were out of it two weeks ago, and it doesn’t matter what we’ve done the last two weeks,” Seahawks safety Quandre Diggs says. “We’re still 5-8. ... We’re comfortable with the uncomfortable. Right now we’re in an uncomfortable situation, so we’ve got to make it do.”

Seahawks linebacker Bobby Wagner leads the league with 152 tackles. He figures to be busy trying to bring down Cooper Kupp. The receiver topped 100 yards for the eighth time this season in a win over NFC West leader Arizona, making a career-high 13 catches for 123 yards and a touchdown. He had seven grabs for 92 yards in the first game against Seattle back in October, his second-best total in nine career meetings.

A coronation for TB (the Bucs) and TB (Tom Brady) could be coming Sunday. The Bucs are 6-0 at home and own the division by beating the Saints.

Still, Brady’s 0-3 in the regular season against the Saints — he and Tampa beat them in the playoffs on the way to the league title — and New Orleans has won the past six regular-season meetings.

How good has Brady been in 2021? At 44, he leads the NFL with 378 completions, 554 attempts, 4,134 yards and 36 touchdowns. The seven-time Super Bowl champion has never topped the league in all four categories in the same season.

The Bears, who have won five of the past six meetings, could be without all three coordinators because of COVID-19 protocols.

This one might be decided in the trenches. Minnesota leads the league with 41 sacks even though no player has more than six. The Vikings could be facing a depleted line, with both of Chicago’s starting tackles, Jason Peters (ankle) and Larry Borom (COVID-19 list) possibly unavailable.

If it's close, Chicago has a good shot: Minnesota is the only team in the league without a loss by more than eight points.

Do we really need to say anything about this game?

Well, now that Urban Meyer has seen his NFL coaching career short-circuited at 13 games, maybe so.