Dolphins say they were doing 'due diligence' on Watson 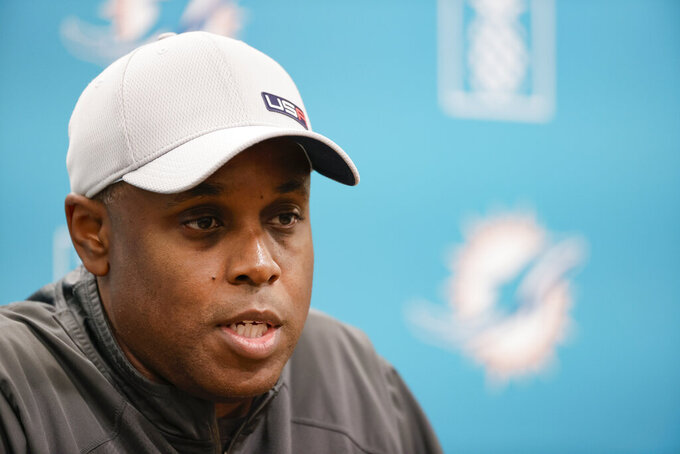 Miami Dolphins General Manager Chris Grier talks to the media before practice at Baptist Health Training Complex in Hard Rock Stadium on Wednesday, November 3, 2021 in Miami Gardens, Florida, in preparation for their game against the Houston Texans at Hard Rock Stadium on Sunday.(David Santiago/Miami Herald via AP)

MIAMI GARDENS, Fla. (AP) — Miami considered making a trade with Houston for Deshaun Watson but did not ask his accusers to sign nondisclosure agreements in the hopes of resolving the sexual assault and misconduct cases against the embattled quarterback, Dolphins general manager Chris Grier said Wednesday.

Grier spoke one day after the NFL's deadline passed for a trade to be made this season and, without ever saying Watson’s name — mindful of tampering rules — said the Dolphins were merely doing their due diligence when considering whether to make a deal.

That process, Grier said, did not include reaching out to the accusers or their attorney.

“Any suggestion that this organization would be dealing behind the scenes and trying to influence decisions is absolutely ridiculous and categorically false,” Grier said. “So, to say that we would be involved in that is just flat wrong.”

Watson has not been charged with a crime and has denied all wrongdoing. His request for a trade out of Houston became known around the end of last season, or about two months before the accusers began coming forward with their allegations of his misconduct.

Assuming the cases go forward, Watson is scheduled to be deposed Feb. 22, or about three weeks before the new NFL league year starts — which is the next opportunity for him to be officially traded, though a deal can be agreed to in principle before then.

“I guess, now that the heat is off, I probably won’t be getting calls from the other side wanting to settle the case,” attorney Tony Buzbee, who represents Watson’s accusers, told Houston television station Fox 26 KRIV after the trade deadline passed Tuesday. “Obviously there was some effort, pretty tough effort, to try to settle the case and it didn’t happen.”

Texans general manager Nick Caserio said Wednesday that he couldn't say how much Watson's unresolved legal issues played a role in no trade being made, if at all.

“I don’t really want to comment on something that’s sort of out of my control," Caserio said. “We just take it one step at a time and you take the information as it comes and try to make good decisions, the best we can, and in the end there wasn’t a trade that came to fruition. And that happens all the time."

Buzbee told KRIV that he never spoke with the Dolphins directly about settling cases, talking instead with lawyers “who were acting as mediators” and Watson’s attorney, Rusty Hardin.

A major issue for Buzbee’s clients, he said, was an insistence that they sign non-disclosure agreements as part of settlements.

“That was a deal-breaker,” Buzbee said.

Grier said the Dolphins never felt compelled to discuss the notion of acquiring Watson with female team employees since, he said, no deal was ever close. Grier said it was Miami's decision to stop its pursuit of a trade — for now, anyway — but did not offer specific reasons why.

“It never got to a point where anything was that close to happening,” Grier said. “Of course, if that was happening we definitely would have thought about that and done something.”

The Dolphins’ interest in Watson has not been a secret for months, which has raised a series of questions about whether the team believes Tua Tagovailoa — the No. 5 overall pick in the 2020 draft — is the long-term answer at quarterback.

Tagovailoa’s detractors can point to plenty of numbers. The longest completion of his NFL career is 40 yards; there are 64 other quarterbacks, including Dolphins backup Jacoby Brissett, who have had at least one throw go for longer since the start of last season.

And among the 32 quarterbacks with at least 10 starts since the beginning of 2020, Tagovailoa’s rating of 86.7 ranks 26th. That said, Dolphins coach Brian Flores has said repeatedly in recent weeks that Tagovailoa is Miami’s quarterback.

“He’s gotten better. He’s gotten a lot better and he’s had some good performances this season,” Flores said. “He just needs to take it one day at a time and continue to improve and get better. That’s where his focus should be, not on anything outside of that.”

Watson has a no-trade clause, though players can amend that to allow a move of their liking. The Texans have been paying Watson not to play, placing him on the inactive list each week. Caserio said the Texans and Watson “are moving forward," though it's not clear what exactly that will mean or if Watson will play at all in 2021.

Grier did not rule out the notion resuming the pursuit of Watson in the offseason.

By Pat Graham an hour ago
By Arnie Stapleton 5 hrs ago
By W.g. Ramirez 8 hrs ago
By Brett Martel 9 hrs ago
By Dan Greenspan 10 hrs ago