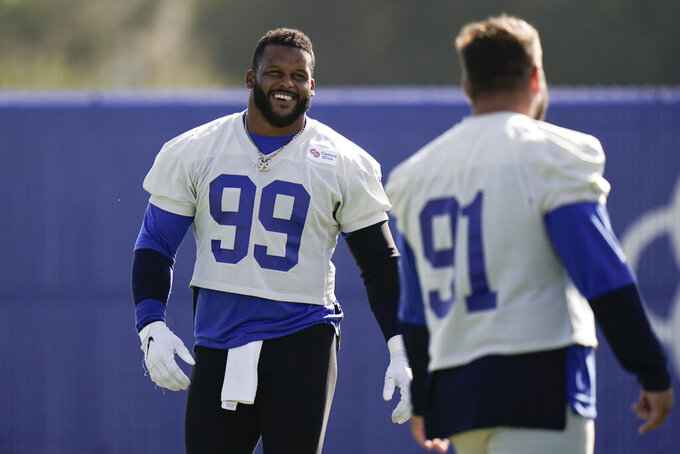 Whether it is the best of Donald’s seven seasons, the decorated defensive tackle is reserving judgment.

How the Rams (6-3) perform on Monday night against quarterback Tom Brady and a Tampa Bay Buccaneers offense averaging 29.1 points per game will go a long way toward that evaluation.

Only Buffalo and San Francisco have scored more than 20 points against the Rams defense. Miami finished with 28 points in Week 8 thanks to touchdowns on fumble and punt returns, wasting an outing where Los Angeles allowed 145 yards.

The ability to execute game after game is what stands out to Donald, who leads the team with nine sacks and three forced fumbles.

“It ain’t ‘one week do good, other week fall off.’ I think it’s been consistent these last few weeks from a dialed in standpoint,” Donald said. “And I think we got a lot of guys, you know, from up front to the middle to the guys in back that are playing like star players. At any time, anybody can make that big play.”

Coach Sean McVay likes how the defense has built on that success from week to week. McVay said his favorite part of how they played in the 23-16 win over Seattle was shaking off allowing a touchdown on the opening drive to force three takeaways.

“Consistency is the truest measure of performance,” McVay said. “I think that confidence and that momentum is a really powerful thing if you build on it the right way and that’s what our guys have done. I think they are getting more and more comfortable with the intent of what we’re trying to get done. They’re getting more comfortable playing with one another, working off one another, understanding team defense is about rushing, coverage, all 11 being on the same page.”

The defense will need to maintain that togetherness against the prolific Buccaneers (7-3). Outside of a Week 9 flop against New Orleans where it managed three points, Tampa Bay has lived up to its billing as an offensive juggernaut by scoring at least 31 points in five games, including a season-high 46 against Carolina on Sunday.

“They’re one of the best offenses for a reason, you see how explosive they are,” McVay said. “I think what says as much about them as anything is when you watch the response that they had from a disappointing outing against the Saints a couple of weeks ago. What they did against the Panthers was a very decisive, definitive victory.”

One area that has set the Rams apart has been limiting big plays, as they showed against the Seahawks. Russell Wilson was 3-of-10 passing on throws longer than 10 yards, according to Next Gen Stats. He was 0 for 6 on attempts of 20-plus yards with one of his two interceptions coming on a deep ball into the end zone.

Brady thrived on those plays against the Panthers, completing 7 of 12 passes longer than 10 yards for 140 yards and one touchdown. However, the Saints limited his effectiveness to 8-of-16 passing for 111 yards and intercepted him twice.

Duplicating New Orleans’ formula of creating pressure and forcing Brady to throw into tight windows is how the Rams defense can stay special for another week.

“He knows how to control the game so you got to be smart when you’re playing against a good quarterback like that,” Donald said. “Stick to the game plan and do what you need to do to try to find ways to affect him to the point where he can’t success.”