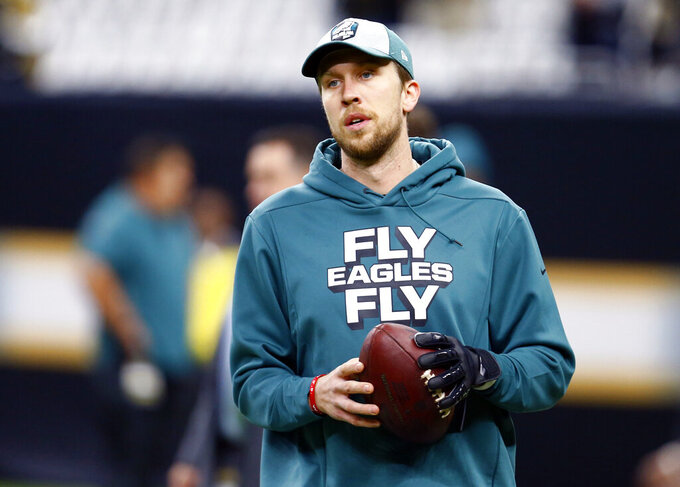 FILE - In this Jan. 13, 2019, file photo, Philadelphia Eagles quarterback Nick Foles warms up before an NFL divisional playoff football game against the New Orleans Saints in New Orleans. Eagles general manager Howie Roseman said Wednesday, Feb. 27,2 019, that the team will not use its franchise tag on Foles and instead will let him become a free agent. (AP Photo/Butch Dill, File)

INDIANAPOLIS (AP) — Nick Foles rejuvenated his career in Philadelphia. Now he wants to turn his success into an NFL starting job — and the Eagles intend to give him that chance.

General manager Howie Roseman told reporters Wednesday that the franchise will not use the franchise tag on Foles, making him a free agent.

"It's hard when you have someone who is incredibly valuable to your organization, the most important position in sports," Roseman said during the NFL's annual scouting combine in Indianapolis. "But at the same time, he deserves an opportunity to lead a team. It's a goal of his to lead another team and lead another locker room, and we feel at this point it's the right decision.""

Roseman said the Eagles agreed to make the move after Foles expressed his desire during a recent meeting.

And with Carson Wentz, the No. 2 overall draft pick in 2016 the established starter in Philadelphia, Foles understood it meant he would have to find a new team.

Over the last two seasons, Foles became one of the most precious commodities in sports — a backup quarterback with championship-caliber talent.

When Wentz tore the anterior cruciate ligament in his left knee in December 2017, Foles stepped in, led the Eagles to their first NFL title since 1960 and was the Super Bowl MVP.

Last season, when Wentz suffered a back injury, Foles again stepped forward and led the Eagles back to the playoffs. Foles helped Philadelphia to a 16-15 wild-card victory at Chicago before losing 20-14 at New Orleans in the divisional round.

But in those two seasons he won four playoff games — more than he did in his previous five in the league combined — and turned himself into a hot commodity at the most prized position in the league.

"We've been so fortunate over the last couple of years to have two top-15 quarterbacks in Carson and Nick, and we spent a lot of time discussing this internally and with him," Roseman said. "We feel very comfortable about it. Again, hard decision because of someone who means a lot to us, professionally and personally, but at that end of the day as an organization, we felt it was the right thing to do."

When Foles signs elsewhere, Nate Sudfeld will move into the No. 2 spot.

The 30-year-old Foles comes with a solid resume.

He was Philadelphia's third-round pick in 2012, starting six games as a rookie and 18 more before signing with the Rams in 2015. After one season as the starter in St. Louis, he moved to Kansas City, where he rejoined former Eagles coach Andy Reid to serve as the backup to Alex Smith. In 2016, Foles returned to Philadelphia to mentor Wentz and wound up becoming a fan favorite and a Super Bowl champ.

And he hits free agency with a chance to cash in.

"Nick and I have a lot of history together, all the way back to when we drafted him and I was on coach Reid's staff here in Philly," Eagles coach Doug Pederson said. "We had conversations, obviously, at the end of the season and he knew where I stood and how I felt about him, but at the same time, he was a huge part of our success the last two years. It's an opportunity now, as Howie mentioned, to be a starter in this league. And he's very capable of doing that."