Eagles can clinch playoff spot by beating WFT, getting help 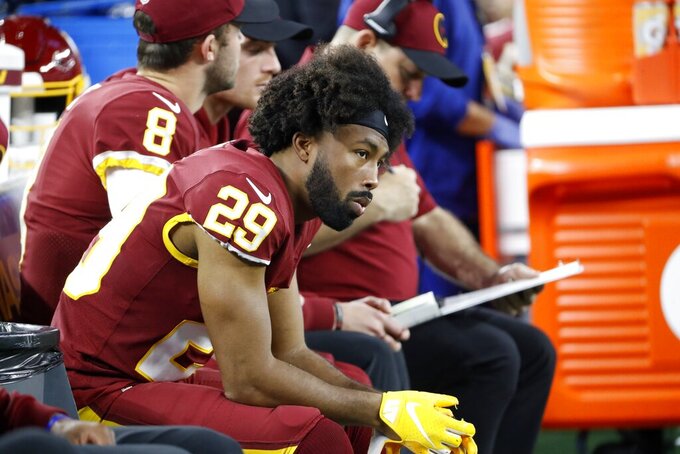 Washington Football Team cornerback Kendall Fuller (29) sits on the bench late in the second half of an NFL football game against the Dallas Cowboys in Arlington, Texas, Sunday, Dec. 26, 2021. (AP Photo/Roger Steinman)

One on Sunday at Washington and some help around the NFL would get Philadelphia into the playoffs.

The Eagles can clinch an NFC wild-card spot by beating the division rival for a second time in less than two weeks, if Minnesota loses Sunday night to Green Bay and either New Orleans loses to Carolina or San Francisco beats Houston. There are other scenarios, too, but the path to the postseason starts with a much-needed victory against banged-up Washington.

“We just played them, and it’s very short notice,” Hurts said. “It’s kind of how it is in the NFL. We’ll go in there as prepared as we can be to go play them and put our best foot forward.”

Hurts has not looked too bothered by the ankle injury that caused him to miss Philadelphia’s game Dec. 5 at the New York Jets. The second-year quarterback has rushed for 45 yards and two touchdowns and completed 37 of 54 passes for 495 yards and three touchdowns.

The Eagles have won three in a row to improve to 8-7 and put themselves on the verge of making the playoffs for the first time since the 2019 season. Still, Hurts does not believe they’ve played their best game yet — and he and first-year coach Nick Sirianni are on the same page about that.

“We know we can get better,” Sirianni said. “There is always something. You never play a flawless game — ever. You’re always striving to be better.”

Following a similar recipe to their game Dec. 21 against Washington would be a good start. The Eagles rushed for 238 yards to come back from a 10-point deficit and won 27-17.

Top running back Miles Sanders is out after breaking his left hand in a blowout victory against the Giants in Week 16, and Jordan Howard’s status is also uncertain. But the success on the ground in the earlier matchup was as much about the Eagles’ offensive line and holes in Washington’s defense as much as anything else.

Washington (6-9) is limping to the finish line after three consecutive defeats. Philadelphia is a 3½-point favorite according to FanDuel Sportsbook, with oddsmakers clearly believing the Eagles can be better.

With Sanders and perhaps Howard sidelined, the Eagles will likely rely on Boston Scott and rookie Kenneth Gainwell to lead the league’s No. 1 rushing offense. When Sanders missed three games earlier in the season, Philadelphia didn’t miss a beat. The Eagles had 628 yards rushing, including 181 from Scott in those games.

Scott has 326 yards rushing, five TDs and an average of 4.5 yards a carry in his fourth season in Philadelphia.

"Every time he’s called upon, he has come through,” Sirianni said. “We have no doubt that he’ll be able to do the same thing this week when called upon. So, it’s great to be able to have that type of depth. I think when you really look at it, we got a good group of backs. We got four backs that I think a lot of teams would like to have.”

Washington coach Ron Rivera is sticking with Taylor Heinicke at quarterback after a two-interception game at Dallas, but he left open the possibility of playing backup Kyle Allen a bit against Philadelphia and then in the regular-season finale at the New York Giants.

Heinicke’s ride from out of football to quarantine quarterback, playoff starter and now Washington’s offensive leader may be coming to an end. But he’s not stressing looking over his shoulder.

“I come in every day and I just try and get better and do my job the best I can,” Heinicke said. “If I feel like I do that, everything else takes care of itself. And if he feels like Kyle’s a better option at that point then, yeah, that’s what it is. But, I try to control what I can control and that’s just coming in, working hard and going out there and trying to win games.”

“This is the first year in what we’re doing. We got some guys doing some new things. It’s a brand new coaching staff,” defensive coordinator Jonathan Gannon said. “As you go along the season you figure out certain ways how you want to play and who you’re defending and what’s working and what’s not. I really think it’s a credit to the position coaches and the players that we’ve kept improving just a little bit each week.”