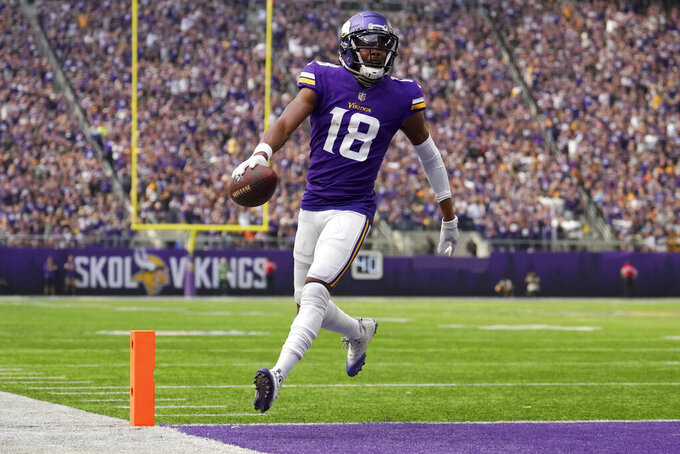 Minnesota Vikings wide receiver Justin Jefferson runs the ball in for a touchdown off a pass from quarterback Kirk Cousins in the first quarter of an NFL season opener game against the Green Bay Packers, Sunday, Sept. 11, 2022, in Minneapolis. (Anthony Souffle/Star Tribune via AP)

OPENING LINE: Eagles by 1 1/2, according to FanDuel SportsBook.

AGAINST THE SPREAD: Philadelphia 0-1; Minnesota 1-0.

TURNOVER DIFFERENTIAL: Eagles plus-1; Vikings plus-2.

EAGLES PLAYER TO WATCH: WR A.J. Brown caught 10 passes for 155 yards, tying his career high, in his Eagles debut on Sunday and quickly has become QB Jalen Hurts’ go-to option on the outside. Brown and Hurts have been friends ever since Hurts hosted Brown on a recruiting visit while at Alabama and their friendship likely only got tighter when Hurts targeted Brown 13 times in the opener. The Eagles traded the No. 18 overall pick and a third-rounder to the Tennessee Titans on draft day for Brown, who then signed a four-year deal with $57 million guaranteed. Brown, a 2020 Pro Bowl selection in his fourth season, picked up right where he left off against Detroit following an impressive training camp. Also keep an eye on WR Devonta Smith. The speedy second-year receiver set a club rookie record last season with 916 receiving yards, but went without a catch against the Lions while being targeted just four times. It’s likely that Hurts will look to get Smith more involved against Minnesota.

VIKINGS PLAYER TO WATCH: WR Justin Jefferson made nine catches for a career-high 184 yards and two TDs in Sunday’s win over Green Bay. The 2020 first-round pick (No. 22 overall) surpassed 200 career receptions in the opener in his 34th game, and only three NFL receivers ever have reached as many catches in fewer games. Also keep an eye on WR Jalen Reagor. Reagor went one pick ahead of Jefferson in the 2020 draft, but was traded to Minnesota last month after two disappointing seasons with the Eagles. He’ll return to Philadelphia as the Vikings’ primary punt returner. He made two fair catches and returned one punt for 7 yards against the Packers.

KEY MATCHUP: Minnesota’s defense vs. Hurts. The Eagles QB amassed 333 yards of offense against the Lions in a dazzling display of athletic play. Hurts threw for 243 yards and ran for 90 yards and a touchdown on 17 attempts — many of which came after scrambles out of the pocket. Hurts was sacked just once by Detroit and converted a game-clinching quarterback sneak on fourth-and-1 from the Lions 40 with 1:06 remaining. The second-round pick is in his third season and second year as the full-time starter. He has made 20 career starts. Last season, Hurts had a team-best 784 yards on the ground, including a team-high 10 rushing TDs, for an Eagles team that led the NFL in rushing yards (2,715) and rushing TDs (25). The Lions tried to bring pressure against Hurts, but he had an answer every time.

KEY INJURIES: Eagles DE Derek Barnett suffered a season-ending ACL tear in his knee in the third quarter of Sunday’s win over Detroit. Philadelphia signed edge rusher Janarius Robinson off the Vikings practice squad this week to help fill the void. ... Minnesota S Lewis Cine (knee contusion) returned to practice this week after sitting out the season-opening win over the Packers on Sunday. The Vikings picked Cine in the first round at No. 32 overall in the draft this past spring. Fellow rookie Andrew Booth Jr. (quad), a second-round pick, left after two snaps on special teams in Sunday’s game. Coach Kevin O’Connell was optimistic early in the week about the cornerback’s chances of playing against the Eagles.

SERIES NOTES: The Vikings have won the past two games in the series. The Eagles’ previous victory came in the NFC championship game on Jan. 21, 2018, in Philadelphia. Current Eagles defensive coordinator Jonathan Gannon was an assistant defensive backs coach for the Vikings and watched Philadelphia QB Nick Foles pass for 352 yards and 3 TDs. The Eagles would go on to win their only Super Bowl two weeks later over the Patriots.

STATS AND STUFF: The Eagles had four different players get rushing TDs in the opener. The previous time that happened for the club was 1961. ... Hurts leads all QBs in rushing yards (874) and rushing TDs (11) since he became a full-time starter in 2021. ... Philadelphia CB James Bradberry, who was signed as a free agent in the offseason, became the first Eagles player since 1940 to return an interception for a touchdown in his club debut. ... Eagles C Jason Kelce has started 123 straight games, the second-longest active streak in the NFL. ... Minnesota had four sacks, an interception and forced fumble against the Packers in its first game under new defensive coordinator Ed Donatell. ... Vikings K Greg Joseph tied a franchise record with a 56-yard field goal against Green Bay, upping his mark to eight made field goals of 50-plus yards since the start of last season. ... LB Jordan Hicks made 14 tackles against the Packers. ... Vikings eight-time Pro Bowl CB Patrick Peterson is in his 12th season.

FANTASY TIP: Vikings RB Dalvin Cook could have a big day against Philadelphia’s shaky run defense, which surrendered 181 yards and three TDs to the Lions. A three-time Pro Bowl selection, Cook got off to a strong start to the 2022 season with 90 yards on 20 carries while adding three catches for 18 yards.