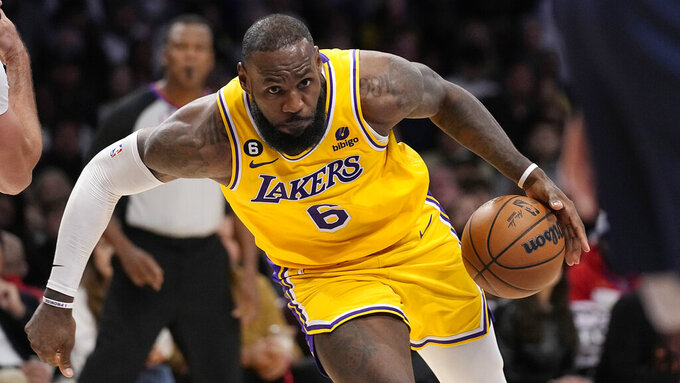 FILE - Los Angeles Lakers forward LeBron James to the basket during the second half of an NBA basketball game against the New Orleans Pelicans Wednesday, Nov. 2, 2022, in Los Angeles. So if Twitter is to be believed, LeBron James wants to leave the Lakers, Adam Schefter says Josh McDaniels is done as coach of the Raiders, and Connor McDavid has been traded from the Edmonton Oilers to the New York Islanders. Each of the tweets seen Wednesday, Nov. 9, 2022, about the above items normally would count as major news in the world of sports, but none was real. Instead, all came from fake accounts. (AP Photo/Mark J. Terrill, File)

So if Twitter is to be believed, LeBron James wants to leave the Los Angeles Lakers, Adam Schefter says Josh McDaniels is done as coach of the Las Vegas Raiders, Aroldis Chapman is sticking with the New York Yankees, and Connor McDavid has been traded from the Edmonton Oilers to the New York Islanders.

Narrator: Twitter is not to be believed — even more so than usual.

Each of the tweets seen Wednesday about the above items involving the NBA, NFL, MLB or NHL normally would count as major news in the world of sports, but none was real. Instead, all came from fake accounts, which already were a long-standing and occasionally disruptive issue for Twitter, but seem to be flourishing thanks to a policy change instituted under new owner Elon Musk that allows anyone to pay for a “blue check” to appear to have been verified by the popular social media platform.

James, the four-time NBA champion and four-time league MVP, regularly engages with his more than 52 million followers. So maybe it appeared plausible to some folks that he would request a trade via that medium with his Lakers off to a 2-8 start this season.

He did no such thing, of course.

There were nearly 10,000 engagements with the fake post purporting to be ESPN reporter Schefter relaying information about McDaniels, whose Raiders are 2-6 in his first year in charge: more than 6,000 likes, more than 3,000 retweets and more than 500 replies.

Chapman supposedly told the world — in English and Spanish — that he re-signed with the Yankees for three years. Really? Not long after the team told the closer to stay away instead of including him on the postseason roster after he didn't show up for a mandatory workout? No. Not really. Two-time NHL MVP McDavid supposedly announced that the Oilers, for whom he’s the captain, were done with him. Really? No.

While all that was happening with sports names, Musk held a Twitter Space to make the case to his advertisers that his vision would make Twitter a safer and more reliable experience for users. Many advertisers have pulled out or paused over fears their brands could show up next to hate speech or misinformation.