Falcons' Ryan won't play against Seahawks, Schaub to fill in 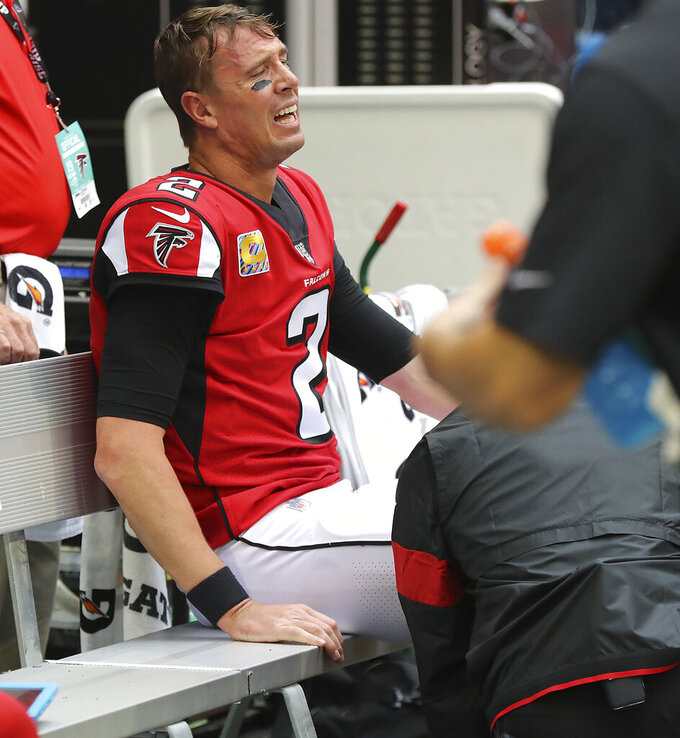 Ryan sprained his right ankle last week in a loss to the Los Angeles Rams. He had limited participation in Friday's practice and was listed as questionable on the team's injury report.

The team announced Saturday that veteran Matt Schaub will start and Ryan won't play against the Seahawks.

Ryan ran in Friday's practice, raising hopes that he would be able to play. However, coach Dan Quinn said a key would be how Ryan responded on Saturday after "we pushed it really hard" on Friday.

"I think you have to push to find out," Quinn said Friday. "Matt really worked hard to put himself in position to have a chance."

Earlier in the week, Quinn said Ryan would not play if he was still limited by the injury.

"We wouldn't put him out there if he couldn't do all the things that he needs to do," Quinn said. "If he was out there where he was playing on one foot, then that wouldn't be the way to go."

The Falcons (1-6) have a bye week after Sunday's game, giving Ryan's ankle more time to heal.

"I've got to do my job," Schaub said Wednesday. "That's my role for this team if I'm called upon to go out there and play. I have to perform my role as a quarterback. Lead the offense."

Ryan, the 2016 MVP, has not missed a game since 2009. He has made 154 consecutive regular-season and nine postseason starts.

Etling, a seventh-round draft pick by New England in 2018, was claimed off waivers by Atlanta before the season.