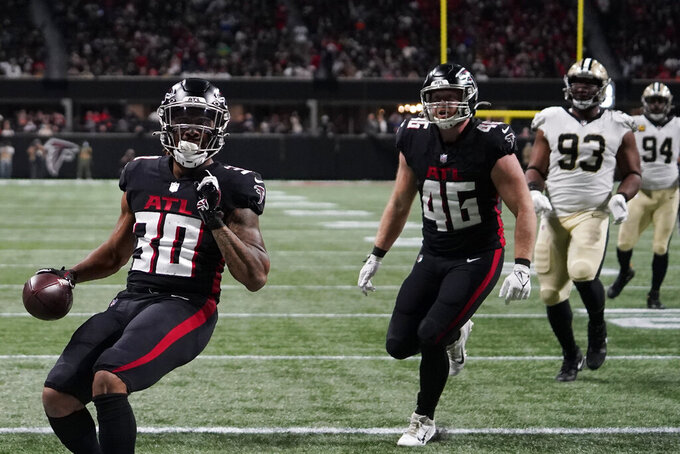 Atlanta Falcons running back Qadree Ollison (30) runs into the end zone for a touchdown against the New Orleans Saints during the second half of an NFL football game, Sunday, Jan. 9, 2022, in Atlanta. (AP Photo/Brynn Anderson)

FLOWERY BRANCH, Ga. (AP) — Lee Smith plans to build a gym and mentor young athletes after announcing his retirement from the NFL.

The 34-year-old tight end spent 11 seasons in the league, playing for the Buffalo Bills, Oakland Raiders and Atlanta Falcons.

Known mostly for his blocking skills, Smith said he's going to build a gym in his hometown of Knoxville, Tennessee, that “allows young athletes to train the way the professional athletes train."

More important, he hopes to be a trusted confidante to those dealing with problems away from the field.

“I never had that person that said, ‘Hey, it’s OK to screw up. It's how you recover from that, it's how you rebound, it's how you don't let one mistake turn into 50 mistakes,'" Smith said in a video message released this week by the Falcons. "I was a 50-mistake kid. It would warm my heart and really bring me a lot of joy in life if I could be a resource to these kids."

His gym will be known as Triple F Gym — “faith, family and football, in that order,” he explained.

“I’m fired up about life after football,” Smith said. “It's time to pass the torch and give on to the next crew and help them be better players, better people and better young men.”

Smith spent six years with the Bills over two stints, sandwiched around four seasons with the Raiders. He was traded to the Falcons to play his final year closer to home.

This past season, while sharing a position with rookie star Kyle Pitts, Smith played in 16 games with six starts for the Falcons. He had nine catches for 65 yards and a touchdown.

Falcons quarterback Matt Ryan said it was “so much fun” playing with Smith in his final year.

“Tough as they come and an unreal teammate,” Ryan wrote on Twitter. “Wishing you the best in this next chapter. Congrats on a great career.”