Falling behind in games continues to haunt Washington 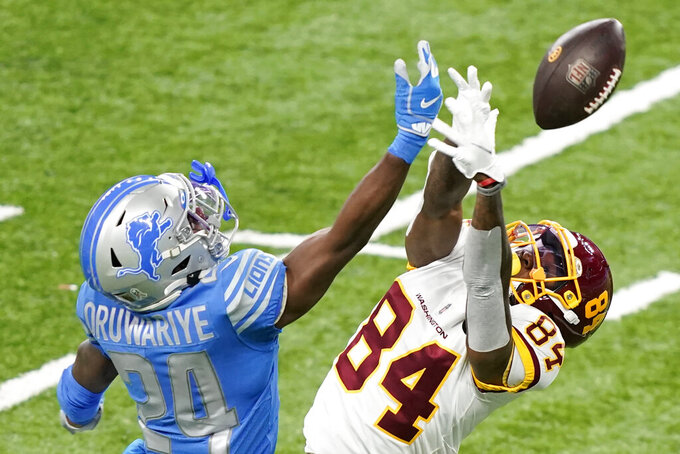 Alex Smith looked up at the scoreboard late in the first half, saw the big “3” next to Washington and started thinking about what went wrong.

He remembered the drive deep into Detroit territory that went backwards and out of field-goal range, the missed kick and the fumble. “I was stunned before half that we had three points,” Smith said.

Trailing by 14 at halftime and 21 in the third quarter, Washington erased that deficit before losing on a buzzer-beating field goal to fall to 2-7. But it was yet again starting slow and digging a deep hole that cost a young team trying to learn on the fly and compete for the division title in the dreadful NFC East at the same time.

Washington has fallen behind by 10 or more points before or at halftime in eight of nine games this season.

“It’s kind of been the thing of the season,” defensive lineman Jonathan Allen said. “It’s been a tale of two halves: We play a terrible ... first half and we come out and we play a better second half.”

That's not a recipe for success, even though next opponent Cincinnati is 2-6-1 and there are just two teams with a winning record left on the schedule. Coach Ron Rivera made it sound like the solution was easy.

“Don’t turn the ball over, take advantage your opportunities to score and stop the opponent from scoring,” Rivera said. “I mean, it’s that simple. We can’t miss opportunities."

Washington does have a real opportunity the rest of the season given no one else in the NFC East has more than three victories, so this team is still in it.

“We know what our record is,” receiver Isaiah Wright said. "We know what we need to do to get to our goals, so that’s really what we’re focusing on, and we’re just trying to keep our spirits high in the locker room and keep everything positive."

Smith piled up a career-best 38 completions and 390 yards in his first start since breaking his right leg in November 2018. That's evidence the passing game can get on track when necessary.

“As a quarterback, you’re a product of the guys around you,” the 36-year-old said. “Certainly lucky to have a lot of guys out there that are working.”

In Smith's words, “100 little things that add up” to learning how to win. Whether it's the defense giving up big plays or the offense stalling, a lot more things need to go right to turn the season around.

“We’re definitely a team with lot of talent that hasn’t figured it out,” Allen said.

Smith isn't just Washington's quarterback of the present. There's now the question of whether he can be the guy next season and beyond, now that he has overcome a severe injury and looks like his old self.

“You’ve got to look at how much longer do you think he can play, how much longer does he want to play and if so, is he part of your plan?” Rivera said. “That’s something that we as a coaching staff and as an organization have to talk about, most certainly if this continues — if he continues to play at this high level.”

Kicker Dustin Hopkins may have saved his job by making a 41-yard field goal with 16 seconds left against Detroit. But he missed on an attempt in the first half and is 12 of 17 this season.

That 70.6 percent field goal rate ranks 30th in the NFL, and Hopkins' status is up in the air.

Safety Deshazor Everett left the Lions game with an ankle injury and underwent X-rays. Washington is already thin in the secondary with Landon Collins done for the season, but is this enough for Rivera to call old friend Eric Reid back and offer him a real spot and not a role on the practice squad?

Get Chase Young back on the practice field after his roughing the passer penalty set up Detroit for its game-winning field goal. The No. 2 pick seems to be handling his “rookie mistake” well and should be motivated against one-time college teammate Joe Burrow, whom the Bengals selected instead of Young in the draft.