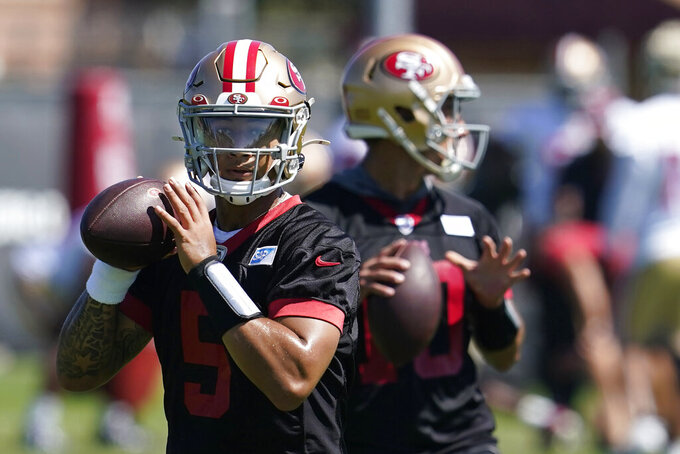 FILE - San Francisco 49ers quarterbacks Trey Lance, left, and Jimmy Garoppolo take part in drills at the NFL football team's practice facility in Santa Clara, Calif., Thursday, Sept. 1, 2022. Lance is ready for his first full season as starting quarterback for the San Francisco 49ers despite getting almost no game action the past two seasons and with former starter Jimmy Garoppolo back on the bench behind him.(AP Photo/Jeff Chiu, File)

With the elite passers and the rushing quarterbacks taking up the top six spots this week, we’re left with a long list of appealing names at the lower end of the QB1 conversation.

Frankly, this tier will make up a lot of our starters this week (and most weeks).

An interesting pair of names tie for 13th in top-12 odds: Trey Lance and Tua Tagovailoa.

In two full games last season, Lance averaged 17.8 half-PPR fantasy points on the back of 12.0 rushing attempts for 60.0 yards with a 37.5% red zone rushing share. The rushing upside is phenomenal here. If you have him, feel good to start him in most scenarios.

In 2021, Tagovailoa played largely to expectation and had an EPA per drop back over expected of +0.01. However, Tua will have Tyreek Hill and Jaylen Waddle to throw to against the New England Patriots this year, and the Miami Dolphins have a sturdy 25.0-point implied team total, tied for 10th best on the week.

Matthew Stafford is another intriguing name on the list. He sits 15th in top-12 odds at 38% despite playing in a game with a total of 52.5 points. Despite that, his Los Angeles Rams are 2 1/2-point home underdogs against the Buffalo Bills, and they’ve got the same total as the Dolphins (25.0 points).

The game environment is largely good, yet the matchup against a good pass defense should give us pause about plugging in Stafford if we have a name available to us higher up on the list. Of course, simply calling him a “sit” is misguided because he’s still a cut above the names in the tier below him.

Bench if possible: These quarterbacks are under 35% likely (16th or worse) to net a top-12 result and likely aren’t in the one-quarterback-league conversation.

Antonio Gibson went from sliding down the draft board during most of the offseason to being a pretty sturdy Week 1 start due to unfortunate news of teammate Brian Robinson’s injuries. Gibson is now slotted for an elevated early down role as a slight home favorite (-2.5) over the Jacksonville Jaguars. Gibson is actually ranked sixth in projected carries (17.8) for the week, based on our fantasy football projection model.

Also in that game, we have Travis Etienne set to make his NFL debut after missing all of last season. Teammate James Robinson will play in Week 1 just nine months after a torn Achilles. Indications are that Robinson won’t handle a full workload early in the season, thus leaving a featured opportunity for Etienne to lead the backfield. In what is projected to be a close game, Etienne should see creative snaps and targets, thus boosting his floor and ceiling.

Dameon Pierce’s ascent to the top of the Houston Texans’ unofficial depth chart has him pretty firmly within the start-able tier of running backs in Week 1 despite his status as a 7.5-point home underdog to the Indianapolis Colts. The team parted ways with Marlon Mack, yet Rex Burkhead figures to handle third down work. That does leave some risk in the event Pierce is scripted out of an early blowout, which is why he’s down near the 45% range. The risk is factored into the simulation.

Start with confidence: You’re starting these guys in a 12-team league. They are at least 50% likely to be top-24 receivers this week.

Although Terry McLaurin is generally landing around WR20 in weekly rankings, the numberFire projections like him more than that in a matchup against the Jaguars. McLaurin maintained a 93.5% route rate and averaged 103.9 air yards per game last season. His role should remain stable, and although the Washington Commanders offensive output may not be consistent week to week, it’s expected to be decent in Week 1 with an implied total of 23.0 points.

Jerry Jeudy (40%) trails Courtland Sutton (44%) only slightly in the simulations. Despite that, you’ll see a bigger gap in consensus rankings for the two in Week 1 against the Seattle Seahawks. In nine games last season during which both played at least half of the Denver Broncos offensive snaps, Jeudy out-targeted Sutton 5.4 to 3.9 (or 20.0% to 14.3%) despite a 90.0% route rate for Sutton and a 78.9% route rate for Jeudy.

Yes, there’s a massive quarterback shift, but don’t treat Jeudy as a Week 1 afterthought if you need receiver help.

DeVonta Smith often finds himself outside the top 30 in the weekly consensus rankings, but is clinging to a 32% chance of a top-24 week against the Detroit Lions. He’ll be the second receiver option behind A.J. Brown in the Philadelphia Eagles’ run-heavy offense, but is still tied to a 26.0-point implied team total and is playing indoors. That’s a nice recipe for a ceiling game for a speedster who now has help to draw coverage away from him.

Dalton Schultz is stepping into a substantial role with the Dallas Cowboys. The team parted ways with Amari Cooper, and Michael Gallup will likely miss Week 1. That could leave Schultz as the de facto No. 2 option for one of the NFL’s best offenses. Schultz averaged 6.1 targets per game last season and could see that number climb during the early weeks while Dak Prescott features CeeDee Lamb and Schultz over the rest of the receiving group.

Albert Okwuegbunam finds himself inside the projections’ top 11, and that’s a bit higher than you’ll likely find him ranked elsewhere. Okwuegbunam and the Denver Broncos are road favorites against the Seattle Seahawks in Russell Wilson’s first game with Denver — and against his former team, no less. Positive game scripts are good for tight ends because they rely on touchdowns. Seattle also ranked 27th in adjusted fantasy points per target allowed to tight ends a season ago.

For those who truly waited on tight end (or for those whose TE1 may be injured for Week 1 already), take a look at David Njoku. The Browns no longer have Austin Hooper on their roster, and this offseason, Njoku earned a four-year deal to make him the fifth-highest paid tight end in the NFL.

Additionally, his new quarterback, Jacoby Brissett, has relied heavily on tight ends in his past two extended workloads. In 2021 with Miami, Brissett targeted tight end Mike Gesicki and receiver Jaylen Waddle 43 times apiece to lead the team while he was under center. In 2019 while with the Indianapolis Colts, Brissett targeted tight end Jack Doyle 64 times, just four shy of the team lead.