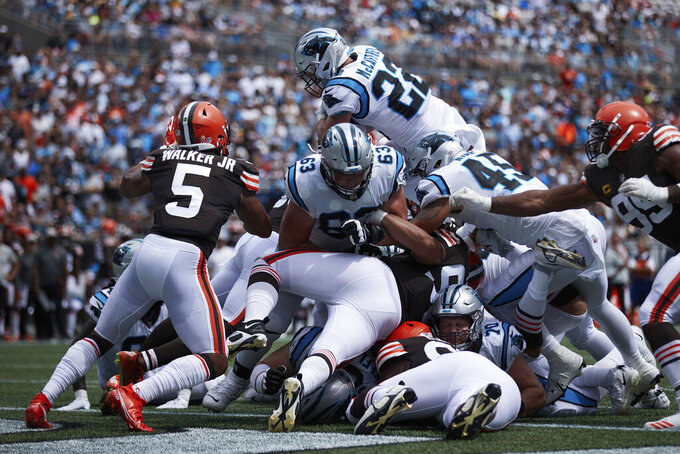 Carolina Panthers running back Christian McCaffrey (22) leaps over the pile to score a touchdown during an NFL football game against the Cleveland Browns, Sunday, Sep. 11, 2022, in Charlotte, N.C. (AP Photo/Brian Westerholt)

With 10 quarterbacks comprising a hefty number of top-12 weeks in the simulations, there aren’t many Tier 2 options who stand out. Just five more passers have at least 35% odds to get inside the top 12 in Week 2.

Trey Lance’s Week 1 was marred by bad weather and a slow pace from the Chicago Bears. He still managed to rush 13 times for 54 yards and had three red zone carries. If you drafted him for the rushing upside, don’t panic yet.

Although last season’s QB3, Tom Brady, didn’t have to do much in Week 1 against the Dallas Cowboys, it is worth noting that the Tampa Bay Buccaneers ranked 26th in pass rate over expectation in the opening week. While it’ll be harder to establish the run against the New Orleans Saints this week, if we see run-heavy tendencies from Tampa Bay again, perhaps Brady will be best viewed as a potential avoid in non-elite situations, given that he needs passing volume to accrue fantasy points. We’ll learn a lot this week about the 2022 Buccaneers’ offense.

The most obvious “streamer” candidate in this tier is Carson Wentz. Wentz draws the Detroit Lions, who rank 29th in adjusted pass defense after the opening week of the season, according to numberFire’s metrics. Wentz, last week, ran six times for just 12 yards, but surpassed 300 passing yards and threw for four touchdowns. Wentz should benefit from a matchup with a team that ranked 32nd in pass rush grade, by PFF, in Week 1. The Washington Commanders ranked 10th in pass blocking grade.

Consider if needed: This tier is sitting between 40% and 59% for an RB2 week, and you’re probably starting them even if they’re shy of that top tier.

Cordarrelle Patterson got off to a hot start to the 2021 season and found Week 1 success this year, as well. Patterson put forth a 59.1% rushing success rate, per numberFire’s metrics, on 22 carries, and he drew five targets. However, Patterson’s 63.4% snap rate is a little concerning. If he can continue to be a high-usage-rate player, then we can consider starting him in fantasy football formats, of course, but this is a bit reminiscent of his hot start last year.

Ultimately, aside from James Conner and Leonard Fournette, this tier is largely made of players with committee roles. That was well known entering the season for some of these names — but not all.

Josh Jacobs played on just 58.9% of the Las Vegas Raiders’ snaps in Week 1 and drew only a single target in addition to his 10 carries. Jacobs was relegated to an early down role (he didn’t play any third down snaps), and it’s Brandon Bolden who was the Raiders’ third down back (72.7% third down snap rate). That’s not what you want to see from a fantasy football starter, but it’s also hard to ignore a heavy claim to the rushing and red zone work. Jacobs played on 8 of 10 red zone snaps in Week 1.

Darrell Henderson’s 81.8% snap rate ranked second at the position in Week 1 behind only Saquon Barkley’s 82.8%, and even if Henderson enters more of a timeshare with Cam Akers as the season progresses, there’s room for him to be solid with a role reduction.

Ezekiel Elliott’s snap rate of just 57.8% is concerning, given that he’s now tied to a subpar passing offense led by Cooper Rush, who was the least efficient quarterback in Week 1 on a per-play basis, according to numberFire’s metrics. Logic dictates that Elliott will be leaned on more with Rush under center, yet low offensive expectations push him well into the middle of the second tier.

numberFire’s projection model is still pretty high on CeeDee Lamb despite his quarterback downgrade. Lamb ran a route on 97.8% of the Cowboys’ offensive drop backs and played on 96.9% of their snaps in the opener. That led to 11 targets — but just two catches for 29 yards. Lamb, then, accounted for just 3.9 half-PPR fantasy points yet had an expected output of 14.7, via my model. That’s the largest underperformance of any flex player in Week 1, so perhaps a bounce-back is in order in Week 2.

Jerry Jeudy’s workload in Week 1 compared favorably to Courtland Sutton’s. They each had seven targets and two downfield targets, and Jeudy even out-targeted Sutton two to one in the red zone. However, the seven targets work out to just a 17.1% target share, a fairly worrisome tally in what was a pass-heavy script for Denver.

Although that shouldn’t matter too much this week in a game where the Denver Broncos project to score 27.5 points, sub-20% target shares for Sutton and Jeudy would be far from ideal all season.

Let’s check in on DK Metcalf and Tyler Lockett. Metcalf caught all seven targets last week for just 36 yards, and his average depth of target was only 4.6 yards downfield. Even with a 25.9% target share, he posted an expected fantasy point output of 9.4 points. Lockett saw four targets of his own with a below-receiver-average depth of target of 7.7, on average. They’re just borderline top-24 plays in the simulations, but remain integral pieces to the Seattle Seahawks’ offense based on their route rates. Just don’t anticipate huge games if the usage stays so close to the line of scrimmage.

During draft season, Dallas Goedert was part of the second tier at tight end before a tier drop, so he didn’t exactly have top-five expectations. That being said, we should feel a little uneasy about his role in Week 1. Yes, Goedert ran 84.8% of the Philadelphia Eagles’ pass routes, but he generated only four targets for 6.6 air yards. That’s not his average depth of target; that’s total air yards. A 13.8% target share in a run-heavy offense can work if there’s some downfield leverage involved, yet it doesn’t help that red zone usage was concentrated on A.J. Brown and Kenneth Gainwell. Start Goedert but watch for how his role progresses.

Tight end is pretty wide open this week, as we saw very little in the way of convincing roles overall at the position during Week 1.

Given that, we should be open to Tyler Higbee, whose 26.8% target share ranked second best at the position in Week 1 despite weak production on those 11 targets (five catches for 39 yards). Speaking of a second-best rate, Higbee’s 93.9% snap rate trailed only Dalton Schultz’s 100.0% in Week 1 among all tight ends.

Another noteworthy target total belonged to Pat Freiermuth, who had 10 targets in a long overtime game. That still equated to a 27.0% target share. That was the highest target share of any tight end in Week 1. His air yards share (24.1%) trailed only Travis Kelce (31.1%), Kyle Pitts (30.6%) and Mark Andrews (26.9%). That’s great company.