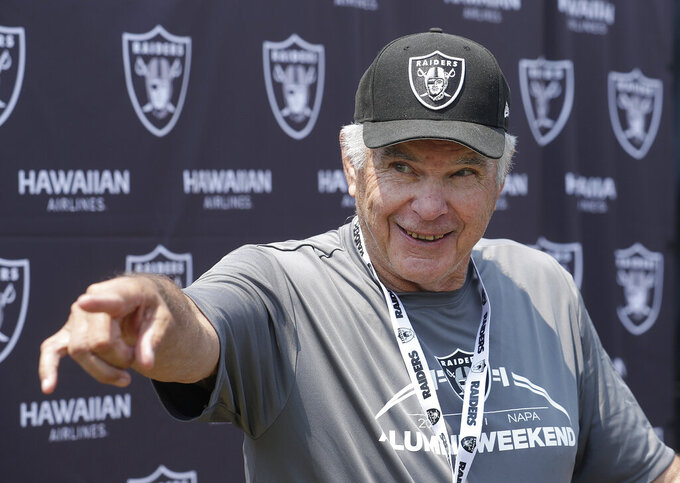 FILE - Former NFL football player Daryle Lamonica speaks at a news conference as part of Oakland Raiders alumni weekend after a Raiders NFL football practice in Napa, Calif., Saturday, July 28, 2018. Lamonica, the deep-throwing quarterback who won an AFL Player of the Year award and led the Raiders to their first Super Bowl appearance, has died. He was 80. The Fresno County Sherriff's said Lamonica passed away at his Fresno home on Thursday morning, April 21, 2022. (AP Photo/Jeff Chiu, File)

Daryle Lamonica, the deep-throwing quarterback who won an AFL Player of the Year award and led the Raiders to their first Super Bowl appearance, has died. He was 80.

The Fresno County Sherriff's said Lamonica passed away at his Fresno home on Thursday morning. The death is considered to be from natural causes.

The Raiders acquired Lamonica in a trade from Buffalo in 1967 and he was immediately the perfect fit for the vertical offense owner Al Davis coveted for his franchise.

Nicknamed the “Mad Bomber,” Lamonica made an immediate impact in Oakland after starting only four games in four seasons with the Bills.

Lamonica's deep arm teamed up with receivers such as Warren Wells and Fred Biletnikoff and turned the Raiders into a powerhouse. They went 13-1 his first season as Lamonica was a first-team All-Pro and AP AFL Player of the Year when he led the league with 30 touchdown passes.

Lamonica then threw two TD passes in a win over Houston in the AFL title game to send the Raiders to their first Super Bowl where they lost 33-14 to Green Bay.

In his six seasons as a starter for the Raiders, Lamonica was one of the most prolific passers in the game, leading led pro football with 145 TD passes — 24 more than second-place Fran Tarkenton. His 16,006 yards passing ranked third from 1967-72.

Lamonica was an All-Pro again in 1969 when he led the AFL with 3,302 yards passing and 34 touchdowns. The 34 TDs still stand as the franchise's single-season record more than a half-century later.

Lamonica was at his best during the playoffs, throwing five TD passes in a 41-6 win over Kansas City in 1968 and a record six the following season against Houston. Only Steve Young and Tom Brady have matched Lamonica's six TD passes in a playoff game and only Patrick Mahomes and Kurt Warner have multiple games with at least five.

Lamonica also played a starring role in one of the most memorable games ever, throwing four TD passes, including the go-ahead score to Charlie Smith in a 43-32 win over the Jets in a game now known as the “Heidi Game” because NBC cut away from the finish on the East Coast before the Raiders comeback to show the children's movie.

Lamonica was replaced as the starter in 1973 by Ken Stabler and went to the World Football League the following season where he finished his career.

Lamonica finished his career with 19,154 yards passing and 164 TDs. The Raiders went 62-16-6 in Lamonica's starts for the best winning percentage for any starting QB in the Super Bowl era with at least 75 starts.

Lamonica was born and raised in Fresno before going to college at Notre Dame. He was drafted in the 12th round by Green Bay and the 23rd round by the Bills in 1963 and opted to go to the AFL. He was a backup to Jack Kemp in Buffalo before becoming a star in Oakland.