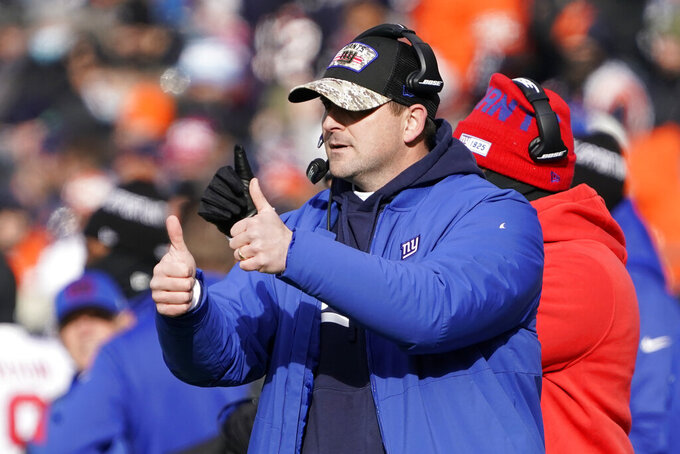 New York Giants head coach Joe Judge signals his team during the first half of an NFL football game against the Chicago Bears Sunday, Jan. 2, 2022, in Chicago. (AP Photo/David Banks)

BETTING LINE: Washington by 7, according to FanDuel SportsBook.

TURNOVER DIFFERENTIAL: Washington plus-1; Giants minus-5.

WASHINGTON PLAYER TO WATCH: : Rookie LB Jamin Davis got a season-low 13 defensive snaps against the Cowboys, and coach Ron Rivera is unsure whether he should play in the middle or outside moving forward. It has been a slow adjustment to the NFL for the 19th overall draft pick, and the pressure is arguably on him more than any other player on Washington’s defense to carve out his future role.

GIANTS PLAYER TO WATCH: Jake Fromm. With Mike Glennon out with a wrist injury, the second-year quarterback is likely to get his second career start in the finale. His first one against the Philadelphia Eagles the day after Christmas was very forgettable. He was 6 of 17 for 25 yards in two-plus quarters. Fromm was lifted in the third quarter after throwing an interception that led to a go-ahead score. His only other appearance came the week before when he was 6 of 12 for 82 yards against Dallas, playing the final series in garbage time. This will be a chance to show the team he can play.

KEY MATCHUP: How the Giants defend Washington star receiver Terry McLaurin. He had 11 catches for 107 yards and a touchdown on Sept. 16. Pat Graham's defense has tended to play two-high coverage most of the season but occasionally the Giants have had cornerback James Bradberry travel with an opponent's top receiver. There's also a chance the Giants can double McLaurin and force QB Taylor Heinicke to find someone else.

KEY INJURIES: Washington TE Ricky Seals-Jones is expected to be out after injuring his neck against Philadelphia and going into concussion protocol. ... CB William Jackson III could also miss a third consecutive game with a calf injury. ... Glennon is the second Giants QB lost for the season. Starter Daniel Jones had a neck injury in late November. Fromm probably will start with Brian Lewerke up from the practice squad as No. 2. ... WR Kadarius Toney missed last week with a shoulder injury and his status is uncertain.

SERIES NOTES: Washington has not beaten the Giants at MetLife Stadium since 2018. The team is 21-33 all time at New York. The Giants have won five of the last six overall.

STATS AND STUFF: Heinicke set career highs with 34 completions and 336 passing yards in Week 2 against the Giants. He had two touchdowns and one interception. ... Rivera is sticking with Heinicke as the starter, though backup Kyle Allen could see some action. ... Rookie RB Jaret Patterson had a career-high five receptions, 98 scrimmage yards and his second career rushing TD last week vs. Dallas. ... McLaurin is 40 yards receiving away from a second consecutive 1,000-yard season. He led the team with seven catches and 61 yards last week. ... WR Cam Sims had a career-best four catches against the Cowboys. ... With Seals-Jones and top TE Logan Thomas out, rookies John Bates and Sammis Reyes get more work ... Rookie RT Sam Cosmi is expected to return after missing last week while on the COVID-19 list. LG Ereck Flowers could also return. ... DT Jonathan Allen leads Washington with a career-high 8½ sacks. ... LB Cole Holcomb led the team with 11 tackles against Dallas. ... S Kamren Curl has made 95 tackles this season, including eight or more in each of the past three games. ... P Tress Way is expected to return after missing his first game in eight NFL seasons because of the COVID-19 protocol. ... The Giants have lost five straight ... New York had a season-low 151 yards in total offense last week, including 24 yards passing. Glennon finished 4 of 11 with two interceptions. ... The Giants rushed for 163 yards against Chicago, two shy of their season high set in the first game against Washington. ... Saquon Barkley had his best game since tearing his ACL in September 2020, gained 102 yards on 21 carries against the Bears. ... LB Lorenzo Carter aims for fourth straight game with a sack. ... LB Azeez Ojulari ranks third among rookies with 8 sacks. ... CB James Bradberry's interception against Chicago gave him a career-high four for the season. ... LB Tae Crowder had his second career pick last week. He has a career- and team-high 118 tackles. ... DB Logan Ryan is second with 11O tackles.