Hold the line: Steelers like depth with DE Tuitt uncertain 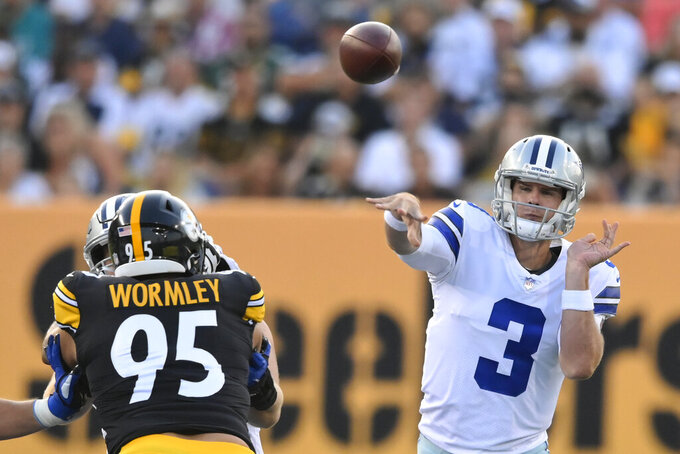 PITTSBURGH (AP) — Chris Wormley is ready to do whatever the Pittsburgh Steelers ask. Nose tackle. Defensive end. Line up in a four-point stance. Stand up. Whatever.

Good thing, because the Steelers will need the 27-year-old to be flexible, particularly with Stephon Tuitt's status uncertain as the opener against Buffalo looms on Sept. 12.

Tuitt has not practiced with the team at any point during training camp. While coach Mike Tomlin stressed Tuitt is “fine,” Tuitt is dealing with the loss of younger brother Richard Bartlett III. The 23-year-old Bartlett was killed in a hit-and-run accident in Atlanta in June. Wormley said Tuitt has remained a presence in the locker room while he grieves.

“We’re giving him as much time as he needs,” Wormley said. “I think, you know, him being around us has been great not only for us but for him.”

Tomlin declined to get into specifics when asked Monday about Tuitt's availability for the opener. Tuitt is coming off a season in which he had a career-high 11 sacks for the AFC North champions.

A year ago, missing Tuitt would have been problematic. Yet the Steelers do appear to be better equipped to push forward if Tuitt doesn't suit up against the Bills.

Wormley, a 2017 third-round pick by Baltimore traded to the Steelers in March 2020, is coming off a solid camp, a stark contrast to his difficult first summer with Pittsburgh when he was limited by a lower-body injury. He struggled to get into the defensive line rotation early in the 2020 season then spent three weeks on injured reserve with a knee injury.

That hasn't been the case in 2021. Wormley was disruptive at times during the preseason and feels he is building momentum toward becoming more than just a bystander this fall.

“That was my No. 1 goal for this camp, just to stay healthy, and for the most part I have,” Wormley said. “Just to get those reps day in and day out and continue to build on what I did the day before and the preseason games ... is so important because I didn't get that time last year.”

The 6-foot-5, 300-pound Wormley has the kind of rangy size that can disrupt passing lanes and the strength where he believes he can tie up interior linemen if necessary, though those duties will mostly fall to 34-year-old Tyson Alualu and perhaps some combination of Isaiah Buggs and Carlos Davis or even Henry Mondeaux.

The Steelers took late fliers on Buggs (sixth round, 2019) and Davis (seventh round, 2020) and Isaiahh Loudermilk (fifth round, 2021) in the draft and all have impressed at times during camp. Throw in Mondeaux, who is becoming a special teams ace, and the coaching staff could have a tough decision to make when rosters are trimmed to 53 on Tuesday.

Tomlin described the group as a “good mix" that offers a little bit of everything.

“We’ve got some young guys with talent,” Tomlin said. “We’ve got some older guys that know what it is they’re doing. And when you have that, you’ve got the ingredients for a good group. The old guys understand the standard. They assist in the coaching and maturation of the young guys.”

While the Steelers did lead the NFL in sacks for a fourth straight season — with Tuitt, Wormley, Cam Heyward and Alualu combining for 18 of the team's 54-sack total — they did wilt a bit against the run down the stretch. Opponents averaged 124.5 yards rushing during Pittsburgh's 1-5 finish following an 11-0 start.

It's a number that needs to go down, and the defensive line's performance will go a long way toward determining whether it happens or not. Wormley is excited about the potential of the group, particularly whenever Tuitt's familiar No. 91 returns to the huddle.

“I think the biggest thing for all of us is when he does come back into play, we don’t skip a beat,” Wormley said. “And I think that’s what he’s working toward right now.”

NOTES: All-Pro S Minkah Fitzpatrick and second-year WR Chase Claypool exchanged heated blows near the end of practice on Monday. While Tomlin claimed he didn't see the fight and declined to go into specifics about his very loud post-practice talk to the team — which was audible from 50 yards away — Wormley and second-year guard Kevin Dotson called it part of what can happen at camp. "If you’re going to compete, competitors are going to fight,” Doston said. “(Fitzpatrick and Claypool) are two of our biggest competitors. So, I kind of almost expect it to happen at least once.” ... RT Zach Banner did not practice on Monday, with Chuks Okorafor switching from left to right tackle to take Banner's spot. Rookie Dan Moore Jr. took reps with the starters at left tackle.