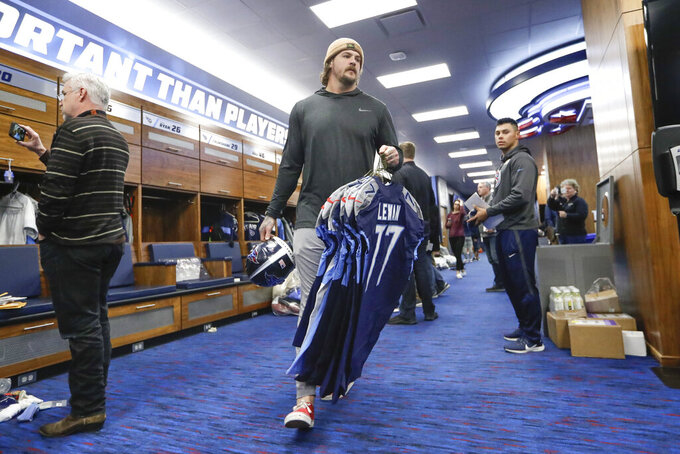 NASHVILLE, Tenn. (AP) — Mike Vrabel knows wins and losses are the only true measure for the Tennessee Titans. Coming up one win shy of the franchise's first Super Bowl berth in 20 years even after a 2-4 start means they still have plenty of work ahead.

The Titans cleaned out lockers Monday, a day after being beaten 35-24 by the Kansas City Chiefs in the team's first AFC championship game in 17 years. Tennessee finished 11-8 after a fourth straight 9-7 record during the regular season, and the Titans haven't won the AFC South or hosted a playoff game since 2008.

Going 7-3 on the road was nice. The Titans impressed in clinching their second playoff berth in three seasons with a win at Houston before upsetting the defending champs in New England in the wild-card round before knocking off top-seeded Baltimore in the divisional round. Four road trips in four weeks took a toll.

“We have a long way to go, and we have to host some of those games,” Vrabel said. “Now we have to get to the point where we host them, but I think we improved. We're a better team now than we were at any point during the season, better than we were last year.”

Vrabel praised Henry's growth as a leader in a season where the 2015 Heisman Trophy winner ran for a league-high 1,540 yards in 15 starts before becoming the first to run for at least 180 yards in three consecutive games. Vrabel noted Tannehill was selected Monday to his first Pro Bowl as a replacement for Chiefs quarterback Patrick Mahomes, impressive for a quarterback who didn't start until Week 7.

Talk of contracts or looming negotiations will wait until Vrabel meets with general manager Jon Robinson.

“Our focus has always been about beating the Chiefs,” Vrabel said. “That didn't happen. Now our focus is on the offseason.”

The first person Vrabel called when hired by the Titans two years ago was Pees, and Vrabel lured him out of a very short retirement after leaving the Ravens. Pees, who turned 70 last September, said this retirement is final after 16 seasons in the NFL with the Patriots, Ravens and now the Titans. Pees was among nine defensive coordinators to go to Super Bowls with two different teams and just missed becoming the first to do that with three.

“I talked him out of retirement once,” Vrabel said. “I didn't have the heart to do it a second time."

Tannehill and Henry are among 18 pending free agents for Tennessee, a list that also includes starters such as right tackle Jack Conklin and cornerback Logan Ryan. Conklin said he'd like to be back, but the Titans didn't pick up the fifth-year option for the tackle they drafted eighth overall in 2016. Ryan said right now he's looking for a job after finishing his three-year contract.

Spotrac.com estimates the Titans will have at least $57 million in salary cap space for 2020 with Tannehill potentially worth $30.6 million a year and Henry $13.3 million. The Titans will be able to use both the franchise and transition tags if needed.

The Titans will pick No. 29 in April, and they certainly got everything possible out of five of their six rookies this season. They led the NFL with the most snaps by rookies through the first two games in the playoffs getting a combined 572 snaps or an average of 286 snaps per game before the title game.

Wide receiver A.J. Brown led all rookies with 1,051 yards receiving in the regular season, and defensive tackle Jeffery Simmons, their first-round pick, played 13 games after tearing an ACL last February. Simmons said his goal after a full offseason is shedding the knee brace he wore once activated last October.

The management is in place, and Vrabel sure looks to be the right coach. Tannehill made the case he can be their quarterback after leading the NFL with a career-high 117.5 passer rating. He also helped the Titans tie for third in the NFL with 54 total TDs while averaging 30.4 points a game with him as starter.

Now they must improve on defense and find an outside pass rusher to complement linebacker Harold Landry and Pro Bowl defensive lineman Jurrell Casey and Simmons on the interior. Red zone defense also must improve after ranking next to last in the NFL in allowing touchdowns on 68% of trips inside their 20. And oh yeah, earn the right to host a playoff game.

“It's just a special year, but most definitely being able to host a playoff game is next on my list for sure,” safety Kevin Byard said.

They also must make sure they have a good kicker healthy and available for 2020. Ryan Succop started and finished the season on injured reserve, but the Titans went through five kickers in finishing the season last in the NFL on field goals at just 44.4%. Succop is under contract for three more seasons, and Greg Joseph ended a six-game drought without a made field goal with a 30-yarder in Kansas City.