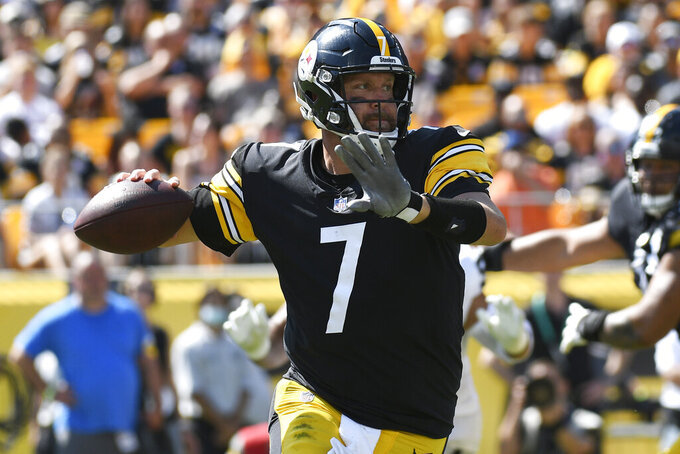 Pittsburgh Steelers quarterback Ben Roethlisberger (7) throws a pass during the first half of an NFL football game against the Las Vegas Raiders in Pittsburgh, Sunday, Sept. 19, 2021. (AP Photo/Don Wright)

OPENING LINE: Steelers by 3, according to FanDuel SportsBook.

AGAINST THE SPREAD: Cincinnati 2-0; Pittsburgh 1-1.

TURNOVER DIFFERENTIAL: Bengals minus-2; Steelers even.

BENGALS PLAYER TO WATCH: DT D.J. Reader. The massive 6-foot-3, 347-pound Reader is healthy, and Cincinnati's run defense has been solid as a result. He picked up his first sack since 2019 last week against Chicago and his presence in the middle could make it difficult for the Steelers to find much running room for rookie RB Najee Harris.

STEELERS PLAYER TO WATCH: WR Chase Claypool. The second-year wideout has become one of the best deep threats in the league and hauled in a 52-yard heave from QB Ben Roethlisberger last week. Perhaps the best way for Pittsburgh to jump-start the league's 32nd-ranked running game is by stretching the defense to create space for Harris to work.

KEY MATCHUP: Pittsburgh's struggling offensive line against Cincinnati's defensive front. The Steelers are last in the NFL in rushing through two weeks and face a Bengals defense allowing just 3.4 yards per carry. With Roethlisberger banged-up, Pittsburgh desperately needs to get something going on the ground to take some pressure off the 39-year-old quarterback.

SERIES NOTES: Pittsburgh has dominated the Bengals for the better part of the last three decades and has won 14 of the last 16 meetings overall. Cincinnati's upset home win last December, however, hinted at the cracks emerging in what became Pittsburgh's 1-5 slide to end the season following an 11-0 start. ... The Steelers have won five straight against the Bengals at Heinz Field. ... Bengals QB Joe Burrow still is looking for his first victory against an AFC North opponent (0-4). ... Roethlisberger is 26-7 against Cincinnati.

STATS AND STUFF: Burrow struggled in his lone start against the Steelers last season, completing 21 of 40 for 213 yards and a touchdown while getting sacked four times. The top overall pick in the 2020 draft will try to bounce back after throwing interceptions on three consecutive snaps in a loss last week to Chicago. ... Cincinnati RB Joe Mixon is averaging a healthy 5.2 yards per carry in six career games against Pittsburgh. ... The Bengals are 9-7 when Mixon has at least 20 carries. ... Cincinnati P Kevin Huber will play in his 193rd game, moving past former QB Ken Anderson into third-place on the team's games played list. ... Roethlisberger needs two TD passes to become the eighth player in NFL history to reach 400 in his career. ... The Steelers are trying to avoid dropping their first two home games of the season for just the third time since 2000 (2013, 2018). ... Harris is averaging just 3.2 yards per carry through two games. The former Alabama star only averaged below 3.2 yards per carry once in four years with the Crimson Tide. ... The Steelers have five sacks through two games but struggled to generate pressure after Watt exited in the second quarter last week. Las Vegas QB Derek Carr threw for 263 yards and two touchdowns in the second half with Watt watching from the sideline in sweatpants. ... Pittsburgh's defensive depth will be tested. With Alualu and Stephon Tuitt (knee) out, Chris Wormley, Isaiah Buggs and rookie Isaiahh Lowdermilk figure to get more snaps against an offensive line that could heavily on RB Mixon.

FANTASY TIP: Bengals rookie WR Ja'Marr Chase is averaging 22.1 yards per reception and has scored a touchdown in each of his first two games. He faces a Pittsburgh secondary that could be shorthanded once again. If the Steelers can't put pressure on Burrow, Chase could have a big day.