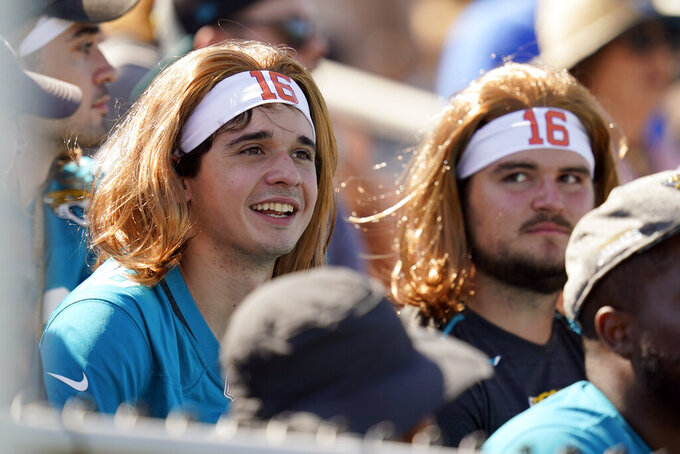 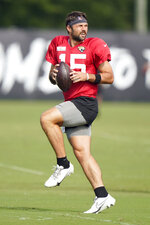 Meyer declined Thursday to identify a starter for the team’s preseason opener against Cleveland on Saturday night, a puzzling decision for anyone who has watched Trevor Lawrence outperform Gardner Minshew daily in training camp.

Meyer said both will play against the Browns.

Lawrence, the top pick in the 2021 NFL draft, and Minshew, a two-year starter in Jacksonville, have split repetitions with the first-team offense during training camp. Meyer wants “healthy competition” at every position, including quarterback.

Nonetheless, just about everyone outside Minshew’s camp expects Lawrence to be Jacksonville’s starter when the Jaguars open the season Sept. 12 at Houston. Lawrence is the No. 1 pick, the top college prospect in nearly a decade, and has simply been better than Minshew in camp.

Lawrence has completed 70% of his passes in team drills, with 24 touchdowns and six interceptions. Minshew has a similar completion percentage, with 16 touchdowns and an interception. Minshew also scrambles more and throws fewer passes down the field.

“I feel like I’ve come a long way, especially in camp with just owning it and knowing where my answers are and being able to make adjustments,” Lawrence said. “I think that’s the biggest thing, transitioning from college to the NFL. You’re going to see a bunch of different looks and it’s really about how you respond and adjust it to put you in a good situation.

“That’s something I’ve just had to learn and I’ve gotten a lot better at it the past few weeks. I feel good about where I’m at and where the offense is. There’s still a long ways to go, but we’re making progress for sure.”

Despite Lawrence’s headway, Meyer still isn’t ready to publicly commit to him with the regular-season opener a month away.

Many figured it would be a no-brainer to start Lawrence in the preseason opener because it’s his professional debut and Jacksonville’s lone exhibition game at home. But Meyer claimed he and his staff were still finalizing those details.

“They’ve been great helping me navigate those questions,” Meyer said.

Lawrence went 34-2 at Clemson with the third-best winning percentage by a starting quarterback (minimum 30 starts) in college football since 1978. He finished his college career undefeated in regular-season play and led the Tigers to the national championship as a freshman in 2018.

After a slow start to the offseason – Lawrence had surgery to repair a torn labrum in his non-throwing shoulder in February and then was hampered by a strained hamstring in organized team activities – he has looked every bit as advertised in camp. Teammates rave about his arm, his mobility, his touch on deep passes and his command of the huddle.

Minshew, meanwhile, looks about like he did last year. He’s undersized and has a mediocre arm and average mobility. He is 7-13 in 20 career starts for Jacksonville. He appeared to be on the trading block in March when the Jaguars signed former San Francisco backup C.J. Beathard to a two-year contract worth $5 million.

But for now, at least according to Meyer, Minshew is in the starting mix.

“He's earned my respect," Meyer said. "I love that guy. He’s a warrior competitor. He's a fighter. I told him that. I just have great respect for Minshew. He brings it every day now, every day.”