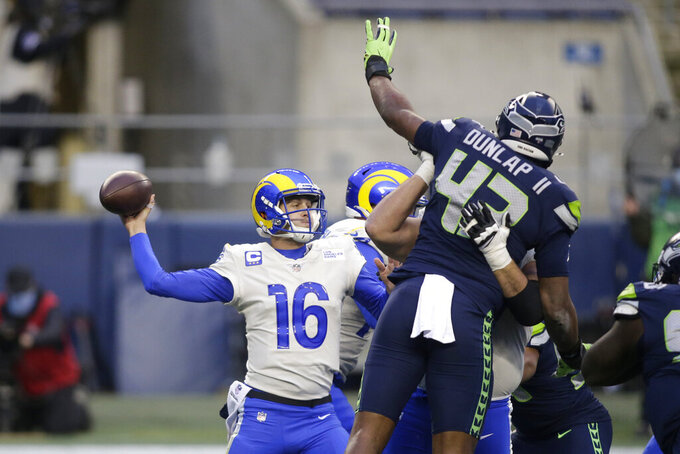 They're in complete accord this week, however: Goff is the best choice to lead the Los Angeles Rams in the playoffs.

Goff will start the Rams' postseason game at Green Bay on Saturday, while John Wolford will be inactive one week after incurring a neck injury, McVay announced Thursday.

The Rams (11-6) are headed to Lambeau Field to face the top-seeded Packers (13-3) behind Goff, who has started 73 of Los Angeles' last 76 games since he made his debut as a rookie in late 2016. He also came off the bench last week to lead the Rams to a 30-20 playoff victory in Seattle after Wolford left early with a stinger.

After Goff had surgery on his broken right thumb Dec. 28, Wolford got the Rams' last two starts — even though Goff thought he was ready to play last week. But with Wolford still recovering this week, the decision essentially was taken out of McVay's hands, and Goff will return to the starting lineup in the Wisconsin cold against Green Bay's tough defense.

“I’m in a good place with it,” Goff said Thursday. “There’s a slight soreness, but nothing that’s hindering it in any way. Overall, it’s progressing the right way.”

Goff said his surgically repaired thumb has two screws in it that will be there “until I’m 6 feet under,” but he still felt healthy enough to resume his starting job last week in Seattle. McVay instead decided early in the week that Wolford would start, although he didn't announce his decision until shortly before kickoff.

Goff said his disappointment didn't create a problem between him and McVay.

“We are able to disagree,” Goff said. “We’re two grown men who disagreed on the status of my thumb, and it’s not the end of the world. Getting the win is most important to me. He’s the head coach, he has to make that decision, and at the end of the day, it was last week. We’re moving on. ... That’s something we talk about a lot here: where communication lacks, negativity fills. So continue to communicate. Continue to tell each other how you feel."

Goff led the Rams to victory in Seattle, but did it while completing just nine passes for 155 yards. He has thrown for 300 yards just once in his last six games since Thanksgiving, struggling along with the rest of LA’s offense down the stretch of a season in which he committed 17 turnovers in 15 games.

Goff has tried wearing gloves this week in practice in sunny Ventura County, but he hasn’t decided whether he’ll wear them on game day to help with his grip. Temperatures are expected to be in the 30s at kickoff at Lambeau Field.

“He’s been able to get a lot of good individual work,” McVay said of Goff’s health. “He’s making good progress. The further you get away from that, the more normal — I know he’s been pain-free, but I think the more functionality and feeling like yourself.”

Wolford will still travel to Green Bay with the Rams, but he won’t play. Veteran Blake Bortles, who returned to the Rams in Week 17 after Goff’s injury, will be Goff’s backup against the Packers, and rookie third quarterback Bryce Perkins also might be active.

Wolford left Seattle’s stadium in an ambulance with a neck stinger after a hit from the Seahawks’ Jamal Adams, and he hasn’t practiced this week. The unheralded second-year pro just took his first NFL snaps in the regular season finale, so his injury came at a particularly inopportune moment.

“I was extremely excited to have that chance in a big game up in Seattle,” Wolford said. “I really wanted to play that whole thing and really show what I had to offer. Just bad timing, but you take these things in stride, and I'll be ready for the next opportunity.”

NOTES: LT Andrew Whitworth went through a full practice Thursday, and he is expected to play in Green Bay. So is DT Aaron Donald, whose rib injury is not expected to force him to miss a game due to injury for the first time in his seven-year NFL career. ... WR Cooper Kupp is questionable with knee bursitis that kept him out of practice all week, and LG David Edwards also is questionable with an ankle injury. McVay said the Rams likely will wait until game day to make those decisions. ... Rookie LB Terrell Lewis is out with an ankle injury. The Alabama product missed eight regular season games due to various injuries, and he got just nine snaps last week in Seattle.