Jenkins' return has Packers feeling better about themselves 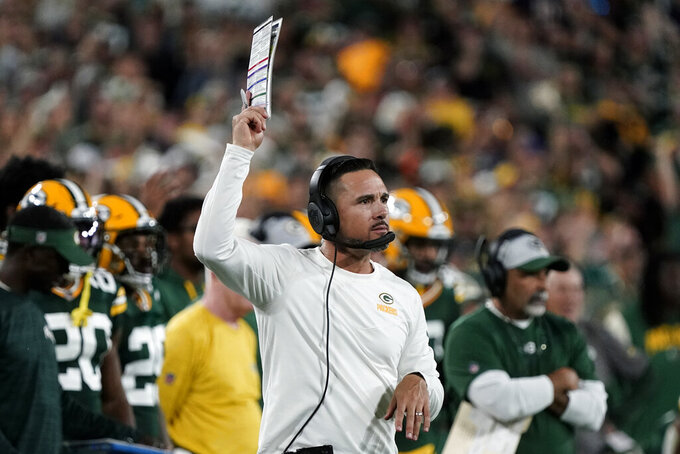 Green Bay Packers head coach Matt LaFleur reacts on the sideline during the second half of an NFL football game against the Chicago Bears Sunday, Sept. 18, 2022, in Green Bay, Wis. (AP Photo/Morry Gash)

“Basically just rusty,” Jenkins said Sunday night after playing his first game since last November. “I’ve got to get my technique right, get out of my stance, lock them up.”

Jenkins' teammates and coach were considerably more generous in their appraisal.

They marveled at how well he performed less than 10 months after tearing his left anterior cruciate ligament at Minnesota on Nov. 21. The versatile lineman started at right tackle and provided a major boost in the Packers’ 27-10 victory over the Chicago Bears.

Packers coach Matt LaFleur said Sunday night that “if he’s not in the lineup, we don’t win that game.” LaFleur went into more detail Monday.

“I thought there were certainly some plays that I’m sure he’d like to have back, but I thought he did an outstanding job, especially first time back out there,” LaFleur said. “I think it’s only going to get better and better and better.

The Packers’ season opener showcased the importance of Jenkins and David Bakhtiari, their injured left tackle. They were missing both players that day and struggled to move the ball in a 23-7 loss at Minnesota.

Bakhtiari was in the midst of an All-Pro season when he tore his left ACL on Dec. 31, 2020. He’s played in only one game since, though he has been practicing at least on a limited basis.

The Packers played virtually all of last season without Bakhtiari and much of the season without Jenkins and still finished 13-4. But their offensive line depth took a hit in the offseason with Billy Turner now in Denver and Lucas Patrick in Chicago.

Green Bay will have a tough time matching its success from the last few years and taking the next step unless both Jenkins and Bakhtiari play regularly.

Getting Jenkins back was a nice start, even if he didn’t believe he played his best. Green Bay’s line allowed three sacks but also paved the way for a 203-yard rushing attack.

“The definition of success isn’t always measured in stats,” quarterback Aaron Rodgers said. “And for Elgton, I thought tonight was an absolute success. I really do. He’s been out for a long time, and he’s battled in practice and he’s battled in his rehab and he went out there and played an NFL football game. That to me is a successful night.

“A lot of times we get caught up in a definition of success that’s never really attainable. So we live in this feedback loop of negative self-talk and self-criticism that I don’t think is good for a healthy ego or good for our own confidence. What I know the guys were telling him and what I feel about him is, that tonight was a huge success for Elgton. And I couldn’t be prouder of Elgton Jenkins.”

The Packers are averaging 5.6 yards per carry. ... Green Bay’s kickoff coverage unit performed well enough that the Bears didn’t start a single series from beyond their own 31-yard line. The Bears’ average starting field position was their own 21. ... Green Bay’s defense stopped Justin Fields on fourth-and-goal from inside the 1 to protect a 24-10 lead in the final period.

The Packers are also giving up 5.6 yards per carry. They allowed Chicago’s David Montgomery to rush for 122 yards on 15 attempts. ... Rodgers has been sacked seven times.

WR Sammy Watkins had three catches for 93 yards. Watkins had just one game the previous two years in which he accumulated that many yards (an eight-catch, 96-yard effort in the 2021 season opener with Baltimore). ... OLB Preston Smith recorded two sacks.

G Jason Hanson was removed from the starting lineup due to Jenkins’ return. Jenkins started at right tackle with Royce Newman shifting from tackle to guard and sending Hanson to the bench.

The Packers appeared to avoid any major injuries Sunday.

7 — LaFleur is the first coach to win each of his first seven matchups against the Bears. Minnesota's Dennis Green won his first six meetings with the Bears from 1992-94.

The Packers head to Tampa Bay and face the Buccaneers for the first time since losing to them twice during the 2020 season. The Packers lost 38-10 at Tampa Bay in the regular season and then fell to the eventual Super Bowl winners 31-26 in the NFC championship game at Lambeau Field.