Jets, Gase take positive step with win, but lots more to do 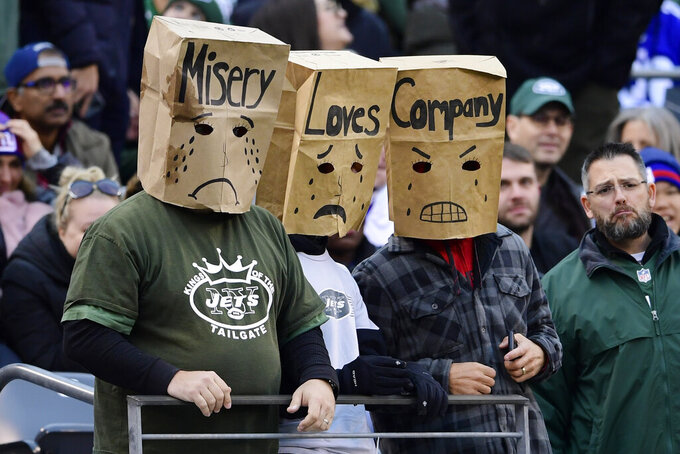 NEW YORK (AP) — Sam Darnold is well aware of all the frustrated fans out there, unhappy with the New York Jets' disappointing start and calling for Adam Gase's job.

A victory over the lowly Giants on Sunday might have tempered all the venom — for now.

But the Jets quarterback made it clear he supports his coach, and he's not alone.

"He's great. There's no flinch in him," Darnold said of Gase after the 34-27 win. "I think that kind of ripples throughout the team. When you've got a head coach that's just going to continue to work no matter what the circumstances are, no matter what people are saying about him, that's a really good thing."

Gase is 2-7 in his first season as coach of the Jets, and the team hit rock bottom last week after a loss to previously winless Miami — the team that fired him after last season.

Many Jets fans have taken to social media and sports radio to express their disgust, urging team chairman and CEO Christopher Johnson to make a coaching change just eight games in. One group even received enough donations to finance a banner that flew behind a plane over Manhattan earlier in the week with the simple message: "Fire Adam Gase Now."

For whatever Gase's shortcomings are perceived to be with his coaching — game planning, clock management, helping Darnold improve — there also has been a massive amount of injuries to key players and a lack of roster depth from the previous regime. It has all contributed to the struggles, and the Jets insist they can rise above it.

Some might say it was merely against the Giants, who are 2-8 and have a coach on an even warmer hot seat than Gase in Pat Shurmur.

Darnold declared after the game that if the Jets win the rest of their games, they will be squarely in the playoff picture.

The bottom line is this: It took just one win for the optimism to return from the abyss where it headed in a hurry. Gase and the Jets have a chance to really begin to turn things around — including public opinion — with another win Sunday.

"It's all going to be about Wednesday showing up, coming back to work, wiping the slate clean, just focusing on winning the next game and really preparing for the next game," Gase said. "If we're looking past anything besides that, we're in the wrong spot. We need to stay focused at the task at hand."

Run defense. The Jets held the Giants to just 23 yards rushing on 17 carries, highlighted by Saquon Barkley gaining a career-low 1 yard on 13 attempts. The 23 yards allowed were the fewest given up by the Jets since setting a franchise record by allowing only 11 at Baltimore in 2016. The Jets entered the weekend holding opponents to a league-low 3.13 yards rushing per attempt — an average that now sits at 3.0.

The cornerbacks. Trumaine Johnson is out for the season with injured ankles, and Darryl Roberts sat out Sunday with a calf issue. But even they struggled when they were healthy for a pass defense that ranks 26th in the league. Against the Giants, the Jets started Nate Hairston and Arthur Maulet and they also had problems, so much so that rookie Bless Austin — making his NFL debut — ended up playing for the benched Hairston in the second half. Brian Poole has been solid in his role at the nickel spot, but the only other cornerback on the active roster is Maurice Canady, who was claimed off waivers from Baltimore last week.

Jordan Jenkins. The outside linebacker had two sacks against the Giants, giving him a team-leading five in seven games this season. The Jets are tied for 25th in the NFL with 19 sacks, but Jenkins has provided a boost to their sagging pass rush lately.

Le'Veon Bell. There's no debate the star running back has said and done all the right things off the field this season in what has to be a downright frustrating first year in New York. But the numbers on the field look all wrong. After gaining just 34 yards on 18 carries — a 1.9 average — Bell has just 449 yards on the season with a 3.1 average, which would rank as the lowest of his career. The offense's overall struggles have taken a toll on everyone, but Bell is still waiting to have a breakout game.

Gase delivered the news Monday that tight end Chris Herndon has a broken rib and right guard Brian Winters has a dislocated shoulder, and both could miss the rest of the season. Herndon, expected to be a key part of the offense, made his season debut and had one catch for 7 yards. For Winters, it's the second time since training camp he has injured his shoulder.

0 — The number of interceptions Darnold threw against the Giants. That ended a streak of four straight games in which he was picked off, with nine INTs coming in that span.

The Jets will look to make it two in a row Sunday at Washington against the Redskins, who'll start Dwayne Haskins at quarterback for the rest of the season. It will mark the second rookie QB in a row New York will face.