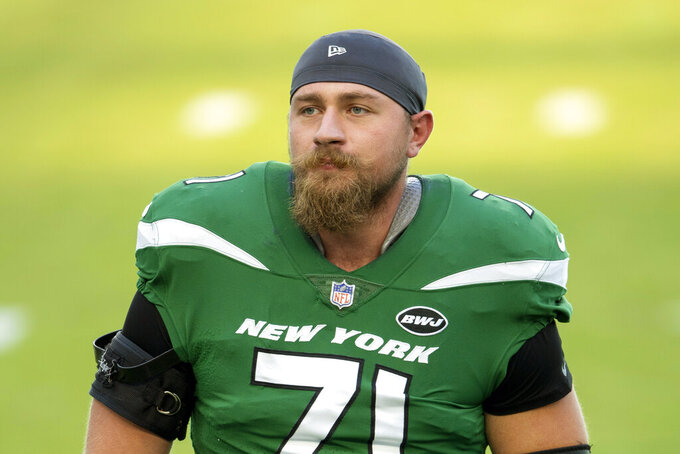 NEW YORK (AP) — The New York Jets placed guard Alex Lewis on the exempt/left squad list Friday, a day after he walked off the practice field with what coach Robert Saleh said was a head injury.

The 29-year-old Lewis was entering his third season with the Jets, who acquired him from Baltimore for a seventh-round draft pick in 2019. He started 12 games that season after taking over at left guard for the injured Kelechi Osemele. Lewis played well and was given a three-year, $18.6 million contract extension.

He started nine games last season before being placed on the reserve/non-football injury list. Lewis didn't play again after being designated to return in December. He took a pay cut in the offseason and was expected to be the backup at left guard after the Jets drafted Alijah Vera-Tucker with the No. 14 overall pick.

Vera-Tucker is dealing with a strained right pectoral, and Lewis had filled in the past two practices with the rookie sidelined. But Lewis came off the field midway through Friday's practice and headed inside the facility with a trainer.

Fant was New York's starter last season at right tackle, but could be looking at a backup role this season after the Jets signed Morgan Moses in late-June — although Saleh has insisted it will be a competition. With Fant sidelined, Moses has been working with the starters at right tackle, where he spent most of his seven seasons with Washington.

Fant was placed on the COVID list on July 27, when the Jets reported for training camp. He has been working with trainers during practice this week, and could practice for the first time this summer on Saturday night during the team's annual scrimmage at MetLife Stadium.

Robinson played in 13 games last season for Atlanta, where current Jets defensive coordinator Jeff Ulbrich served in the same role on an interim basis. This marks Robinson's second stint with New York after spending time with the Jets in 2017. He was a seventh-round pick in 2015 by Minnesota out of Newberry College, and has also been with Arizona and played in the Alliance of American Football and XFL.

Cole was claimed off waivers from San Francisco in May.