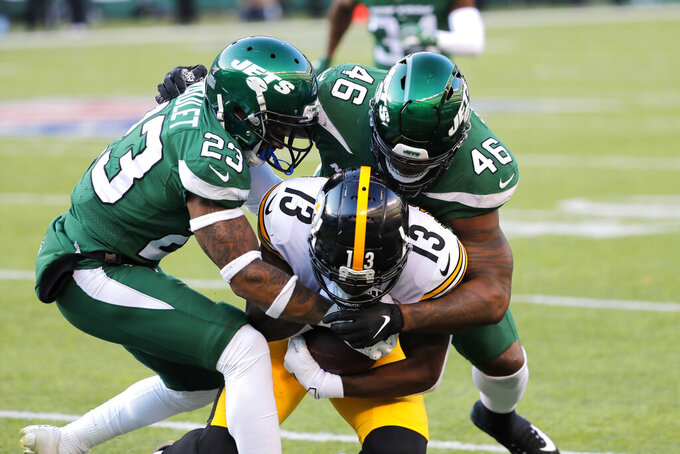 FILE - In this Sunday, Dec. 22, 2019 file photo, Pittsburgh Steelers wide receiver James Washington (13) runs with the ball as New York Jets cornerback Arthur Maulet (23) and New York Jets linebacker Neville Hewitt (46) try to stop him in the second half of an NFL football game in East Rutherford, N.J. The New York Jets are bringing back linebacker Neville Hewitt and cornerback Arthur Maulet, both of whom filled in as solid starters last season after injuries to other players, Friday, March 20, 2020.(AP Photo/Seth Wenig, File)

NEW YORK (AP) — The New York Jets are bringing back linebacker Neville Hewitt and cornerback Arthur Maulet, both of whom filled in as solid starters last season after injuries to other players.

Hewitt is re-signing on a one-year deal worth $2 million, agent Drew Rosenhaus told The Associated Press on Friday.

Maulet was a pleasant surprise while starting six games late last season after injuries decimated the cornerback spot. He finished with 41 overall tackles, an interception and two passes defensed. Maulet also recovered a fumble for a touchdown on special teams.

The Louisiana native was signed by New Orleans as an undrafted free agent out of Memphis in 2017. He had two stints with the Saints and also spent time with Indianapolis before being signed by the Jets last winter. Maulet became a free agent earlier this week when he wasn’t given a restricted free agent tender, but was brought back by New York.