Jones lives up to hype in Giants debut as quarterback 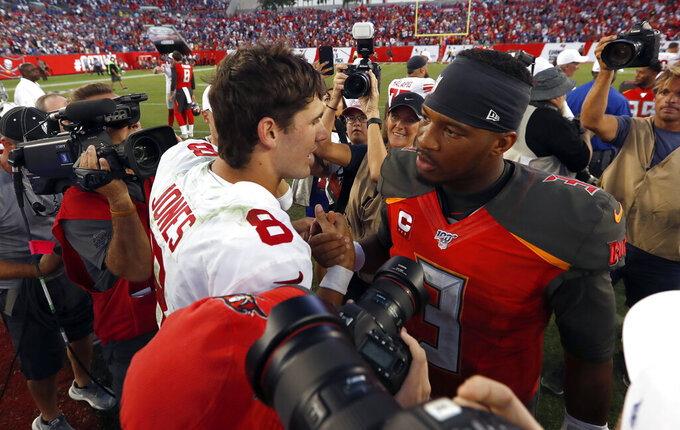 EAST RUTHERFORD, N.J. (AP) — The New York Yankees are getting ready for the playoffs. The Mets are trying to squeeze into a wild-card spot. The Rangers and Devils are building toward starting a new season.

The injury-ravaged Jets were disappointing in a loss to the Super Bowl champion Patriots. And there was, of course, the ankle injury to 2018 NFL Offensive Rookie of the Year Saquon Barkley.

It was a great lineup of sports stories for the Big Apple.

Yet, there was only one story in the metropolitan area Monday. It was rookie quarterback Daniel Jones of the New York Giants, Barkley's teammate.

The mild-mannered kid from Duke stole the headlines after replacing Eli Manning as the starting quarterback and rallying the Giants from an 18-point deficit to a 32-31 win over the Tampa Bay Bucs on Sunday.

It was the much-needed CPR on a season that was quickly expiring after bad losses to Dallas and Buffalo in the first two games.

The sixth pick overall in the NFL draft, Jones revived the season by hitting 23 of 36 passes for 336 yards and two touchdowns and a 2-point conversion pass. He also ran for two TDs, including the winner from 7 yards on a fourth-down scramble with 1:16 to play.

Like his nickname "Danny Dimes," the passes were right on the money, especially his 7-yard scoring strike to Sterling Shepard in the corner of the end zone in the third quarter.

He was fearless, standing in the pocket and taking hits. He was sacked five times and lost two fumbles. But he also used his mobility to extend plays, something Manning was unable to do at 38 years of age

"I thought we showed a lot of fight and we battled back after kind of creating a hole for ourselves there in the first half," Jones said after the game. "Exciting win and I look forward to building off of it."

It was everything Manning would have said. The difference is Jones has wheels and can run an offense with a run-pass option, the norm for the NFL these days.

While Manning didn't play, he was on the sideline to help Jones.

"He was very involved, the way I would expect any backup to be," Shurmur said Monday of Manning. "He was there and we all were there in support of Daniel, trying to give him the right plays and right advice. It was a good situation for Daniel. Imagine being in your first start and sitting next to a guy that has done it for 15 years and at a very high level. It has to be very reassuring for Dan."

When the game was over, you could see Manning mouth the words "good job" into the rookie's ear on the field.

The win was manna for the Giants, a team that has lost its way since winning Super Bowls after the 2007 and '11 seasons behind Easy Eli. They have made the playoffs once since 2011 and won eight games combined in the last two seasons.

This win snapped a five-game losing streak dating to last season and renewed hope the team was back on track.

"It's definitely very motivating, but at the same time, we understand that we can be even better," said tight end Evan Engram, who ignited the comeback by taking a short pass over the middle from Jones and going 75 yards for a touchdown on the opening series of the second half.

"It's definitely a good first step in the right direction," Engram added Monday. "It's important we enjoy it and build off of it, but there were some mistakes and some things that we can fix to put us in an even better spot. It definitely gives us some life and gives us some motivation moving forward."

"DJ came in, did a good job, did what he was supposed to do, gave us a chance to win," Bethea said. "At the end, as everybody saw, he was able to run it in. He definitely gave the offense a spark, gave the team a spark. Hopefully we can just build off of that and rally off that energy for these upcoming weeks."

Shurmur wasn't second guessing himself on Monday when asked if he should have given Jones the starting job earlier.

"I feel like I did what I thought was best," Shurmur said. "At least in this scenario, it played out well for Daniel. He had a good performance the first week out."

It starts again on Sunday at home against Washington.