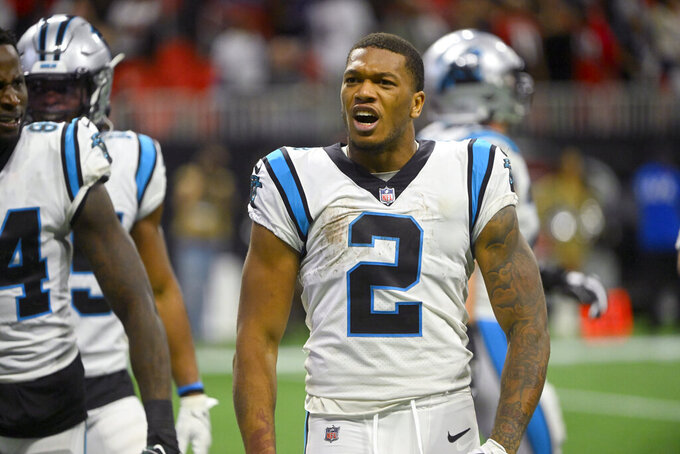 Carolina Panthers wide receiver DJ Moore removes his helmet after catching a touchdown pass during the second half of an NFL football game against the Atlanta Falcons Sunday, Oct. 30, 2022, in Atlanta. Moore was charged with a 15-yard unsportsmanlike penalty for removing his helmet on the play. (AP Photo/John Amis)

ATLANTA (AP) — D.J. Moore hauled in a last-minute touchdown pass but ripped off his helmet, Carolina's Eddy Piñeiro missed a pair of potential winning kicks, and the Atlanta Falcons escaped with a victory that was as improbable as their spot in the standings.

Younghoe Koo booted a 41-yard field goal in overtime after a silly penalty by Moore opened the door for the Falcons to pull off a 37-34 victory Sunday that maintained their hold on the NFC South lead.

"Our guys don't blink," said Marcus Mariota, who got a chance on his 29th birthday to make up for an interception that could've — should've, really — sent his team to a loss.

It will surely be the favorite gift he gets this year.

The teams combined for three touchdowns in the final 3:06 of regulation. But it looked like the Panthers would prevail in stunning fashion when Moore hauled in a 62-yard scoring heave from P.J. Walker with 12 seconds remaining, tying the game at 34 with only an extra point needed to win it.

But Moore yanked off his helmet during a raucous celebration in the end zone, resulting in a 15-yard unsportsmanlike conduct penalty.

“I’ve got to understand that there’s still time on the clock,” Moore said. “It was a natural reaction, but you’ve still got to know you can’t do that.”

Moore's blunder pushed back the PAT to a 48-yard attempt, and Piñeiro pulled it left of the upright.

Carolina had another chance to win in OT after C.J. Henderson returned an interception 54 yards to the Falcons 20. But Piñeiro botched another kick, yanking a wobbler left again from 32 yards out — shorter than a regular extra point.

“I just missed the kick,” Piñeiro said. “I’ve got to make the kick. It hurts. You know, I love this team and I know they’ve got my back and I know it’s not going to define me as a kicker. Everybody misses kicks. Unfortunately mine was today.”

Piñeiro and the Panthers wouldn't get a third shot.

Mariota, who threw three touchdown passes, ripped off a 30-yard run for the Falcons (4-4) that set up Koo's game-winner with 1:55 left in the extra period.

“He's a resilient guy,” Falcons coach Arthur Smith said when asked about Mariota's big run. “That's why we believe in Marcus. There's not many guys who can make that play."

Koo was carried off the field on the shoulders of his teammates. Moore — who finished with six catches for 152 yards — sat alone on the bench, staring in disbelief at a celebration that surely would've belonged to the Panthers (2-6) if he had merely kept his headgear buckled up.

"What would’ve happened if I didn’t take my helmet off?” Moore pondered to himself.

The Panthers had a chance to create a four-team logjam in the NFC South. Instead, the Falcons have the lead all to themselves with a .500 record.

Mariota was 20 of 28 for 253 yards with a pair of interceptions, his first coming on the second play of the game.

But he was awfully good between those picks, completing 12 straight passes at one point.

In the end, Mariota used his legs to burst from the pocket, veer toward the sideline and finish off the big run that would finally end the game.

The Panthers wasted a three-touchdown performance by D'Onta Foreman, a career best from a guy who filled in brilliantly for injured running back Chuba Hubbard.

Mariota and the Falcons needed less than a minute to go back in front. Damiere Byrd hauled in a pass around the 32, looped across the field and found a lane for a 47-yard TD with 2:14 on the clock.

The Panthers went out on downs, and the Falcons padded the lead on Koo's 36-yard field goal with 34 seconds remaining.

Enough time, it turned out, for the Panthers to score a touchdown. Moore ran right by Dean Marlowe, taking a more prominent role in the Falcons' injury-depleted secondary, and hauled in Walker's impressive heave for what appeared to be the winning score.

Walker got his third straight start for the Panthers, with former starter Baker Mayfield as his backup. He probably did enough to hang on to the job for another week.

Walker was 19 of 36 for a career-best 317 yards, with an interception under pressure that Lorenzo Carter returned for an Atlanta touchdown and that long scoring pass to Moore.

Panthers: S Juston Burris went out with a concussion. ... CB Donte Jackson sustained an ankle injury late in the game.

Falcons: Already short-handed in the secondary, Atlanta got a scare when cornerback Cornell Armstrong wobbled off the field midway through the third quarter. But he missed only a couple of plays before returning.

Panthers: Hit the road again next Sunday to face the Cincinnati Bengals.