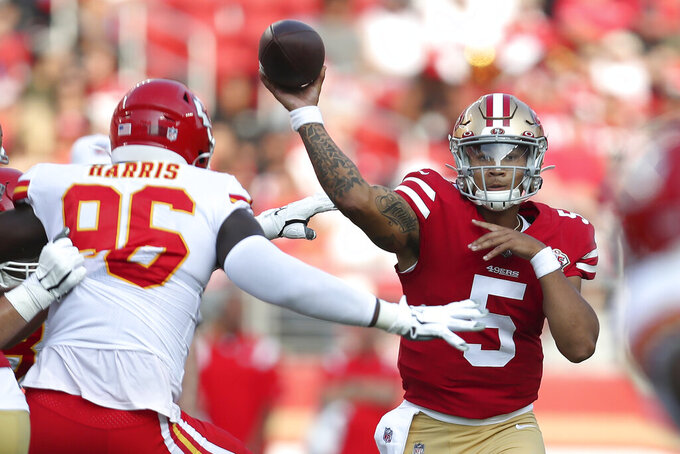 FILE - In this Aug. 14, 2021, file photo, San Francisco 49ers quarterback Trey Lance (5) throws a pass as Kansas City Chiefs defensive end Demone Harris (96) pressures during the first half of an NFL preseason football game in Santa Clara, Calif. Switching personnel mid-drive is commonplace in the NFL with running backs shuttling in and out and teams switching from three-receiver sets to two-receiver formations all the time. The 49ers could do it at quarterback this season with Jimmy Garoppolo and rookie Trey Lance sharing time. (AP Photo/Jed Jacobsohn, File)

SANTA CLARA, Calif. (AP) — Rookie quarterback Trey Lance made it through a week of practice with no setbacks to his injured right index finger and is cleared to play in the San Francisco 49ers’ season-opener at Detroit.

Lance suffered a small chip fracture in the index finger on his throwing hand in the exhibition finale on Aug. 29. He missed about a week of practice before returning Wednesday. He was limited the past three days but has been able to throw and take snaps and has no injury designation for the game Sunday.

He is expected to be available if coach Kyle Shanahan opts to use him in a situational package to complement starter Jimmy Garoppolo.

The Lions will be without a key player of their own with left tackle Taylor Decker ruled out for Sunday with a finger injury. Decker injured himself pass blocking in practice and will likely need surgery.

“It was just in a pass protection,” coach Dan Campbell said. “He threw the punch, threw the hand and the injury took place. It’s more on the finger."

Decker has started all but one game at left tackle the past three seasons. The Lions could move first-round rookie Penei Sewell over from right tackle to fill that spot protecting Jared Goff's blind side against a defensive line led by 2019 Defensive Rookie of the Year Nick Bosa.

“If that’s where we ended up going with it, that’s what he did play in college and it’s something he’s comfortable with," Campbell said. “But he’s also getting pretty comfortable at right. So, that’s what we’re going to need to – it’s that fine balance between, who do you feel like is best to move to the left side versus, he’s a rookie and he’s getting better on the right side and let’s keep him there knowing that Decker will be back in a little bit.”

The other likely options at tackle for Detroit are Matt Nelson or moving Halapoulivaati Vaitai from guard to tackle and playing Logan Stenberg at guard.

The Niners will be without receiver Jalen Hurd, who is expected to go on injured reserve for the third straight season with a knee injury.

Defensive tackle Javon Kinlaw (knee) and cornerback Emmanuel Moseley (knee) are both doubtful, which could force San Francisco to scramble a bit on defense.

While the Niners have depth at defensive line with Kentavius Street, Zach Kerr and Kevin Givens able to step in, the situation at cornerback is less certain if Moseley can't start.

Veteran Josh Norman was signed earlier this week and is working his way into shape after missing all of training camp.

San Francisco also has rookies Ambry Thomas and Deommodore Lenoir, or could choose to promote Dontae Johnson from the practice squad for the game.