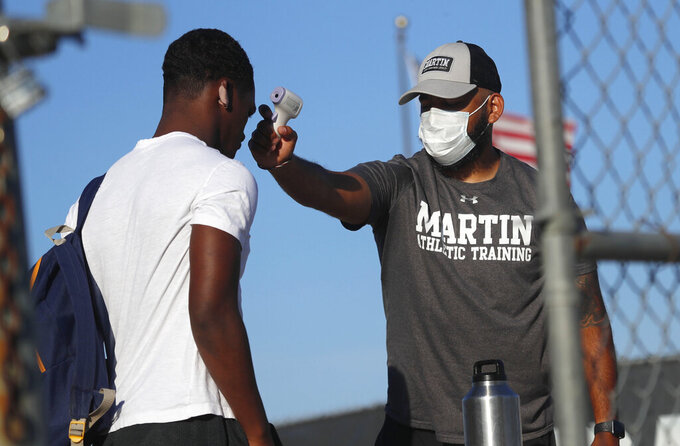 Before entering the field gates for football strength and conditioning camp at Arlington Martin High School, athletic Trainer Joey Pena, right, uses a thermometer on the forehead of sophomore running back Gervawn Neville for a temperature check Thursday, June 18, 2020, in Arlington, Texas. While states have been easing the economic and social lockdowns prompted by the coronavirus pandemic, some are now letting high school athletes return for summer workouts before teachers have even figured out how they are going to hold classroom instruction. (AP Photo/LM Otero)

A second member of the Tennessee men’s basketball team has tested positive for COVID-19 and is in isolation.

The Twin Cities Marathon will be held virtually due to COVID-19 restrictions in Minnesota, the latest road race altered, postponed or canceled by the pandemic.

Twin Cities in Motion, the marathon’s organization, said Tuesday that the 39th edition of the event will not be staged as usual on Oct. 4 in Minneapolis and St. Paul. Registered runners instead can run any 26.2-mile distance during the month of October and submit their times online to receive the finisher T-shirt and medal. The Boston Marathon recently announced a similar, crowd-free format.

The Twin Cities Marathon had more than 8,000 entrants last year, with 6,700 finishers. An estimated 300,000 spectators annually line the course. The weekend roster of races that includes the marathon and several shorter-distance events was expected to draw as many as 30,000 runners.

Monmouth Park will reopen for simulcast wagering and sports betting on July 2, with live horse racing returning the following day.

The complex will operate at 25% capacity as part of New Jersey’s second stage of loosening of restrictions to slow the spread of the coronavirus. The racetrack has been closed to the public since March 16 because of the pandemic.

“We know our fans are as eager to return to Monmouth Park as we are to have them back,” said Dennis Drazin, chairman and CEO of Darby Development LLC, which runs the track.

The 37-day meet runs through Sept. 27, highlighted by the $1 million Haskell Invitational on July 18.

Pittsburgh is out of the running to be one of the two hubs for the NHL when the league resumes its season amid the COVID-19 pandemic.

The Penguins submitted what the club called an “aggressive” bid to be a hub city and was among the 10 finalists — including seven in the U.S. — announced by NHL Commissioner Gary Bettman. They announced Tuesday they weren’t selected, joining the Columbus Blue Jackets.

Penguins President and CEO David Morehouse said simply being a finalist reflected the city’s support of the team and the NHL.

The Penguins are among 24 teams that are in Phase 2 of the league’s Return to Play program, which consists of small group workouts without coaches. Those 24 teams will eventually be part of an expanded playoff format, with 12 teams committed to each of the two host cities.

Maine’s Bowdoin College and UMass Boston are canceling their fall sports schedules due to the COVID-19 pandemic.

Bowdoin President Clayton Rose cited limitations on campus attendance in an announcement detailing the school’s plans for the fall semester. UMass Boston interim Chancellor Katherine Newman said in a memo that the school will focus on remote instruction in the fall with no on-ground student activities.

Both schools compete in Division III. Bowdoin has 31 varsity teams. UMass Boston has 18.

Rose said there may be an opportunity for the winter, spring and possibly fall athletes to participate and compete in some form after Jan. 1. But there will be no elimination of programs or furloughs or cuts to athletic administration, staff or coaches.

Newman said she is hopeful conditions will improve enough by October that the school will be able to open some on-campus programs.

Tomlin said Tuesday the players tested positive at some point earlier this year. Both players went through what Tomlin called “the appropriate protocol” and have since returned to work.

Neither player visited the team facility at any point during the offseason. The Steelers, like the rest of the NFL, have been meeting and training remotely rather than in person since mid-March.

The U.S. National Soccer Hall of Fame has postponed its 2020 induction ceremony to 2021 because of the COVID-19 pandemic.

This year’s induction ceremony had been scheduled for Sept. 19-20 in Frisco, Texas, where the Hall of Fame is located.

Members of the 2020 and 2021 classes will be inducted together in a ceremony next year.

Voting for the 2020 class was completed earlier this year but not yet announced.

This year’s karate world championships have been postponed for one year because of the coronavirus pandemic.

The governing body says “the well-being and safety of competitors and fans could not be ensured amid the ongoing epidemic of COVID-19.”

Karate was set to make its debut at the 2020 Olympics in Tokyo but that event has also been postponed by a year.

The karate worlds are held every two years. The scheduled 2022 event has also been put back one year to 2023 in Budapest, Hungary.

Another tennis player has tested positive for the coronavirus after taking part in an exhibition series organized by Novak Djokovic in Serbia and Croatia.

Viktor Troicki says he and his pregnant wife have both been diagnosed with the virus. The former top-20 player from Serbia played against Djokovic in Belgrade during the first part of the two-leg tour.

Djokovic was the face behind the Adria Tour. The series started in the Serbian capital and then moved to Zadar, Croatia, last weekend.

There were no social distancing measures observed at the matches in either country.

Djokovic left Croatia after the final was canceled and was tested in Belgrade. The results are expected soon.