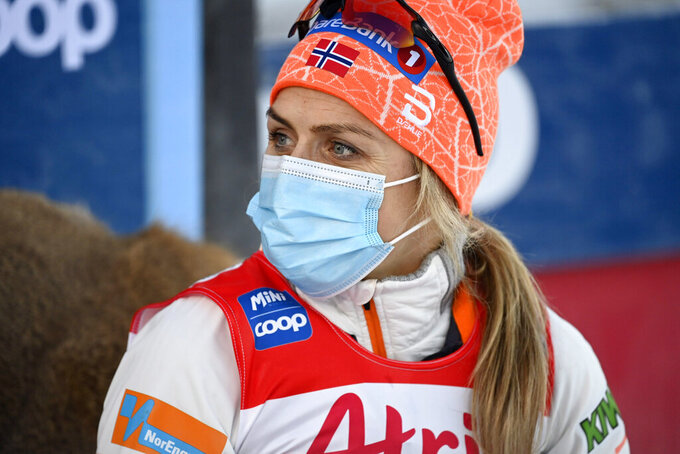 The Mountain West said the game would not be rescheduled and the decision was made after guidance from medical personnel and epidemiologists.

It’s the second straight cancellation for Boise State. It’s game against San Jose State last Saturday was called off just a few hours before kickoff after nine players were ruled out due to positive COVID-19 tests or contact tracing that left the Broncos lacking depth at specific positions.

The Las Vegas Bowl has been canceled because of the ongoing coronavirus pandemic.

Executive director John Saccenti says it was a difficult decision but the right one considering the game was founded to help drive tourism to the gambling mecca.

The game was slated to be the first bowl game played in Allegiant Stadium and was to feature a new matchup between the Pac-12 Conference and Southeastern Conference as part of a rotating cycle that also includes the Big Ten.

Vanderbilt has canceled its men’s basketball game at SMU on Tuesday, extending its pause on activities.

The Commodores announced the cancellation Wednesday night, two days after pausing activities and withdrawing from a pair of games in Connecticut due to a positive test within its program

Purdue Fort Wayne men’s basketball team has suspended activities and canceled games for the next two weeks because of positive COVID-19 tests within the program.

The team canceled Thursday’s game with Adrian, Saturday’s game at Dayton and games against Defiance on Dec. 12 and 13.

The program said it will “resume activity in accordance with the university and athletic department’s established protocols.”

The next scheduled game is Dec. 19 against Indiana University–Purdue University Indianapolis.

The U.S. Tennis Association has canceled its National Winter Championships in Arizona and Florida because of the coronavirus pandemic.

The youth tournaments were supposed to run from Dec. 28 to Jan. 3.

The USTA said Wednesday that it took into account recent CDC recommendations to limit interstate travel and problems created by different quarantine and health regulations across states and regions around the country.

The singles and doubles championships for boys and girls in the 12s and 14s age categories were supposed to be played in Tucson, while the 16s and 18s categories were scheduled for Orlando.

Conference USA has announced a change to this weekend’s football schedule.

WKU at Charlotte, which had been previously scheduled to be played on Dec. 1, has been re-scheduled for Sunday at noon at Richardson Stadium.

Along with this schedule addition, the FIU at Charlotte game that was scheduled for Saturday has been canceled.

A final determination of the matchups for the last weekend of the regular season, Dec. 10-12, will be made by Sunday.

Barnes has missed three straight games since getting placed on that list Nov. 6. The reserve/COVID-19 list is for players who either test positive or have close contact with an infected person.

The undrafted free agent from UCLA has 48 tackles.

The Daytona 500 will have limited spectators for NASCAR’s season-opening race on Feb. 14.

Daytona International Speedway did not specify Wednesday how many spectators will be admitted into “The Great American Race."

Daytona said it will work to accommodate guests who have already purchased tickets to the race. To ensure social distancing between groups who will be in attendance, many fans will be reseated in new locations. The reseating process is expected to be complete by early January.

All guests will be screened before entering the facility and will be required to wear face coverings while maintaining six feet social distancing throughout their visit.

Middle Tennessee has canceled Sunday’s home football game with UAB because of COVID-19, contact tracing and injuries inside the Blue Raiders’ program.

This is the second straight week Middle Tennessee has canceled a game. Athletic director Chris Massaro says they're down to 49 scholarship players and would’ve been forced to play some players coming off injuries. Massaro says that’s not a situation they wanted to put those players in.

Middle Tennessee canceled its home game with FAU scheduled for last weekend a day before the game due to COVID-19 testing, tracing and injuries.

This is the third game this season postponed or canceled for the Blue Raiders (3-6). Their game Nov. 7 at Charlotte was postponed due to COVID-19 issues within the 49ers’ program.

Massaro says it’s disappointing but an unfortunate outcome of the pandemic.

Michigan’s football game this weekend against Maryland has been canceled, and the Wolverines are pausing practice until Monday.

Michigan says the decision to pause in-person football activities was made in consultation with medical professionals. The team did not meet in person the previous two days after coach Jim Harbaugh said there had been an increased number of presumptive positive COVID-19 tests.

“The decision by our medical professionals to stop practices and cancel this Saturday’s game against Maryland was made with the health, safety and welfare of the student-athletes, coaches and staff as our utmost priority,” athletic director Warde Manuel said. “We have seen an increase in the number of student-athletes unavailable to compete due to positive tests and associated contact tracing due to our most recent antigen and PCR testing results.”

Michigan is 0-3 at home this season, and the Maryland game was the last scheduled home game. The Wolverines are scheduled to play at rival Ohio State on Dec. 12.

Mississippi has suspended team activities in football during the Rebels’ open date.

Coach Lane Kiffin said the pause came Wednesday morning after COVID-19 test results came back. He says the team would wait on results from Wednesday’s retesting and could return to the practice field after as little as a one-day hiatus.

The Rebels are off this week after the SEC shuffled the schedule. They still have games to make up against Texas A&M and LSU.

“We’d be able to play as of right now, with no more” positive tests, Kiffin said.

Wisconsin says its Dec. 8 women’s basketball home game with Prairie View A&M has been canceled due to protocols related to COVID-19.

The Badgers’ Big Ten opener Saturday at Iowa remains on as scheduled.

This marks the second Wisconsin women’s basketball game to get postponed or canceled due to the pandemic. Wisconsin postponed its Nov. 25 opener with Miami (Ohio) and instead began the season Sunday with a 73-66 victory over Western Illinois.

Kent State’s football game at Miami (Ohio) scheduled for Saturday has been canceled due to positive COVID-19 tests within the Golden Flashes’ program.

The Mid-American Conference issued a statement saying the game has been declared a no contest.

It’s the second cancellation for Miami, which had its Nov. 17 game against Ohio wiped out.

Kent State said the cancellation was “made out of an abundance of caution in consultation with university leaders and medical professionals, with the safety and well-being of our student-athletes and staff as our first priority.”

Kent State’s next scheduled game is against Ohio on Dec. 12.

George Mason has called off its men’s basketball game at Maryland scheduled for Friday because of what the Virginia school says is a positive COVID-19 test within the program.

George Mason announced Wednesday that its team “temporarily paused activities” after the result showed up during routine testing, which happens three times a week.

The Terps announced they're hosting St. Peter’s on Friday instead. Maryland is 3-0 this season.

The Cleveland Browns are dealing with another COVID-19 case after an unidentified staff member tested positive.

The team closed its facility Wednesday to conduct contact tracing, which has become routine the past two weeks because of several other positive tests. The Browns are expected to practice indoors after heavy snow in the area.

On Tuesday, the team activated star defensive end Myles Garrett from the reserve/COVID-19 list and expect him to practice as it gets ready to play at Tennessee on Sunday. Garrett missed two games after becoming infected.

Fullback Andy Janovich is also back following a stint on the COVID-19 list.

The final scheduled World Cup ski races used to test the 2022 Olympic downhill course have been canceled by the Chinese ski federation.

The International Ski Federation says it has been told by the Chinese federation that the women’s downhill and super-G races scheduled for Feb. 27-28 in Yanqing will not take place because of the coronavirus pandemic.

FIS says says it expects to confirm the cancellation within days.

Men’s World Cup races on the Olympic hill were canceled in February. Those were among the first international sports events to be called off as infections spread from China.

Fiorentina coach Cesare Prandelli has tested positive for the coronavirus.

The Italian club says Prandelli is self-isolating and that the rest of the squad will now go into a “bubble” in accordance with protocol.

The 63-year-old Prandelli is in his second spell at Fiorentina and has been in charge for less than a month. He replaced Giuseppe Iachini.

Fiorentina has lost both of its league matches under the former Italy coach.