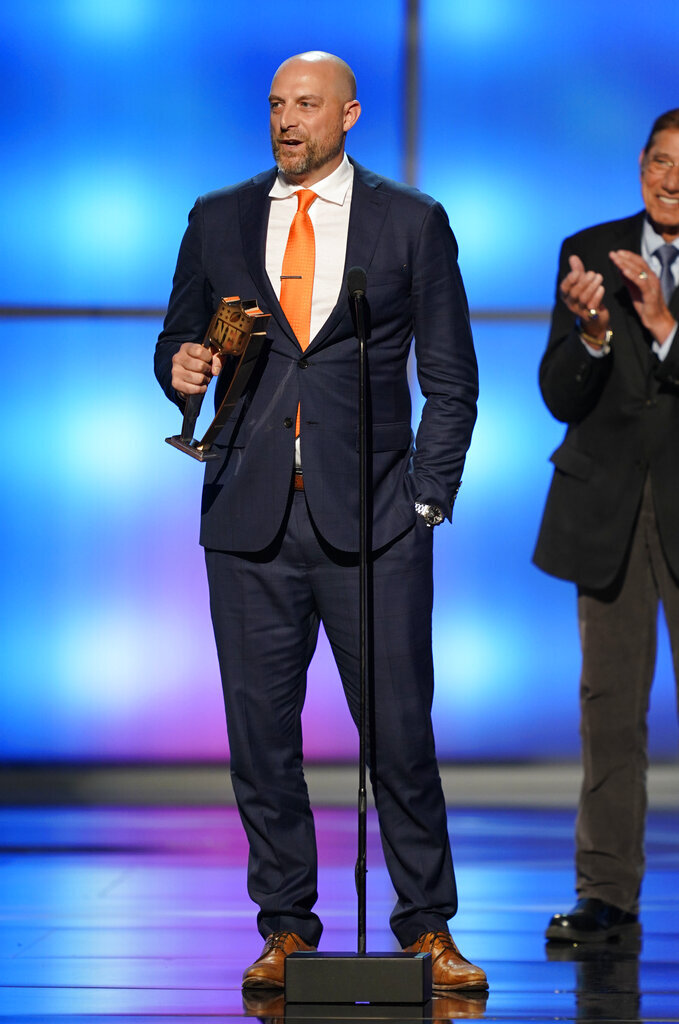 Coach of the Chicago Bears Matt Nagy accepts the award for AP coach of the year at the 8th Annual NFL Honors at The Fox Theatre on Saturday, Feb. 2, 2019, in Atlanta. (Photo by Paul Abell/Invision for NFL/AP Images) 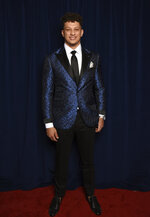 It was a Patrick Mahomes runaway for NFL MVP.

In his second pro season, Kansas City Chiefs quarterback Patrick Mahomes took The Associated Press 2018 NFL Most Valuable Player award. He received 41 votes from a nationwide panel of media members who regularly cover the league. New Orleans quarterback Drew Brees got the other nine in balloting announced at NFL Honors.

With only one previous start, Mahomes entered the season as something of a curiosity in Kansas City after the Chiefs traded veteran Alex Smith to open up the job. It didn't take long to erase any doubts as Mahomes led the Chiefs to their first AFC title game since the 1993 season, throwing for 50 touchdowns, 5,097 yards and had a 113.8 QB rating, trailing only Brees.

Mahomes' creativity — the guy can throw from all angles and make plays inside and outside the pocket — energized the Chiefs' fan base and excited fans across the league.

"The play is never dead. He can find new ways to get you the ball," Chiefs All-Pro tight end Travis Kelce said. "It may look like a screwball, a slider here or there, but it'll get to you eventually."

Mahomes is the sixth straight quarterback and 11th of the last 12 years to win MVP. No Kansas City player had won the award since the Chiefs joined the NFL in 1970.

No team had a better draft last April than Indianapolis. A huge portion of the proof was linebacker Darius Leonard.

The second-round pick out of South Carolina State is The Associated Press 2018 NFL Defensive Rookie of the Year. Leonard, who led the Colts in tackles with a franchise-record 163, added 13 in a playoff victory over Houston, and made the All-Pro team. He earned 29 votes from a nationwide panel of media members who regularly cover the league, nine in front of Chargers safety Derwin James.

Denver DE Bradley Chubb got the other vote in balloting announced at NFL Honors. Both James and Chubb was selected in the first 17 picks, while Leonard went 36th.

A dominant performer at an FCS school, Leonard impressed general manager Chris Ballard when Leonard made 19 tackles against eventual national champion Clemson in 2016. Leonard simply got better in college, and throughout his pro debut. He had seven sacks, six forced fumbles and two interceptions despite missing one game with a knee injury.

Indianapolis had another rookie All-Pro in guard Quenton Nelson, its opening-round draft pick.

For the second consecutive year, Aaron Donald is The Associated Press NFL Defensive Player of the Year.

In a two-man race that wasn't much of a contest, the defensive tackle who will lead the Los Angeles Rams into the Super Bowl against New England earned 45 votes from a nationwide panel of media members who regularly cover the league. The only unanimous member of the 2018 All-Pro team, Donald easily outdistanced Chicago edge rusher Khalil Mack, also an All-Pro who received five votes in balloting announced night at NFL Honors.

Donald, the only Rams player selected for the top defensive honor, joins Lawrence Taylor and J.J. Watt as players to win the award in back-to-back seasons. Donald led the NFL with 20 1-2 sacks.

"Any time you put a body of work into it and then it pays off," Donald said, "and you're rewarded for it, it means a lot. It's a blessing."

Andrew Luck is The Associated Press NFL Comeback Player of the Year in a landslide win over J.J. Watt.

The Indianapolis quarterback who missed the entire 2017 season with a shoulder injury, got 44 votes from a nationwide panel of media members who regularly cover the league. That far outpaced the four votes for Houston's All-Pro edge rusher Watt. Redskins running back Adrian Peterson received two votes in balloting announced at NFL Honors.

Luck's sensational return, in which he led the Colts to a 10-6 record, wild-card playoff berth and a victory at Houston, erased any doubts that the 2012 top overall draft choice could be a force in the NFL again. He was second in the league with 39 touchdown passes, throwing for 4,593 yards. He established career highs in completions, attempts and percentage and was sacked a league-low 18 times.

He's the first Indianapolis player to win the award.

In his first season as Chicago Bears coach, Matt Nagy has won the league's top honor for his profession.

Nagy is The Associated Press 2018 NFL Coach of the Year. For taking the perennial also-ran Bears to a 12-4 record and the NFC North championship, Nagy earned 24 votes from a nationwide panel of media members who regularly cover the league. That was well ahead of the Chargers' Anthony Lynn, who got 10 votes in balloting announced at NFL Honors.

Nagy has overseen the development of quarterback Mitchell Trubisky, who blossomed in his second pro season, and saw a defense befitting the "Monsters of the Midway" dominate opponents at times. He is the fifth Bears coach to win the award, joining team founder George Halas (1963, 1965), Mike Ditka (1985, 1988), Dick Jauron (2001) and Lovie Smith (2005).

In a year when many coaches did exceptional work, four others also received votes. The Colts' Frank Reich got eight, followed by the Chiefs Andy Reid (5), the Seahawks' Pete Carroll (2) and the Saints' Sean Payton (1).

Mahomes, who had started one game for the Chiefs before this season, threw for 50 touchdowns and 5,097 yards in leading the Chiefs to their first AFC championship game since the 1993 season. He received 30 votes from a nationwide panel of media members who regularly cover the league.

Mahomes also was an overwhelming choice as All-Pro quarterback in early January.

Saints quarterback Drew Brees, who led the NFL with a 115.7 rating, was second with 16 votes in balloting announced at NFL Honors. Houston All-Pro receiver DeAndre Hopkins got two votes, as did Rams All-Pro running back Todd Gurley.

Only one other Chief, running back Priest Holmes in 2002, has won the top offensive player award.

Saquon Barkley, described by some as a "generational running back," is The Associated Press 2018 NFL Offensive Rookie of the Year.

In a rarity, a guard, Indianapolis' Quenton Nelson, got two votes in balloting announced at NFL Honors.

Barkley also made a team-high 91 receptions for 721 yards, and his 2,028 yards from scrimmage led the NFL.

"This kid is a special player, a special talent," said Eagles coach Doug Pederson. "He's such a big, powerful guy thate has breakaway speed. Sometimes, it's impossible, but you kind of have to get two or three bodies on him. He's a tremendous running back, and a load to bring down."

Barkley is the second Giants player in five seasons to win the award; wide receiver Odell Beckham Jr., took it in 2014. They are the only Giants to win it.

For his work as defensive coordinator of the Chicago Bears, Vic Fangio got the head coaching gig in Denver.

He also won The Associated Press 2018 NFL Assistant Coach of the Year Award on Saturday.

Fangio guided the latest version of the "Monsters of the Midway" to a third-place ranking on defense and first against the run. He helped edge rusher Khalil Mack, cornerback Kyle Fuller and safety Eddie Jackson become All-Pros. Chicago allowed a league-low 283 points.

Soon after the Bears were eliminated in the wild-card round by the Eagles, Fangio was hired by the Broncos.

Fangio received 25 votes from a nationwide panel of media members who regularly cover the league. That was far ahead of Baltimore defensive coordinator Don Martindale, who got nine in balloting announced at NFL Honors.