The Latest: No. 15 Marshall postpones game vs Charlotte 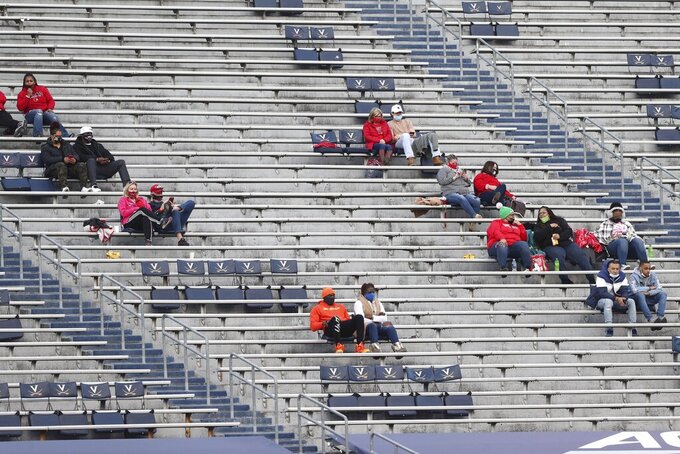 Marshall University’s athletic department says Saturday’s home football game between the No. 15 Thundering Herd and Charlotte has been canceled due to COVID-19 issues involving the 49ers.

The announcement Monday marks the third straight week and fifth time overall this season that Charlotte (2-3, 2-1 Conference USA) has had a game called off due to virus-related issues.

It marks the eighth contest called off for Marshall (7-0, 4-0) this season. Two of the postponements have been rescheduled for December while some slots were filled by new opponents.

Mississippi State has announced 25% seating capacity for men’s and women’s basketball games this season at Humphrey Coliseum in Starkville.

The governor’s most recent executive order determined capacity, and the school has designed a socially distanced seating plan with protocols from state, university and city health officials along with the Southeastern Conference and Center for Disease Control and Prevention. Spectators must wear a face covering, mask or face shield covering the nose and mouth except while eating or drinking.

The athletic department will also implement additional physical distancing to create clear separation between the court area and seating. Humphrey Coliseum will undergo temporary reseating under the plan and limit seats to four assigned at priority for each ticket account.

MSU students will remain in the lower bowl.

The Atlanta Braves will start selling single-game tickets this week for the 2021 season, though they’re offering refunds for games that can’t be played or have reduced capacity because of the coronavirus pandemic.

Major League Baseball played a shortened, 60-game regular season this year in which no fans were allowed in the ballpark.

Braves President and CEO Derek Schiller said “we look forward to welcoming fans back to Truist Park for the 2021 season and give them the chance to enjoy Braves baseball in person.”

The three-time defending NL East champions also announced a ticket guarantee policy because of the uncertainty caused by the pandemic, which has resulted in a dramatic spike of new cases across the nation in recent weeks. If any game is canceled because of the virus, or if fan capacity is restricted, the Braves will offer a full refund or credit.

“We know fans are eager to show their support for the team and we want to give them assurance with our ticket guarantee policy should there be any changes,” Schiller said. “We will continue to work closely with our health experts and update all health and safety measures as we make Truist Park a safe place to watch our games.”

A college football game between Louisiana Tech and Louisiana-Monroe that was scheduled for Saturday at Independence Stadium in Shreveport has been canceled because of COVID-19 concerns at ULM.

McDonald said following CDC and Sun Belt Conference protocols for positive tests and subsequent contact tracing made it clear there wasn't enough time to safely prepare for the game.

ULM head coach Matt Viator said his team will resume normal football activities this weekend and prepare for its home finale on Nov. 28 against Louisiana-Lafayette.

Oklahoma State made the announcement in a news release on Monday.

The program is pausing in-person activities.

“We won’t set an exact date for a return to team activities because of the uncertain nature of the virus,” Oklahoma State coach Jim Littell said. “Our focus is to make sure that everyone is well taken care of and to do our part to minimize the spread. We’ll figure out the rest later.”

The release said none of the players have reported severe symptoms and no one has been hospitalized.

For now, the team will meet virtually.

Organizers have canceled the Rock ‘n’ Roll Nashville marathon and half marathon that had been rescheduled for Saturday due to rising COVID-19 cases.

The event already had been rescheduled from April because of the pandemic. Organizers said they had health and safety measures in place to protect runners, staff and the public. But Tennessee reported a record 7,951 COVID-19 infections Monday along with a 13% positivity rate, also another high. That forced organizers to simply cancel the 2020 marathon and half marathon and hope to run again on April 24-25, 2021.

All three of the remaining games on No. 12 Miami’s schedule have been rescheduled because of issues with the coronavirus.

Miami was to play Georgia Tech at home Saturday; that game now may be played on Dec. 19, assuming that the Hurricanes are not in the Atlantic Coast Conference championship game that day and that the outcome of the game won’t have a direct impact on the ACC title-game matchup.

Miami’s trip to Wake Forest, scheduled for Nov. 28, is now set for Dec. 5. And the Hurricanes’ home game with North Carolina was also pushed back one week to Dec. 12.

Miami nearly postponed its trip to Virginia Tech this past weekend because of coronavirus issues including positive tests and other players unavailable because of potential exposure.

Louisville at Boston College, which was originally scheduled for Nov. 27, will also be played Dec. 12.

The Tennessee Titans have placed linebacker David Long on the reserve/COVID-19 list, and the team facility remains open based on the results of contact tracing.

The Titans announced Long was placed on the list Monday morning. Tennessee had the weekend off after losing 34-17 to Indianapolis on Nov. 12. Long went into self-isolation. The Titans say they are continuing to monitor the situation and are in close communication with the NFL.

The Titans had the first COVID-19 outbreak during this NFL season, which led to the postponement and rescheduling of two games in October.

Browns fullback Andy Janovich was placed on the reserve/COVID-19 list after Cleveland shut down its facility for the second time in four days due to another positive test.

Janovich played in Sunday’s home win over the Houston Texans. He joins offensive lineman Chris Hubbard on the COVID list, which was created for players who test positive or have been quarantined after close contact with an infected person.

Hubbard tested positive on Friday, and had to sit out against the Texans.

The Browns didn’t have a positive test for the first eight weeks of the season. But last week, the team first placed quarterback Baker Mayfield on the COVID list after he had contact with a staff member who tested positive.

Washington is joining the Baltimore Ravens and Philadelphia Eagles in not having fans at its next game, Sunday against the Cincinnati Bengals.

The team says in a statement it has been monitoring the virus situation with local and Maryland state authorities and “take the responsibility of protecting our staff, players, fans and the community seriously and feel this is the right decision at this time.”

Washington plays its home games in Landover, Maryland. It allowed 3,000 fans for its last home game.

The 49ers are on a bye this week and don’t play again until Nov. 29 against the Los Angeles Rams so it’s unclear if Armstead will miss any time.

The list is used for players who either test positive for COVID-19 or have been in close contact with someone who was infected. The team gave no other details.

Indiana State University has announced it will only allow players’ family members and essential personnel to attend the Sycamores home basketball games through December.

Butler University announced Sunday that the Marion County Department of Health approved a plan to use up to 25% of the Hinkle Fieldhouse capacity for the Bulldogs' home opener Nov. 25. Fans will be required to wear face coverings, undergo temperature checks, be socially distanced and must use specified gates to enter or exit the facility.

Season tickets will not be sold this year, but season-ticket holders will have the first option to purchase tickets in blocks of two to four games.

The Cleveland Browns have had a second yet-to-be-identified player test positive for COVID-19 and the team has closed its facility to conduct contact tracing.

The team was informed of the positive test Monday morning and sent out a statement moments before coach Kevin Stefanski was scheduled to meet with the media on a Zoom call. The team said the player immediately self-isolated.

Last Friday, the Browns closed its headquarters due to a positive test by offensive lineman Chris Hubbard, who was placed on the COVID list and missed Sunday’s win over Houston. It’s expected the second player will join Hubbard on the list.

Stefanski declined to say if the second player was on the field Sunday.

The Irish soccer association says two members of the national team have tested positive for the coronavirus after playing in a Nations League qualifying match against Wales.

Tottenham defender Matt Doherty and Stoke winger James McClean have been isolated from the rest of the Ireland squad that flew back to Dublin from Cardiff. Ireland lost 1-0 in the Welsh capital on Sunday.

Midfielder Alan Browne tested positive for COVID-19 following the team’s 3-0 loss to England on Thursday. He played in that game along with Doherty and McClean.

Louisville rushing leader Javian Hawkins says he is opting out of the remainder of this season to prepare for the NFL draft.

The redshirt sophomore did not play in Saturday’s 31-17 loss at Virginia, an absence Cardinals coach Scott Satterfield said was related to COVID-19. The game was postponed a week because of an outbreak within the Louisville program.

Hawkins posted on Twitter that he talked with his family before opting out. He has rushed for 822 yards and seven touchdowns this fall for the Cardinals (2-6, 1-6 Atlantic Coast Conference). Hawkins will finish the fall semester before turning his full attention to next spring’s draft.

Vanderbilt will allow parents and relatives of athletes and a number of graduate and professional students to attend the Commodores’ final two home football games.

Athletic director Candice Lee announced the decision Monday. Other Vanderbilt students and the general public will not be allowed to attend Saturday’s game against No. 6 Florida or the Nov. 28 game against Tennessee with in-person classes ending Friday. Up to 500 tickets will be issued to Florida and Tennessee for family members of their athletes as required by the Southeastern Conference.

Vanderbilt also announced no spectators will be allowed for basketball games at Memorial Gym until further notice.

Lee says parents and relatives have made many sacrifices to support their athletes and calls this a well-deserved opportunity for them to cheer in-person.