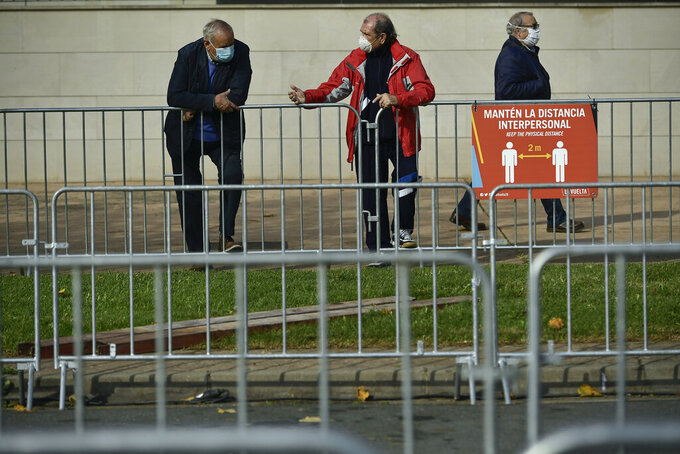 La Vuelta fans wearing face mask protection to prevent the spread of the coronavirus, keep safe a distance behind barriers, before the start of the eight stage of La Vuelta between Logrono and Alto de Moncalvillo, in Logrono, northern Spain, Wednesday, Oct. 28, 2020. (AP Photo/Alvaro Barrientos)

The team was notified of a positive test on Tuesday night and said the player immediately self-isolated according to NFL protocols. Contact tracing is being conducted and the facility is underdoing “deep cleaning,” the Texans said in a statement.

“We are in close consultation with the NFL, as well as our team of independent doctors and specialists, and will follow their guidance regarding our scheduled bye week operations,” the team added. “The health and safety of our team, as well as our entire staff, are of highest priority.”

Houston (1-6) does not play again until Nov. 8 at Jacksonville.

The American Hockey League moved its projected start of next season back to Feb. 5 in light of the ongoing COVID-19 pandemic, president and CEO Scott Howson announced Wednesday.

The AHL’s board of governors finalized that projected start date during a brief conference call. The AHL is the top minor league affiliate for the NHL, which is targeting a Jan. 1 start for the season.

“This gives us the best chance to have a significant season,” Howson said in a phone interview. “We’re going to be flexible and we’re going to do everything we can to play.”

A typical AHL season usually starts after the NHL gets under way. NHL deputy commissioner Bill Daly said he doesn’t expect this news to affect the NHL’s planning.

The Broncos (2-4) host the Los Angeles Chargers (2-5) on Sunday. They were originally scheduled to have a bye this weekend, but their schedule was juggled after a rash of coronavirus cases on the New England Patriots’ roster earlier this month.

The Bundesliga will have to play without fans again after the tentative return of spectators was cut short due to rising coronavirus infections in Germany.

Chancellor Angela Merkel and governors of the country’s 16 states passed new restrictions against the virus on Wednesday.

Professional soccer matches will have to be played without spectators starting Monday and for the rest of November, while amateur sports have been suspended altogether.

The Bundesliga has been playing with limited or no fans present this season anyway, with teams following local restrictions based on infection rates. But Wednesday’s new measures are the first nationwide clampdown since the Bundesliga’s two-month suspension when the pandemic began in March.

Switzerland’s soccer and hockey leagues will exclude fans again after the federal government imposed a ban on events of more than 50 people amid a spike in coronavirus cases.

The Swiss soccer league said a prolonged ban is “an existential threat” to clubs that rely on matchday revenue. Clubs will be “urgently dependent” on interest-free government loans in December.

Soccer and hockey teams had been allowed to sell tickets at two-thirds of stadium capacity this month if local rules permitted. That was up from a limit of 1,000 fans at soccer games in September.

Louisville will limit attendance for men’s and women’s basketball games to 15% capacity — or 3,000 people, with physical distancing — at the 22,090-seat KFC Yum! Center.

The school intends to contact season ticket holders about options in the plan that will spread spectators throughout the arena’s lower bowl and premium seating areas. Ticketing will be digital and safety measures will include temperature checks at entrances and face coverings.

The downtown arena has not been used since March 10.