The Latest: USL : 4 positive out of 1,400 Championship tests 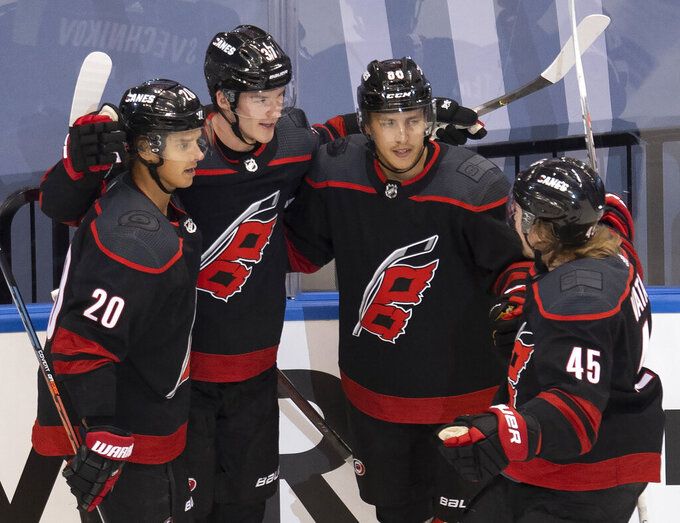 The United State Soccer League says four individuals tested positive for the coronavirus out of more than 1,400 tests given to players and staff of the 35 Championship clubs between July 20-27.

Those who tested positive will self-isolated in line with USL guidelines.

In more than 440 tests given to players and staff from the 11 League One clubs during the same time period, three individuals from one team tested positive.

Those who tested positive will self-isolate in line with league guidelines.

Coach Curt Mallory told players, coaches and support staff everyone must quarantine for 14 days. The athletic department issued a news release, saying none of the six players participated in Sunday’s March for Justice because they — and those in close contact with them — had already been isolated.

The Sycamores also say the players do not live on campus.

Las Vegas Raiders defensive back D.J. Killings and defensive end Jeremiah Valoaga have chosen to opt out of the 2020 season over concerns about the COVID-19 pandemic.

The Raiders announced the decision Monday. They are the first two Raiders to choose to sit out this season because of the coronavirus.

Killings has spent time on practice squads in Indianapolis and Green Bay but hasn’t played in a game.

Valoaga has played 13 games for Detroit and San Francisco.

The Northwestern football team has paused workouts after a player tested positive for COVID-19.

The player is isolating and several teammates are quarantining, the school said Monday. The team’s most recent workout was Friday. The next one will be Wednesday at the earliest.

The Cleveland Browns have placed third-string quarterback Garrett Gilbert on the reserve/COVID list and activated punter Jamie Gillan. He had tested positive for coronavirus.

The Browns also placed safety Karl Joseph on the active/physically unable to perform list with a foot injury. He was signed during the offseason and is expected to start.

Gilbert joined the Browns last season to back up Baker Mayfield, a close friend from their high school days in Texas. Gilbert is third on the depth chart now after the Browns signed veteran QB Case Keenum.

Last week, first-year Browns coach Kevin Stefanski said he didn’t see the need to keep his quarterbacks separated because of the virus. Other teams have considered the move in case of an outbreak.

Gillan set a team record for net average last year as a rookie. He was placed on the COVID list last week after testing positive when veterans reported.

The series was to have been played at Comerica Park from Tuesday through Thursday.

St. Louis has been in quarantine since Thursday in Milwaukee, where the Cardinals’ series last weekend was postponed, and the team is being tested daily.

St. Louis last played July 29 at Minnesota and is tentatively set to resume its schedule this Friday at home against the Chicago Cubs.

The Cardinals are the second team sidelined by the novel coronavirus since the season started July 23.

The Miami Marlins are set to resume play Tuesday in Baltimore following an outbreak within their traveling party that sidelined half the players. Miami has not played since July 26.

Because the outbreak occurred in the visiting clubhouse at Citizens Bank Park, the Phillies were sidelined for a week while they were tested daily.

The Raiders will play their first season in Las Vegas without any fans at their home games because of the COVID-19 pandemic.

The team sent a letter to season ticket holders on Monday saying that after discussion with health care officials and local leaders, the decision was made not to allow fans.

Both the New York Jets and Giants previously announced they would play without fans this season. Most other teams are hoping to be able to have at least limited crowds.

The Raiders relocated from Oakland, California, after last season.

The National Hockey League says there have been zero positive coronavirus test results since 24 teams entered quarantined bubbles in Toronto and Edmonton, Alberta.

The league announced it had administered more than 7,000 tests to players, coaches, staff and officials over the past week. Teams with 52-member traveling parties entered the bubbles July 26.

There were also zero positives the previous week when teams were still in their home cities for training camp.

Results of COVID-19 testing conducted Sunday show there were no new positive results for the Philadelphia Phillies.

The team was traveling to New York to resume its schedule against the Yankees in a night game.

Danish organizers say the Tour de France start due to take place in Copenhagen next year has been moved to 2022 to avoid being held in the same month as the rescheduled Tokyo Olympics and the European Championship soccer tournament.

Copenhagen Mayor Frank Jensen says the move means the three-stage Tour start in his city will now be planned for July 1-3, 2022, adding that he hopes the coronavirus pandemic will have passed by then.

The Tour’s French organizers have yet to announce a replacement city for Copenhagen, although there have been reports that the three-week event could start from the French region of Brittany in 2021.

This year’s Tour, which was supposed to start in June, will now be held Aug. 29-Sept. 20 — starting in Nice.