LB Shaquil Barrett proving to be bargain find for Buccaneers 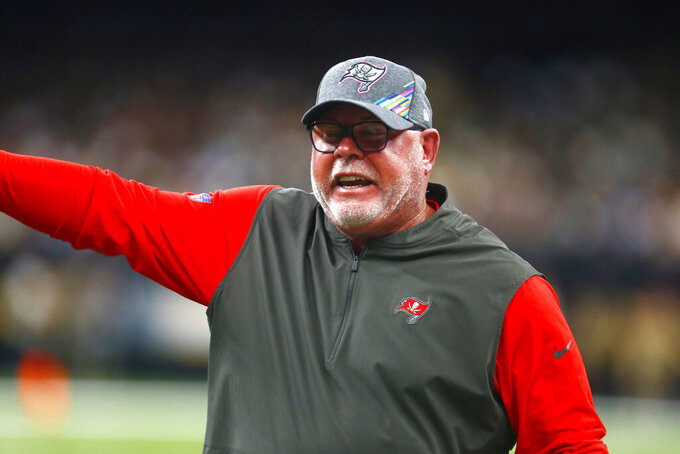 TAMPA, Fla. (AP) — Shaquil Barrett has been much more than a nice fit in Tampa Bay's new defensive scheme, emerging as a dominant pass rusher and one of the best bargains in free agency this year.

The unheralded outside linebacker who signed a one-year, $4 million deal with the Buccaneers after spending the first four seasons of his career with the Denver Broncos is tied for the NFL lead with nine sacks through six games with Cleveland's Myles Garrett and concedes he's just as surprised as anyone by the level of his success in his first season as a full-time starter.

"It is blowing my mind as well," Barrett said after being named NFC defensive player of the month for September. "I always knew I could play in the league and could produce, but at the rate it is going right now ... it is just working out perfectly for everybody — for the team, for me. It's like a match made in heaven."

Barrett appeared in 61 regular season games in Denver, where he made 15 starts and accumulated 14 sacks while learning from playing behind some of the NFL's top pass rushers, including DeMarcus Ware, Bradley Chubb and Super Bowl MVP Von Miller, who have had a big influence on his career.

The prospect of playing an expanded role for Tampa Bay was enticing to the 26-year-old because the Bucs, who haven't made the playoffs since 2007, were converting from a 4-3 defense to a 3-4 scheme installed by new defensive coordinator Todd Bowles.

"Shaq understands the game. He's a very savvy player. ... He works on technique," Bowles said, reflecting on the linebacker's fast start, which included three sacks during a win at Carolina on Sept. 12, followed by a franchise record-tying four-sack performance in a 1-point loss to the New York Giants at home.

"He's done a great job against the run, which goes unnoticed. Obviously that sets up his pass stuff," Bowles added. "He has an arsenal and (pass rush) toolbox that he uses, and he strives to get better every day, and that's just a credit to him."

Barrett is tied with Garrett for the league lead in sacks, despite being held without one during losses to the Saints and Panthers the past two games.

Neither player will add to their totals this week because the Bucs (2-4) and Browns have byes.

In addition to getting some much-needed rest during a break in a stretch in which Tampa Bay is playing five consecutive games away from Raymond James Stadium, Barrett is looking forward to trying to help the team get headed in the right direction.

"I love all the recognition, but I just want to play football," Barrett said. "That's all this is about for me — winning and playing football."

Coach Bruce Arians said while Barrett demonstrated the potential to be an effective full-time player while he was with the Broncos, there was no way to predict he'd burst onto the scene with eight sacks in the first three games.

"He's around the quarterback a lot and disrupting, swatting at hands, even when he's not getting home," Arians said. "That's what he was on tape when he played (in Denver)."

Barrett wrapped up a dominating four-week run with his first career interception and a fourth quarter sack of Jared Goff, forcing a fumble Ndamukong Suh returned for the clinching touchdown in a 55-40 road upset of the defending NFC champion Los Angeles Rams.

"The roles I was in my first four years, I think that was perfect for me," Barrett said. "I wasn't ready to be a consistent starter, but now I feel like I am ready and everything is just working out."

Opponents inevitably took notice of his stellar play and began to pay extra attention to Barrett.

Help could be on the way.

Pierre-Paul, who's on the reserve/non-football injury list after leading the Bucs with 12½ sacks last season, practiced two days during the bye week and could be activated by the end of the month.