LEADING OFF: Red Sox try to close out Rays on Marathon Day 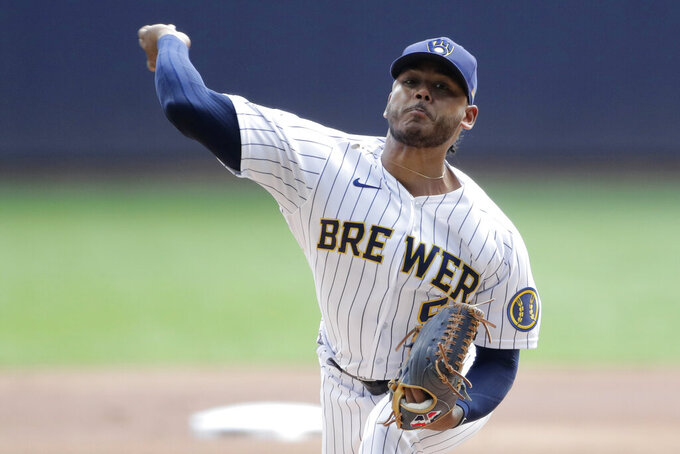 A look at what's happening around the majors on Monday:

Boston fans hope to enjoy plenty of runners -- and runs -- on a big sports day in town.

It begins with the 125th Boston Marathon, the first time the event is being held in the fall. Canceled last year and postponed this spring from its usual Patriots’ Day start by coronavirus concerns, the course takes runners through Kenmore Square, about a block from Fenway Park, with a mile to go to the Back Bay finish line.

The Red Sox traditionally play on the April date of the marathon. They’ll be in action this time, too, with higher stakes -- Game 4 of the AL Division Series against Tampa Bay.

A day after winning a wild one, helped by a bizarre bounce, the wild-card Red Sox look to close out the Rays at Fenway. Boston leads 2-1 in the best-of-five series.

Dodgers ace Max Scherzer is riding a pair of long streaks going into his start in Game 3 of the NL Division Series against the Giants.

He wouldn’t mind ending one of them.

On the mound, the three-time Cy Young Award winner is 7-0 with a 1.98 ERA in 12 starts since being traded from Washington to Los Angeles in late July. That includes a no-decision in the NL wild-card game Wednesday against St. Louis when he allowed one run in 4 1/3 innings.

At the plate, Scherzer hasn’t been so hot. A good-hitting pitcher for most of his career, he’s been shut out this year: a whopping 0 for 59. He hasn’t safely reached base a single time -- he has four sacrifice bunts and a sacrifice fly.

The best-of-five matchup is tied at one game each. Alex Wood is set to start for the Giants at Dodger Stadium.

Wanting to return to a starting role, Wood signed with the Giants in the winter and went 10-4 with 3.83 ERA. This will be his third postseason start, Scherzer will be making his 20th.

Freddy Peralta will be pitching for the first time in more than two weeks when he starts for Milwaukee in Game 3 of the NL Division Series at Atlanta.

Peralta warmed up in the bullpen in the eighth inning of the Brewers’ win in Game 1.

“For me, that helped a lot because my arm felt a lot better after that day,” he said.

This will be the first postseason start for the 25-year-old Peralta.

Ian Anderson (9-5, 3.58) starts for the Braves with the series even at one game apiece. He is 2-0 with a 0.96 ERA in four postseason games and started in Game 7 of last season’s NL Championship Series loss to the Dodgers, allowing two runs in three innings.

The 23-year-old Anderson took a no-hitter into the seventh inning of a 5-1 win at Milwaukee on May 15. He was on the injured list with right shoulder inflammation from July 16 to Aug. 19.

A PAT ON THE BACK

Red Sox manager Alex Cora has been getting encouragement from someone else in New England who’s done a lot of winning -- Patriots coach Bill Belichick.

Cora said Belichick reached out before Tuesday’s wild-card victory over the New York Yankees, and sent another note after that.

“That’s like the highlight of the year,” Cora said before Game 3 of the AL Division Series against the Rays. “I got the text from this random area code. That’s cool, to be honest with you, for somebody of his status to wish us luck.”

So, has Rays manager Kevin Cash heard from Tom Brady, who led Tampa Bay to the Super Bowl championship after winning six rings in New England?