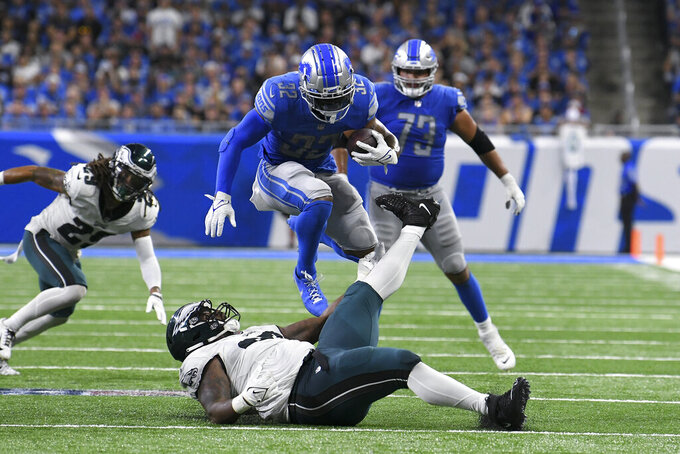 Despite his defense giving up the second-most points of any team on Sunday, Campbell believes it will be much improved when the Lions host Washington on Sunday.

“If we played that opponent again, we’re going to be so much cleaner on it than we were,” Campbell said. “We would handle it so much better.”

The Lions staged a late rally, scoring two fourth-quarter touchdowns. The Eagles were able to run out the clock by picking up two first downs.

“We kind of ran out of time there, but there were a lot of encouraging things,” Campbell said. “After watching the tape, it was better than I felt after the game.”

Eagles quarterback Jalen Hurts frustrated the Lions by gaining 90 yards on 17 carries, along with passing for 243 yards. His running threat went a long way toward Detroit giving up 27 first downs.

At times, Lions defenders were in good position to contain Hurts, but wound up lunging at him rather than continuing to move their feet.

“He’s a hard guy to corral,” defensive lineman Austin Bryant said. “It’s tough but there’s no excuse. We’ve got to do it. This is the NFL, this is what you get paid to do. Teams have done it (slowed Hurts) and clearly we didn’t do it on Sunday.”

There were much more obvious bright spots on offense. D’Andre Swift rushed for a career-high 144 yards on just 15 carries.

“He’s special and we know that,” Campbell said. “So, (a matter of) just getting him his touches. He’s kind of the secret sauce there. He can turn routine plays into explosive plays that will hurt you if you’re the opponent.”

Quarterback Jared Goff bounced back from a second-quarter pick-6 to pass for 215 yards and two touchdowns.

“There was some rough moments, but I loved the way he responded in the second half to get us back in it,” Campbell said. “He settled in and did some really good things and gave us a chance at the end.”

The Lions can’t expect their offense to produce five touchdowns every game, so it’s up to the defense to start pulling its weight.

“We’ve got 16 games to build and show who we are. That’s what I hang my confidence on,” Bryant said.

The Lions could have given up after trailing by 17 entering the fourth quarter. They instead showed some resiliency with scoring drives of 75 and 72 yards to keep the pressure on the Eagles. They were 4-for-4 in the red zone, finishing off long possessions with touchdowns rather than field goals.

Not only did the Lions fail to contain Eagles quarterback Jalen Hurts on run-pass options and scrambles, they allowed the Eagles group of running backs to find a rhythm. Miles Sanders gained 96 yards on 13 carries and he scored his first touchdown since 2020.

D’Andre Swift set a goal of 1,000 yards rushing and receiving this season. The third-year back is well on his way in the former category, as he rushed for a career-high 144 yards. He quickly displayed his burst during the team’s opening drive with a 50-yard scamper. He has some catching up to do in the receiving category to reach his goal, as he had 31 yards on three receptions.

The Lions were hoping the No. 2 overall pick of the draft, defensive end Aidan Hutchinson, would make an immediate impact on their pass defense. It didn’t work out that way. The only sack Detroit had came on a safety blitz. Hutchinson, who set the University of Michigan’s single-season record last year with 14 sacks, was credited with one assisted tackle.

“Honestly, I’m not even worried about him,” Campbell said. “He’s going to learn from this and he will be better.”

The Lions came out of the opener without any major injury concerns. Cornerback Jeff Okudah, who suffered a ruptured left Achilles tendon in last year’s opener, dealt with cramps that forced him to the sideline at times.

8 — In Dan Campbell’s 18 games as the Lions coach, the team has given up 30 or more points eight times.

During the team’s first two games last season, they allowed a combined 76 points to San Francisco and Green Bay. The good news for Detroit is that its next opponent, Washington, hasn’t scored 30 points since Oct. 3 of last season. The bad news is that Carson Wentz threw four touchdown passes in his Commanders debut.

The Lions must do a better job of getting off the field and giving the ball back to the offense with good field position. They allowed the Eagles to convert 10 of 17 third-down situations and two of three fourth-down attempts.