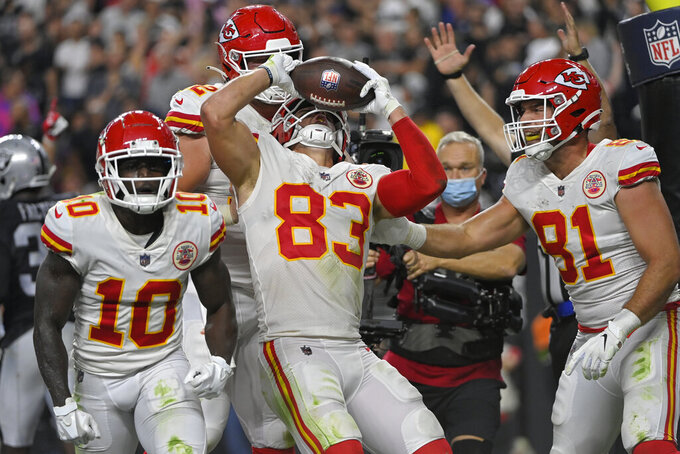 LAS VEGAS (AP) — Patrick Mahomes scrambled away from pressure as he ran toward the line of scrimmage and launched a deep ball that turned a seemingly broken play into a touchdown.

The Mahomes of old was back Sunday night and the Kansas City Chiefs are back at their usual spot atop the division.

Mahomes threw five touchdown passes and returned to his usual form after a surprisingly shaky stretch this season, and the Chiefs raced past the Las Vegas Raiders 41-14 on Sunday night.

“We’ve done it before,” Mahomes said. “We’ve done it these last few seasons we were doing at the beginning of this season. We were moving the ball and making a lot of stuff happen. We were just turning the ball over. Then we kind of went through a little little spell where we weren’t making these drives and we were still finding ways to win. I knew that we’re going to click back into it.”

Mahomes and the Chiefs (6-4) showed little resemblance to the team that overpowered the AFC the past three seasons over the first nine weeks, raising questions about whether they could make it back to a third straight Super Bowl.

But they used a dominant performance over the Raiders (5-4) on a day everyone else in the division lost to return to the top of the standings.

Mahomes completed three short TD passes before flashing his playmaking brilliance early in the fourth quarter after Kansas City converted a fake punt on a 16-yard pass from Tommy Townsend to Marcus Kemp.

Two plays later, Mahomes scrambled and lofted a deep pass across his body that Darrel Williams caught for a 38-yard TD that made it 34-14. He almost decided to run or throw a shorter pass before he saw the chance to the big play.

“Out of peripheral I saw Darrel,” Mahomes said. “I actually underthrew it a little bit. He tells me he catch, Darrel does. I guess I see that he can. So he made a pretty big-time play.”

Mahomes added a 22-yarder to Byron Pringle and finished 35 for 50 for 406 yards. He also connected on an 8-yarder to Tyreek Hill in the first quarter and then 1-yarders to Hill and rookie tight end Noah Gray.

The Raiders have dropped back-to-back games after a promising start to the season as poor execution and off-field issues have done them in.

They won two straight games after coach Jon Gruden resigned following the publication of his old offensive emails but haven't looked the same the past two weeks. Both losses followed the release of Henry Ruggs III, who was charged with felonies in a DUI crash that killed a 23-year-old woman.

Las Vegas has turned the ball over five times the past two weeks, matching the total from the first seven games, and the improved defense was unable to slow down Mahomes.

Derek Carr threw two TD passes but also had his third interception in the past two weeks as the offense struggled to get going.

“We got in a hole and against this team that's hard,” Carr said. “They just play soft coverage. They get a big lead, play soft coverage, blitz here and there and make you throw in front. It's a hard way to do it.”

The Raiders brought in speedy receiver DeSean Jackson this week to fill the void left by Ruggs' release. Jackson had an inauspicious welcome to Las Vegas. On his first target of the game in the third quarter, Jackson caught a 40-yard pass from Carr. But Rashad Fenton knocked the ball out and Tyrann Mathieu recovered.

Instead of the Raiders having a chance to cut into a 10-point deficit, the Chiefs drove for a field goal to make it 27-14.

“Maybe a turning point in the game to some degree,” interim coach Rich Bisaccia said. “The bottom came out after that.”

Punter AJ Cole delivered one of the plays of the first half for the Raiders when he forced a fumble by returner Mike Hughes that Foster Moreau recovered at midfield.

That set up Las Vegas' only scoring drive of the first half when Carr connected on a 6-yarder to Hunter Renfrow.

Chiefs: CB Charvarius Ward left the game with an illness.

Raiders: FB Alec Ingold left the game in the first half with a serious knee injury and didn't return. ... RB Jalen Richard (ribs) left in the second half.