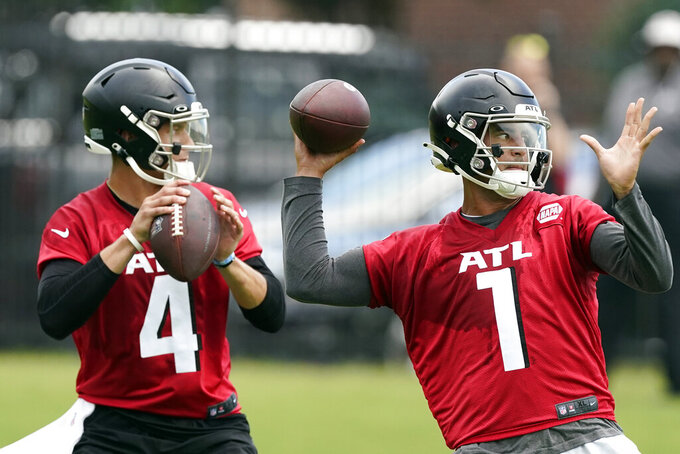 LAST YEAR: The Falcons, looking for a fresh start under first-year coach Arthur Smith and general manager Terry Fontenot, were outscored 459-313. It marked Atlanta's fourth consecutive losing season and helped convince the new leadership team it was time to address salary cap woes. Tough financial decisions had been pushed back for too long, so the team accepted a cap hit of more than $40 million in dead money while trading 14-year starting quarterback Matt Ryan to Indianapolis after the season. The Falcons have avoided the word “rebuild” but Fontenot said the team was “taking it on the chin” while operating from a financial disadvantage in 2022. The team lost top wide receiver Russell Gage and leading tackler Foye Oluokun to free agency. After playing only five games while stepping away during the season to address mental health issues, wide receiver Calvin Ridley was suspended by the NFL for 2022 for betting on games.

CAMP NEEDS: The health of the established leaders, including CB A.J. Terrell, TE Kyle Pitts and RB/WR Cordarrelle Patterson, must be protected as this roster can't lose its few proven standouts. Depth at quarterback also could be a challenge as Feleipe Franks, the only option behind Mariota and Ridder, spent more time at tight end in minicamp.

KEY CAMP COMPETITIONS: Mariota is favored to hold off Ridder for the starting job at quarterback, though Ridder made a strong first impression in minicamp. Ridder won’t be the only rookie in the spotlight during training camp. Allgeier should make an immediate impact on the depth chart at running back. Edge rushers Ebiketie and DeAngelo Malone also can earn prominent roles in their rookie seasons. Meanwhile, a new-look depth chart at wide receiver needs to become defined during camp as London competes with newly added veterans Edwards, Byrd, Tate and others.

EXPECTATIONS: Only the Houston Texans face longer Super Bowl odds than the Falcons, who may have difficulty matching their seven wins from Smith's debut season. Atlanta and Carolina could battle for the last two spots in the NFC South.