Massie hooked on Colorado, Broncos glad they landed the vet 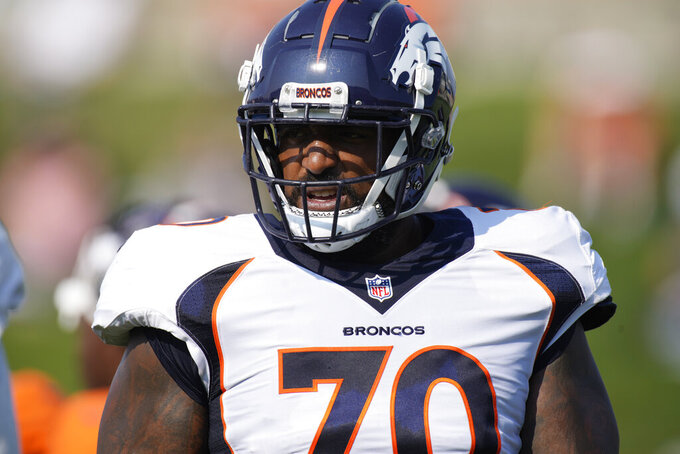 He and his wife, Angie, bought a home in Castle Rock a year ago as he was entering the second season of his four-year deal with the Chicago Bears.

That second home became a primary residence when the Bears let him go in January after he was limited to eight games by a knee injury.

Massie decided to get some work done on the new house while waiting to see where his next stop was in his 10-year NFL journey.

That answer came in May after Ja’Wuan James tore an Achilles tendon while working off-site, which led to his release that saved the Broncos his $10.58 million salary.

The Broncos signed Massie to a one-year, $2.5 million deal.

“I had purchased a home here. So, I had planned on living here regardless,” Massie said. “Me and my wife had been coming her for the past five or six years about three or four times a year. Just vacation. We hike and we fish and it was just the perfect place for the both of us.”

Massie's new home is about a 25-minute drive down I-25 from the team's training center in suburban Englewood and about twice that far to Empower Field at Mile High.

“It was just a great opportunity for me and my family,” Massie said. “I had already planned on living here and I’d always wanted to play in a place I called home and they had an opening and I can do the job.”

Massie beat out Calvin Anderson and Cam Fleming this summer.

“I think he’s done a really good job," offensive coordinator Pat Shurmur said. “He’s very diverse. I think he’s good in pass protection but he’s also good in the run game. ... He’s got a veteran way about him (that) I appreciate. We were talking about cadence yesterday just off to the side. That’s what veteran players do.”

The Broncos have churned through right tackles more than they've rotated quarterbacks since winning the Super Bowl in Peyton Manning's final game.

“I've heard about it but I haven't dug into it,” Massie said of the Broncos' carousel of right tackles over the last five seasons.

Massie aims to do something no Broncos player has since Orlando Franklin in 2012 — start every game at right tackle.

Massie is one of those veterans who isn't shy about saying he can still learn a new trick or two even at age 32.

In Denver, he's found inspiration in offensive line coach Mike Munchak, a Hall of Famer, and Von Miller, who has a decent chance of ending up in Canton himself one day.

“Munch is a great coach. I can learn a lot from him. He's got a (gold) jacket, so he can give me more tools to add to my belt,” Massie said. “He's got a lot of wisdom and I'm here to learn from him.”

Facing Miller during training camp was another plus in Massie's view: “Von ain't missed a step. He's a walking jacket. He's a hell of a player.”

Massie is just as thrilled to be living in the shadow of the Rocky Mountains full time now.

“It's beautiful here. No humidity. I love it," Massie said. “I love fishing. I'm a huge bass fisherman and I've gotten into fly fishing.”

The streams and lakes are his greens and fairways.

“I can't golf for nothing. So, that's my version of golf is fly fishing,” Massie said. "I'd rather be outside fishing than inside watching TV.”

Notes: Coach Vic Fangio said OLB Bradley Chubb (ankle) is 50-50 for the opener. ... The Broncos practiced Friday inside their fieldhouse. One reason was to get Von Miller on turf before the opener at the Meadowlands, where the surface is artificial. It was inside the fieldhouse that Miller suffered a season-ending ankle injury a year ago. Fangio said Miller did fine on the turf.