Mixed feelings: Cards back in playoffs, but not playing well 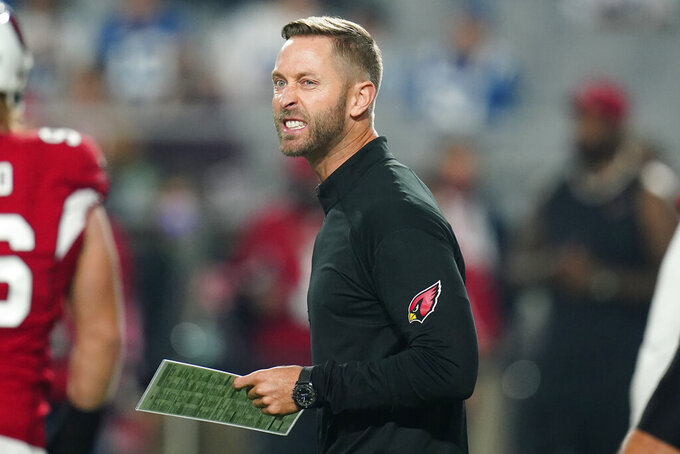 GLENDALE, Ariz. (AP) — The Arizona Cardinals have qualified for the NFL's postseason for the first time since 2015.

That's the end of the good news.

As for the not-so-good news, it's hard to know where to begin. The Cardinals are mired in a three-game losing streak, look lost on offense without their best receiver, and aren't playing nearly as good on defense as they previously were.

The latest setback was Saturday, when they lost 22-16 at home to a banged-up Indianapolis Colts team that was missing its best defensive player, four starting offensive linemen and their starting tight end. Arizona (10-5) still managed to back into the playoff bracket when the Rams beat the Vikings on Sunday.

That doesn't make Arizona's regression any less alarming. Since starting the season with a 7-0 record, the Cardinals are 3-5. Coach Kliff Kingsbury said after Saturday's loss that earning a playoff spot wouldn't change the way he felt about the game.

The Cardinals are now 0-5 in games that could clinch a postseason berth during his three seasons in charge.

“We’re looking at ourselves, looking in the mirror, and trying to figure out what we have to do,” coach Kliff Kingsbury said. “Because right now, it’s not good enough.”

The Cardinals obviously miss three-time All-Pro receiver DeAndre Hopkins, one of the best receivers in the NFL and who commands a ton of attention from opposing defenses. He's likely out for the rest of the regular season with a knee injury.

But the roster should have enough talent to function at a higher rate than it is right now. Receivers A.J. Green and Christian Kirk, along with tight end Zach Ertz, are all high-quality players.

“The answers are in that locker room and those coaches' offices and we’ve got to figure it out,” Kingsbury said.

Murray didn't have his best game against the Colts, but he also continues to play well enough to give the Cardinals a chance to win. He threw for 245 yards and a touchdown while also running for 74 yards, including a 57-yard scamper that set up the team's first touchdown.

Murray hasn't been as active running the ball this season but he might have to use that part of his game more often in the final few weeks.

The Cardinals had looked like they fixed their penalty problems, but once again, they're making loads of unforced errors. They were called for 11 penalties against the Colts, including seven in the first half. Several were dead-ball infractions like false starts.

Pro Bowl safety Budda Baker was everywhere on Saturday, finishing with 12 tackles, one sack, two tackles for loss, two quarterback hurries and one pass defended. He's one of the few Cardinals playing to his potential and is the unquestioned leader of the secondary.

A tough game for kicker Matt Prater is a big reason the Cardinals lost to the Colts. The veteran missed field goals from 51 yards and 41 yards and also missed an extra point. That's seven points that would have been very useful in the six-point loss.

The Cardinals got some good news on Monday when starting center Rodney Hudson was activated from the reserve/COVID-19 list. Arizona also hopes that RB James Conner (heel) and WR Rondale Moore (ankle) can bounce back and play against the Cowboys. Kingsbury said CB Marco Wilson (shoulder) is still being evaluated after getting hurt against the Colts. Kingsbury said punter Andy Lee hasn't cleared COVID-19 protocols but he's hopeful he'll be back before the Cowboys game.

Kingsbury added that getting back Hudson is particularly important for the offensive line.

“He's the glue that's made it all stick together,” Kingsbury said.

24 — number of false starts this season for the Cardinals. It's tied for second most in the NFL behind the Detroit Lions.

The Cardinals know they're in the playoffs so now they can concentrate on playing better football. Murray and Kingsbury are correct in saying that most of the team's problems — especially the penalties — are fixable.

The problem is they've been saying that for most of the past three seasons. If it doesn't get fixed over the next few weeks, it's fair to wonder if it ever will be. Another tough game looms on Sunday when the Cardinals travel to face the Dallas Cowboys, who have also clinched a playoff spot by winning the NFC East.