Mock Draft: Look to the trenches at beginning of selections 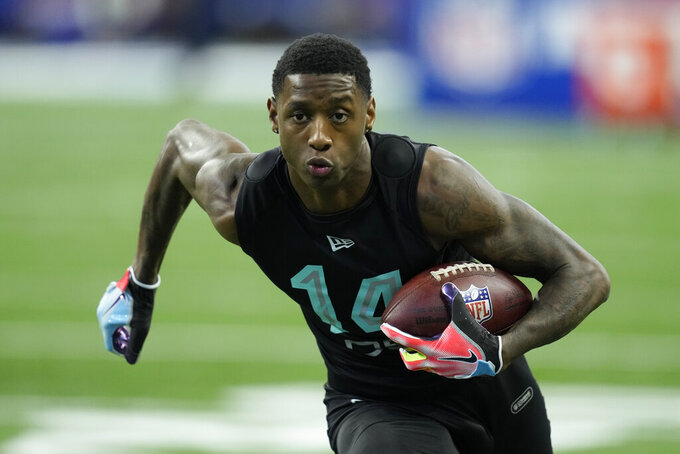 FILE - Cincinnati defensive back Sauce Gardner participates in a drill at the NFL football scouting combine, Sunday, March 6, 2022, in Indianapolis. Gardner is expected to be taken in the NFL Draft.(AP Photo/Charlie Neibergall, File)

LAS VEGAS (AP) — Our head is still spinning from all the draft movement over the past five weeks. There might very well be more trades involving first-round picks before everyone settles in near Caesars Palace and the Bellagio fountains for what promises to be a wild event.

Maybe as wild as the restructuring of the draft order already.

Not as much of a slam dunk as Trevor Lawrence last year at the top. Close enough, though.

Some believe the Lions will go quarterback here. Maybe in 2021 that would make sense. Not this time.

The Texans elevated Lovie Smith to head coach and Lovie loves defensive studs. For the first time in 30 years, the top three are from that side of the ball.

This draft is loaded with receivers, so the Jets wait until No. 10 for one. Instead, they also go defense.

New general manager Joe Schoen knows one thing about this roster: the need for blockers. He gets maybe the best in ...

Teams desperate for quarterbacks overreach. We're not saying Kenny Pickett isn't deserving of being the first QB taken, but at sixth overall?

The Giants could go for yet another O-lineman here, but there's a stud pass rusher available, even though his consistency and ability to stay healthy are questionable.

If the Falcons don't go wideout here, then Atlanta isn't in Georgia.

Part of the payment for Russell Wilson. Will it be his eventual replacement? Had Pickett been on the board, certainly. Might be another reach ...

And now for that receiver, just a decision on going to Ohio State or USC.

The Jets' pick makes this one much easier for the Commanders, who go Buckeyes.

The Vikings weren't focusing on the line in front of Kirk Cousins. Then this stud blocker was available.

Part of the Deshaun Watson deal. Houston addressed the D-line and now goes to the other side.

Baltimore's secondary was a sieve last season, very unlike the Ravens. Here's some help.

Edge rusher or massive DT? The Eagles could go either way.

16. New Orleans (from Indianapolis through Philadelphia)

Another team some folks believe will go quarterback here. We think the Saints are satisfied with Jameis Winston for a while. Not so satisfied with their receiving group or offensive line.

This is not a huge need, but with him still around, the Chargers can't pass on playmaking ...

Philly used about 10 seconds to get the other DL it considered at No. 15.

We still don't see the Saints going quarterback. They will decide between a star receiver coming off an ACL tear and a slightly less terrific wideout who is healthy.

OK, we'll go the quarterback route here. Steelers can only hope they get another Big Ben career out of ...

Even though the Patriots needs pass catchers, they have been burned by going high in the draft for them. So ...

Part of the Davante Adams deal. And just in time to take a receiver who could fit in quickly.

The Cardinals also want a wideout, and they will have to wait a spell for this guy — who might be the best receiver in this draft when healthy.

Remember how staunch the Dallas offensive lines were for years? No longer, so the Cowboys address that area.

An early Super Bowl favorite with the wise guys in Vegas, Buffalo looks for a starting cornerback to go with Tre'Davious White once he is healthy.

The need for playmakers in the passing game remains in Music City. So the Titans sing out the name of ...

Well, it won't likely be a QB with Tom Brady ending his short retirement without missing a game.

Having taken a wideout earlier, the Packers can concentrate on the defense. They could go secondary here, too.

Part of the payment for Tyreek Hill. But the Chiefs snap the string of Georgia Bulldogs with this selection.

And again for Kansas City's D.

So close to their first Super Bowl title, the Bengals can go for the best player available. He's a pass rusher who can stop the run.

The Lions can't wait for anyone. They could take a quarterback here, but Detroit goes again in two spots.