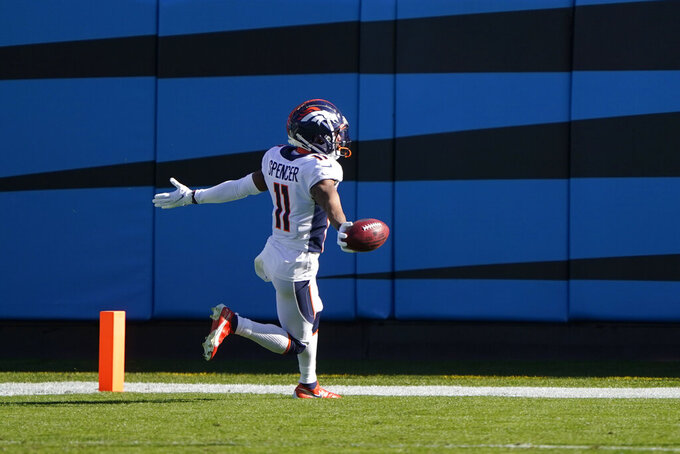 Denver Broncos wide receiver Diontae Spencer celebrates after scoring during the first half of an NFL football game against the Carolina Panthers Sunday, Dec. 13, 2020, in Charlotte, N.C. (AP Photo/Brian Blanco)

Baltimore at Cleveland, 8:15 p.m. EST, ESPN — A rematch of the season opener, when the Ravens routed the Browns 38-6 to spoil coach Kevin Stefanski's debut with Cleveland. The Browns (9-3) have won nine of 11 since and are riding their second four-game winning streak of the season. The Ravens (7-5) have spent the past few weeks dealing with COVID-19 issues, but quarterback Lamar Jackson returned to help them beat Dallas last Tuesday night.

— Drew Lock, Broncos, threw for 280 yards and a career-high four touchdowns to lead Denver past Carolina 32-27.

— Russell Wilson, Seahawks, threw four more touchdowns passes to give him a career-high 36 for the season before resting in the fourth quarter of Seattle's 40-3 rout of the New York Jets.

— Jalen Hurts, Eagles, ran for 106 yards and threw for 167 and one touchdown in his first NFL start as Philadelphia beat the New Orleans 24-21.

— David Montgomery, Bears, ran for an 80-yard touchdown on Chicago's first play from scrimmage, tied the fourth-longest run in franchise history, and finished with a season-high 113 yards on 11 carries in a 36-7 rout of Houston.

— Miles Sanders, Eagles, had 115 yards rushing and a pair of scores to help lead Philadelphia past New Orleans 24-21.

— Dalvin Cook, Vikings, rushed for 102 yards against the league’s No. 1-ranked rushing defense in Minnesota's 26-14 loss at Tampa Bay.

— Allen Robinson, Bears, caught nine passes for 123 yards and a touchdown in Chicago's 36-7 rout of Houston.

— Michael Badgley, Chargers, hit a 43-yard field goal as time expired to lead Los Angeles to a 20-17 victory over Atlanta.

— Mike Nugent, Cardinals, came off the practice squad and kicked his first four field goals in more than a year in Arizona's 26-7 victory over the New York Giants.

— Khalil Mack, Bears, had a sack for a safety, recovered a fumble and deflected a pass to help Chicago top Houston 36-7.

— Rookies Chase Young and Kamren Curl, Washington, each scored defensive touchdowns in a 23-15 win at San Francisco. Young scooped up a fumble and returned it 47 yards for a touchdown late in the second quarter. Curl intercepted a pass from Nick Mullens and ran 76 yards the other way for a score in the third quarter.

— Khari Willis, Colts, clinched Indianapolis' 44-27 win with a 53-yard interception return for his first career touchdown with 5:22 to play.

— Taron Johnson, Bills, returned an interception 51 yards for a score in Buffalo's 26-15 win over Pittsburgh.

— Aldon Smith, Cowboys, returned a fumble 78 yards for a touchdown in Dallas' 30-7 win at Cincinnati.

Kansas City's Patrick Mahomes joined Peyton Manning and Dan Marino as the only players in NFL history with at least 4,000 yards passing in three of his first four seasons. Mahomes' 26 games with at least 300 yards passing ties him with Kurt Warner for the most in a player's first four years. His 14 games of 350 or more yards passing are the most. ... The Chiefs' Travis Kelce has 25 games with at least 100 yards receiving, surpassing Kellen Winslow for the third-most such games in NFL history. Only Tony Gonzalez (31 games) and Rob Gronkowski (29) have more. Kelce is also the first tight end with at least 1,200 yards receiving in three seasons. ... Seattle safety Jamal Adams has 8 1/2 sacks this season, the most in a single season by a defensive back since sacks became official in 1982. ... Justin Herbert passed for 243 yards and two touchdowns in the Los Angeles Chargers' 20-17 win against Atlanta. He has 25 TD throws, making him the fourth rookie with at least that many, joining Baker Mayfield (27 in 2018), Peyton Manning (26 in 1998) and Russell Wilson (26 in 2012). ... The Chargers' Keenan Allen had nine receptions to give him 623 for his career in his 99th game, surpassing Antonio Brown (622) for the most by a player in his first 100 games. ... Buffalo's Stefon Diggs reached 100 receptions, tying Eric Moulds’ single-season record set in 2002. Diggs also joined Brandon Marshall in 2012 as the only players in NFL history to catch 100 or more passes in their first 13 games with a new team.

The Jets' 40-3 loss to Seattle was a franchise-record 13th straight. One a positive note, New York scored on its first possession for the seventh straight game — two touchdowns, five field goals — a team record and the NFL's longest active streak. ... Chicago sacked Houston's Deshaun Watson seven times, including a safety by Khalil Mack, to tie a career high for the Texans quarterback in the Bears' 36-7 win. Chicago stopped a six-game losing streak. ... Washington’s 23-15 victory at San Francisco marked its first four-game winning streak since 2016. ... Pittsburgh extended its sack streak to a 70th consecutive game to break the NFL record set by the Tampa Bay Buccaneers from 1999 to 2003.

Haason Reddick had a franchise-record five sacks and three forced fumbles as the Arizona Cardinals spoiled the return of Giants quarterback Daniel Jones and moved back into an NFC playoff spot with a 26-7 victory over New York on Sunday. Reddick broke the team mark of 4 1/2 by Curtis Greer on Dec. 18, 1983, against Philadelphia. Reddick became the first player with at least five sacks and three forced fumbles since Green Bay's Vonnie Holliday accomplished the feat in 2002.

Derrick Henry ran for 215 yards and two touchdowns as the Tennessee Titans dominated Jacksonville 31-10 and handed the Jaguars a 12th consecutive loss. It was Henry's best performance in five trips to his hometown area. It also was Henry’s fourth game with at least 200 yards and two scores, breaking an NFL record he previously shared with Pro Football Hall of Famers Jim Brown, Barry Sanders and LaDainian Tomlinson. Henry also topped the century mark for the ninth consecutive road game, leaving him one shy of the NFL mark set by Sanders over the 1996 and 1997 seasons.

Green Bay receiver Davante Adams caught seven passes for 115 yards in the Packers' 31-24 win at Detroit and broke a franchise record. He extended his touchdown reception streak to eight games, turning a short pass from Aaron Rodgers into a 56-yard TD in the first quarter. Adams broke the franchise mark set by Pro Football Hall of Famer Don Hutson, who had a pair of seven-game streaks in the 1940s.

Philadelphia rookie quarterback Jalen Hurts threw for 167 yards with one touchdown and added 106 yards rushing in his first NFL start, a 24-21 win over New Orleans. Hurts joined Baltimore's Lamar Jackson — who had 119 yards rushing in Week 11 of the 2018 season — as the only quarterbacks with at least 100 yards rushing in their first career start.

Jacksonville running back James Robinson became the first undrafted rookie in NFL history to top 1,000 yards in the first 14 weeks of a season. He accomplished the feat with a 47-yard run early in the fourth quarter of the Jaguars' 31-10 loss to Tennessee. Robinson also became the fourth undrafted rookie to reach 1,000 yards rushing for a season, joining Indianapolis’ Dominic Rhodes (1,104 in 2001), Denver’s Phillip Lindsay (1,037 in 2018) and Tampa Bay’s LeGarrette Blount (1,007 in 2010).

Dallas Cowboys quarterback Andy Dalton put an exclamation point on his return to Cincinnati with a short touchdown pass late in the game to pile some more points on top of the woeful Bengals. He was the starting quarterback for the Bengals for nine seasons and was unceremoniously released after the team took Heisman Trophy winner Joe Burrow with the top pick in the NFL draft last spring. Back in Paul Brown Stadium as the Cowboys starter on Sunday, he was good enough to help lead his new team to a 30-7 win over his old one. Dalton finished 16 for 23 for 185 yards and two TDs, including a 7-yarder to Tony Pollard for a 7-yard score with 2:00 left in the game. Afterward, coach Mike McCarthy presented him with the game ball.

Buffalo's Josh Allen upped his season total to 35 combined touchdowns (28 passing, six rushing and one receiving) to break the team’s single-season record of 34 set by Hall of Famer Jim Kelly in 1991. His 28 TD passes rank second most on the team list, and five behind the single-season record set by Kelly in ’91. Allen finished 24 of 43 for 238 yards and two TDs with an interception in the Bills' 26-15 win over Pittsburgh.

Alex Smith left Washington’s game against the San Francisco 49ers on Sunday with soreness and tightness in his right leg, which he broke in two places in November 2018, sidelining him for nearly two calendar years. Coach Ron Rivera said Smith was available in an emergency. Washington won 23-15. Rivera said Smith experienced soreness when he tried to push off with his right leg. ... Detroit quarterback Matthew Stafford was knocked out of a 31-24 loss to Green Bay with a rib injury. ... Miami wide receivers DeVante Parker (leg) and Jakeem Grant (leg), and tight end Mike Gesicki (shoulder) were forced out of the Dolphins’ 33-27 loss to Kansas City Chiefs. ... Cincinnati quarterback Brandon Allen injured his right leg late in the Bengals' 30-7 loss to Dallas and didn’t return. ... Denver reserve cornerback Duke Dawson was carted off the field in the first quarter after a non-contact injury to his left knee and did not return to the Broncos' 32-27 win at Carolina. ... Indianapolis lost cornerback Xavier Rhodes (knee) and linebacker Darius Leonard (back) in its 44-27 victory at Las Vegas.

“We won the Super Bowl here and just clinched the AFC West. It seems every time we leave this stadium we have a hat about something we accomplished. The (bad) part, it seems, is like I have half my interceptions at this stadium.” — Kansas City quarterback Patrick Mahomes, whose Chiefs rallied for a 33-27 win over Miami at Hard Rock Stadium — where they won the Super Bowl in February. Mahomes had two interceptions in that game and had three on Sunday.

“He should be the front-runner for the MVP.” — Green Bay coach Matt LaFleur on quarterback Aaron Rodgers, who was 26 of 33 for 290 yards, three TDs and did not throw an interception for a third straight game while lifting the Packers to a 31-24 win at Detroit that clinched the NFC North title.

“I didn’t know if Odell Beckham Jr. was playing defense for us there. I had to stop for a second there and kind of think, ‘Did he actually catch that ball?’ It was really just one of those once-in-a-lifetime chances, a really great play.” — Indianapolis coach Frank Reich on Kenny Moore’s one-handed, diving end-zone interception in the Colts' 44-27 win at Las Vegas.