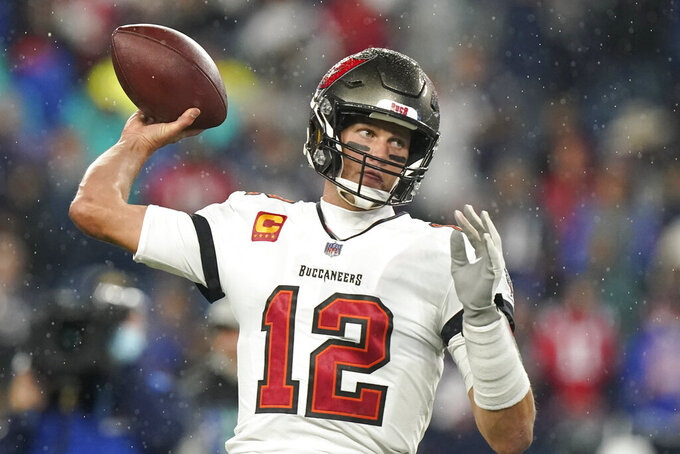 Raiders at Chargers, 8:15 p.m. EDT. The AFC West is looking like the best division in football with the emergence of the Broncos and the undefeated Raiders, who are off to their first 3-0 start since 2002, the last season they reached the Super Bowl. Las Vegas is sure to have plenty of fan support when it visits SoFi Stadium — the Raiders have more history in Los Angeles than the Chargers, who moved there in 2017. Although both teams have been impressive early, their games have been close — two of the Raiders' wins were in overtime, while Justin Herbert has directed two winning fourth-quarter drives for the Chargers.

— Jalen Hurts, Eagles, passed for a career-high 387 yards and two touchdowns in a 42-30 loss to Kansas City.

— Taylor Heinicke, Washington, went 23 of 33 for 290 yards with three touchdowns and no interceptions in a 34-30 win over Atlanta.

— Patrick Mahomes, Chiefs, threw for 278 yards and five touchdowns in the win over the Eagles.

— David Montgomery, Bears, rushed for 106 yards and two touchdowns before leaving a 24-14 win over Detroit with a knee injury.

— Tyreek Hill, Chiefs, had 11 receptions for 186 yards and three touchdowns in a 42-30 victory over Philadelphia.

— Darnell Mooney, Bears, was quarterback Justin Fields' favorite target, catching five passes and accounting for 125 of Fields' 209 yards in a 24-14 win over Detroit.

— Terry McLaurin, Washington, had six catches for 123 yards and two touchdowns in a 34-30 victory over Atlanta.

— DeVonta Smith, Eagles, had a career-high 122 yards receiving on seven receptions in the loss to the Chiefs.

— DJ Moore, Panthers, had eight receptions for 113 yards and two touchdowns in a 36-28 loss to Dallas.

— Cordarrelle Patterson, Falcons, caught five passes, three of them for touchdowns, and finished with 82 yards in a 34-30 loss to Washington.

— DeAndre Carter, Washington, returned a kickoff 101 yards for a touchdown in Washington's 34-30 win over Atlanta.

— Matt Prater, Cardinals, made a 55-yard field goal, two other chip-shot kicks and four extra points in a 37-20 win over the Los Angeles Rams.

— Trevon Diggs, Cowboys, had two interceptions in a 36-28 win over Carolina.

— Randy Gregory, Cowboys, had two of his team's five sacks against the Panthers.

— Quinnen Williams, Jets, had two of his team’s seven sacks in a 27-21 overtime win over Tennessee.

Tom Brady became the NFL's all-time passing leader in the first quarter of his return to New England, breaking Drew Brees' record with a 28-yard pass to Tampa Bay Buccaneers teammate Mike Evans in the first quarter against the Patriots. Brady finished the game with 80,560 yards. Brees had 80,358. ... Brady also became the fourth quarterback with wins over all 32 teams, joining Brees, Brett Favre and Peyton Manning. ... In his return to Philadelphia, coach Andy Reid won his 100th game with the Chiefs, becoming the first coach to win at least 100 with two teams. Reid had 140 wins with the Eagles. ... The Baltimore Ravens had at least 100 yards rushing for the 43rd consecutive game, tying the record set by the Pittsburgh Steelers from 1974-77. Instead of kneeling down on the game's final play, Lamar Jackson gained 5 yards to give the Ravens 102 and prolong the streak. ... Ben Roethlisberger surpassed Dan Marino for the sixth-most passing yards in NFL history. He also became the eighth quarterback with 400 touchdown passes. ... Aaron Rodgers threw his 420th TD pass, tying Marino for sixth all-time. ... Seahawks quarterback Russell Wilson won his 100th regular-season game. Peyton Manning (105) is the only other quarterback with at least 100 wins in his first 10 seasons.

The Bills' 40-0 win over the Texans was their second shutout of the season, the first time they've done that since 1990, and Buffalo also scored 40 or more points in consecutive weeks for the first time since that same season, when the Bills reached the Super Bowl. The last team to post two shutouts by 35 or more points was the 2009 New York Jets. ... Dallas' Trevon Diggs had two interceptions and leads the league with five while becoming the first Cowboys player with a pick in each of the first four games since linebacker Chuck Howley in 1968. ... Carolina's Sam Darnold became the first quarterback in NFL history with five rushing touchdowns in his team's first four games. ... Chiefs quarterback Patrick Mahomes improved to 40-10 as a starter, joining Ken Stabler (40-9-1) as the only QBs in the Super Bowl era to win 40 of their first 50 starts.

Stefon Diggs is already established as one of the league's best receivers. Now his brother is emerging as one of the NFL's best cornerbacks. In his second season with the Dallas Cowboys, Trevon Diggs has a league-leading five interceptions through four games, including two in Sunday's 36-28 win over the Carolina Panthers. He joins linebacker Chuck Howley (1968) as the only Dallas player with five picks through four games.

“Turn on the tape,” Cowboys quarterback Dak Prescott said. “Watch the guys he’s following week in and week out, the best player. That’s a guy I’ve been going against since the spring, I know the standard he holds himself to and he’s going to continue to get better.”

The Giants and Jets both started the season 0-3, but avoided 0-4 with overtime wins. Saquon Barkley scored on a 6-yard run on the first possession of overtime to give the Giants a win at New Orleans. Playing at the New York teams' shared MetLife Stadium home, the Jets needed a little more good fortune, beating the Titans in OT after Randy Bullock's tying attempt from 49 yards was wide left.

With Deshaun Watson out indefinitely because of harassment allegations and resulting legal trouble and Tyrod Taylor injured, the Texans have a rookie quarterback who wasn't expected to start right away playing for a first-year head coach. The struggles have been predictable, but Houston hit a low point in a 40-0 loss at Buffalo. Davis Mills went 11 of 21 for 87 yards, threw four interceptions and was sacked three times.

Broncos quarterback Teddy Bridgewater suffered a concussion late in the first half against the Ravens and was replaced by Drew Lock. ... A play earlier, the Broncos lost receiver Diontae Spencer to a chest injury. ... The 49ers turned to rookie Trey Lance at quarterback after Jimmy Garoppolo suffered a calf injury. ... The 49ers also lost kicker Robbie Gould to a groin injury in warmups, forcing punter Mitch Wishnowsky to handle placekicking duties. ... Chicago running back David Montgomery had 106 yards rushing and two touchdowns before injuring his knee in the fourth quarter of a win over Detroit. ... Washington tight end Logan Thomas played five snaps against Atlanta before leaving with a hamstring injury. ... Vikings defensive tackle Michael Pierce will get an MRI on his injured elbow.

“This wasn’t just Davis Mills. Everybody around Davis Mills, nobody played well around him,” Texans coach David Culley said of his rookie quarterback after a 40-0 loss at Buffalo. “You can put Joe Montana out there, and the way we played today, you’re not going to have any success on offense.”

“Oh yeah, 100% my call,” Ravens coach John Harbaugh said about the decision to run the ball instead of kneeling down on the final play of a 23-7 win over the Broncos, a play that pushed the Ravens over 100 yards rushing for a record-tying 43rd straight game. “That’s one of those things that’s meaningful. As a head coach you have to be mindful of your team and your players and what it means to them. It’s a very, very tough record to accomplish and it’s a long-term record. ... As a head coach you do that for your players and you do that for your coaches and it’s something they’ll have for the rest of their lives.”