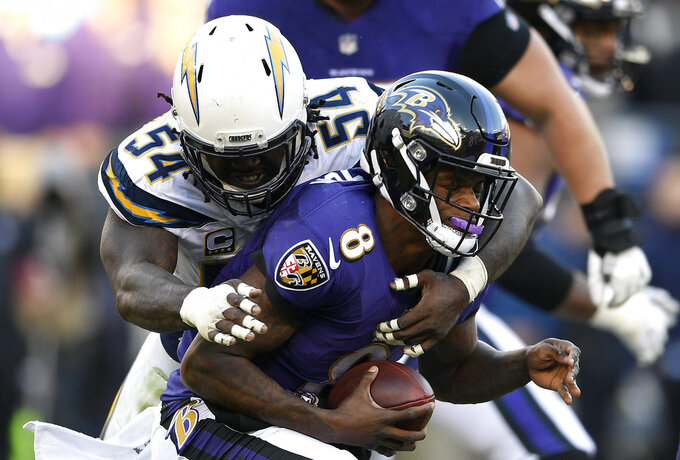 CHICAGO (AP) — Maybe it was the absence of all those high-powered offenses on byes.

Perhaps it was the jitters for some younger teams, particularly their quarterbacks: Deshaun Watson, Mitchell Trubisky and Lamar Jackson.

Or maybe defense actually still has a place in the NFL, especially in the playoffs.

The most points anyone scored during wild-card weekend, when only Dallas won at home, was 24 by the Cowboys. In total, 145 points were scored, an average of 36.2 per game. The Chiefs averaged 35.3 all by themselves this season.

As Nick Foles — St. Nick in Philly for his clutch work as a relief pitcher and, oh yes, as a Super Bowl champion — observed following the Eagles' 16-15 comeback escape in Chicago : "Our defense really kept us in this game. It was a hard-fought defensive battle tonight and we were able to come up big in the end."

Or as coach Anthony Lynn noted following the Chargers' 23-17 win at Baltimore in which Los Angeles forced three turnovers and held the Ravens to 229 total yards, 90 on the ground: "Our defense was outstanding. We held that team down to 100 yards rushing. No one has played that team the way our defense played today. I was really impressed with the way our defense stepped up."

All the winning defenses will need to step up a few more rungs next weekend. Consider that aside from the Chiefs scoring 565 points this season, the Rams got 527, the Saints 504 and the Patriots 436. All of them will be at home.

While the NFL loves to tout all the scoring records set during the 2018 season, all of the yards gained and general wide-openness of weekly contests, when it comes down to deciding who winds up in the conference title games, maybe the guys trying to stop those video-game offenses will have a say.

It's unlikely that any of the wild-card victors can win a Super Bowl without being balanced. The Eagles will need to play far better defense in the Big Easy or Drew Brees will have, well, an easy time picking apart a secondary playing mostly backups. The Chargers likely will require more than 24 points to succeed in Foxborough, where the Patriots had the NFL's only unbeaten home record this season.

Dallas needs more offensive imagination and another huge performance against the run to win at L.A. Only Indianapolis, which was superb on both sides of the ball at Houston, displayed enough of the formula needed to get the conference championship game.

Then again, the Colts must slow down All-Pro quarterback Patrick Mahomes and crew at Arrowhead Stadium.

"We're not worried about who's on the other side," said Colts rookie linebacker Darius Leonard, himself an All-Pro. "We always talk about whoever's playing on the opposite side is gray matter. So we're always talking about doing what we can do and controlling what we can control, and that is going out, playing each play, play by play and going from there."

What about the four teams coming off byes? Which ones are best suited to come up with a solid defensive showing?

The two most suspect are the Chiefs and Rams. Sure, KC averaged all those points weekly. It also yielded 26.3, including 43, 54, 29 and 38 in its losses, and the 421 points opponents scored by far were the most any playoff team surrendered. The Rams allowed 384, easily the most of any NFC postseason qualifier; L.A. had seven games in which it allowed at least 30 points.

New England also can be vulnerable on defense even though it's been stingy at times when it comes to giving up touchdowns. The Patriots aren't a force in the pass rush and against quality quarterbacks the linebackers and secondary have had trouble in coverage.

New Orleans probably has the most well-rounded roster, with some standouts on defense to accompany Brees and All-Pro receiver Michael Thomas and the terrific running back duo of Alvin Kamara and Mark Ingram.

And don't think defense won't be needed through the rest of January and into February.